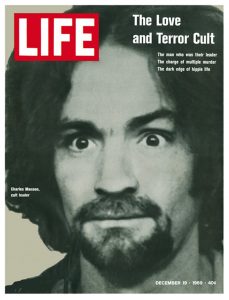 [1]Charles Manson was a scapegoat for the sixties counter-culture and he became a false Messiah for the seventies, eighties, nineties, and naughties counter-cultures. His real meaning can only be discerned by understanding these two equally imaginary poles of social function that he was compelled to occupy during his decades of imprisonment. The fact that Manson himself was keenly aware of this process of projection and that he actively sought to manipulate it does not attest to evidence of demonic powers but neither does it attest to the machinations of a victimized magus. In truth, he was neither demon nor saint but a small man filled with boundless energy who was never able to manifest anything significant.

In setting out these polar positions we are not trying to suggest that we should avoid exaggeration and look for truth in a median position. Because really it’s only possible to have an extreme response to Manson. But this is because we get blinded by the reflected light from the mirrors that he throws up against all observers. He was a gifted individual who intuited a great deal of esoteric knowledge, but his story is a salutary lesson in what happens when such knowledge is left completely undisciplined.

The story of Manson is well known. His “followers” (as we must still refer to them) carried out the Tate-LaBianca killings in 1969, allegedly (and almost certainly) under the guidance of Manson. His aim was to make the killings appear to be the work of black criminals in order to provoke a backlash on the part of whites and thus spark off a race war: Helter Skelter. When he and his followers were arrested at the Spahn Ranch, the whole setup of the Family appeared to be a direct, if dark, reflection of the communal, psychedelic optimism that had become increasingly familiar through the sixties. His trial was notable for the fact that he was never even accused of being present at the scene of the murders. He was cast as a Svengali figure, a cult leader whose magnetic personality could warp innocent, middle-class teenagers’ minds to such an extent that they would stab a pregnant woman for him and write his slogans on the wall in her still warm blood. Manson had a hypnotic, telepathic ability to affect causation at a distance. This psychic ability is central to the Manson myth, and when combined with the bloody violence it generates an atavistic power.

It’s always been difficult to know whether those of Manson’s followers who were “reformed” during their long prison spells have actually achieved any sort of redemption. There seems to be a certain cynicism on their part in disavowing the extremity and intensity of the Family’s experience, not unlike Myra Hindley’s repeated appeals for mercy. Charles never disavowed his madness, and he was obviously consumed by it, but that somehow points to a sort of integrity. One assumes that he was fundamentally sane but that he refused to accept sanity. He insisted on a willful refusal to live within consensus reality. His madness then should perhaps be understood as a technique.

His philosophy was platitudinous, new-age gibberish. The whole of the ATWA and Universal Order ideas are essentially specious stances that would be laughed at if they were not attached to Charles’ evil stare and murderous power. Any coherence that might be found within them largely comes from the later followers of Manson, such as James Mason and Boyd Rice. These later appropriators of Manson’s aura foreground the dialectical necessity of undermining the American cultural and political System and posit Manson as Loki, the great trickster who opposes and destroys Valhalla (and it was only a few years earlier that Camelot had fallen in America). But positioning Manson in such a role of adversary only completes the circle by adding a Yin to the already existing Yang. Charles’ exhortation to, “get back to the horse,” makes no sense in the world outside his head and reveals the real reactionary nature of his thinking. His philosophy was certainly not “evil.” It was a mere counter gesture to the unbridled optimism of the sixties and as such was contingent on that optimism. The reality is that he was constrained by the conditions of possibility of his era. He knew this himself and his forehead swastika was ultimately nothing more than an inversion of the symbols of consensus “good.” Real progress comes from going beyond this duality.

When Charlie said, “prison’s in the mind; can’t you see I’m free?” he was expressing a wish more than stating a truth. He refused to accept any social convention, and he refused to backtrack from this position even when his life was totally constrained by the prison system. But this refusal cuts both ways. By never backing down from his stance of refusal Manson did in a sense posit a notion of psychic freedom. But his refusal was so all-encompassing that it also constituted a refusal to live at all in any meaningful sense. This is not to say something so reactionary as that he should have compromised more with social convention, but more that he was unable to distinguish healthy refusal from sick refusal. And furthermore, that despite his projection of a cosmic gnosis through ATWA, he was unable to accept the world as it actually was; the world of nature that he deified was a fiction inside his head. It was a pastoral idyll that may have existed just prior to his unhappy childhood.

In much of the news footage of Manson, he exaggerates his “evil” stare to project and augment his sinister aura, again a clear sign that he knew the nature of the quasi-mythic role he was carving out for himself. But whereas some might see his glare as evil, I see the defiant stare of a teenage boy pushing against parental boundaries. And this in a sense was the prison that Manson was really locked in for all of his life: the mad absence of a social context. In the absence of a father and with a delinquent mother he never experienced the normal play of finding and pushing through ethical boundaries. Instead he found that the first boundaries he encountered were legal, and from that point on his fate was fixed in the stars. What he really needed were obstacles to overcome; personal, emotional, and social obstacles. But growing up through the sixties he found that barriers were everywhere falling away. A ball of violent energy like Manson desperately needed something to fight against, and in doing so to create the boundaries of his own identity. But instead he found that everyone else was self-indulgently allowing all barriers to melt softly away. Men like Manson need to smash through them and find their limits. Instead, he only encountered barriers at the extremity of behavior, and he subsequently lacked any ability to understand nuance. He could only express himself through extremity.

Is all of this just cod psychoanalysis? Maybe so, but then what is, “we are your children,” if not the extrapolation of a familial drama to a national legal/cultural issue? Manson was always playing out primal conflicts, some archetypal, some personal, and his function in culture is as a chaotic force that can be swept away for a short time but that will always come back again. What he perhaps never realized was that he was not a channel or a creator of this chaotic force but that he was simply swept along by it. He was able to master some of the techniques of charisma and control, but he could not separate them from his own undisciplined impulses. Everything for him was a projection of libido, and so his ambition of generating a race war was an embarrassing failure. Now that he has died, the Manson myth will begin to lose its power as he is no longer able to animate it. Ultimately, he played a part within the American system, albeit the role of the trickster, but he lacked the discipline and focus to get beyond the confines of the system and to transcend its logic. Perhaps that task will fall to someone else?