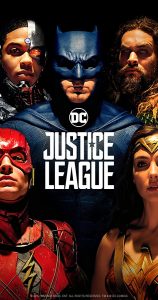 [1]Watchmen [2] is the greatest superhero movie of all time, and when it was released, its director Zack Snyder was poised to follow Christopher Nolan into the first rank of directors working today. But instead, he has directed an ever worsening series of turkeys: Sucker Punch [3], Man of Steel [4], Batman v Superman [5], and now Justice League, which is one of the worst movies I have ever seen: derivative, dumb, and dull. An assault on the senses and an insult to the intellect. It is also one of the most expensive movies ever made, costing an astonishing $300 million. It is really rather amazing that a director of Snyder’s proven talent, with a solid cast and a $300 million budget, could not have turned in a better movie. Clearly, there’s a lot of rot and a lot of ruin still left in Hollywood, and the sex scandals are just the beginning.

Justice League is a critical and commercial flop. Some people are trying to deflect the blame onto Warner Bros. and Joss Whedon. It turns out that earlier this year, Snyder’s 20-year-old Chinese adopted daughter, Autumn, committed suicide. (Snyder had eight children, four natural and four adopted.) Snyder took some time off to be with his family, and Warner Bros., which deemed the movie too long and too dark, brought in Joss Whedon for rewrites and reshoots. The problem, however, is not with Whedon’s superficial changes but with the basic script, which is utterly derivative, and with the characterization, which is laughably shallow.

Stop me if you’ve heard this one before. In remotest antiquity, a dark lord from another world named Steppenwolf (hold your laughter) tried to conquer the world with the aid of three magical “Mother Boxes” and an army of zombie-cyborgs called parademons. However, the races of the earth — the Olympian gods, Amazons, Atlanteans, and men — came together in an alliance to defeat him. The Mother Boxes were wrested away from Steppenwolf, who vanished. The Mother Boxes, which only worked in tandem, were then separated and placed in the care of the Atlanteans, the Amazons, and the kings of men.

After untold thousands of years, however, the death of Superman somehow reactivated the mother boxes, which called Steppenwolf back to earth. Of course, this is a ridiculously arbitrary plot turn, since Superman was only a recent arrival on earth, which raises the question of what kept the Mother Boxes “sleeping” for the untold millennia before his arrival. But never mind. The dark lord Steppenwolf is back with his parademons searching for the magic Mother Boxes that will allow him to conquer the world. To stop him, a league must be created, bringing together an Atlantean (Aquaman), an Amazon (Wonder Woman), and several humans, including Bruce Wayne/Batman, Barry Allen/Flash, and Victor Stone/Cyborg.

Yes, thus far, it is just a retelling of The Fellowship of the Ring.

But the combined efforts of the Justice League are still not enough to defeat Steppenwolf, so a deus ex machina is required. Thus they use one of the Mother Boxes to resurrect Superman, who whooshes in to save the day. There are lots of CGI battles, which basically feel like being trapped inside a pinball machine, and finally Steppenwolf is sent packing, no doubt to return some day when bidden by the dark lords of Hollywood to harvest more shekels from the goyim.

Okay, okay. But aren’t there are only so many plots? And can’t a derivative plot still be salvaged by interesting characters and dialogue? This is true, but Justice League fails there as well. We have already been introduced to Batman, Superman, and Wonder Woman. Thus all Snyder really needed to do was breathe some life into Aquaman, Cyborg, and Flash. And what a lousy job he does. Aquaman is the most one-dimensional character of all. He is covered with tattoos, has long hair, and swigs whiskey from a bottle. So we know he’s badass. He’s angry at his mommy. He likes to help people for some reason, but thinks he does it best alone. Cyborg is a black man with a stratospherically high IQ which he inherited from his black scientist father. No regression to the mean in this universe. And Flash, just like Lex Luthor in the last movie, is a shrimpy, neurotic, fast-talking, cowardly Jewboy. (What’s Zack Snyder trying to tell us?) There’s no depth, nuance, subtlety, or humanity in Justice League, just plastic robots, batteries not included. The established characters also seem hollowed out and flattened. But with no human beings at its core, the movie’s CGI battle scenes become a tedious, emotionally uninvolving assault on the senses.

One of the running theses of my career as a movie reviewer is that someone in Hollywood is reading anti-modern, Traditionalist Rightists and recognizes that we represent the most fundamental negation of liberal humanism and thus the perfect supervillains. Justice League nods in this direction at the beginning when Wonder Woman foils a group of white “reactionary” terrorists who want to blow up the Old Bailey in London. Also, under the opening credits, which are a montage of social chaos after the death of Superman to a cover of Leonard Cohen’s “Everybody Knows,” we see a white man with shaved head menacing a shopkeeper in a hijab and her child. But like everything else in this film, even this feels perfunctory, phoned-in, and fake.

I hope the failure of this movie and the suicide of his daughter will cause Zack Snyder to take some time away from Hollywood to rethink his career. The great weaknesses of his recent films have been plot and characterization. His best films, 300 [6] and Watchmen [2], were based on classic graphic novels, and from that high starting point, he actually improved upon them, both in terms of visualization and plot. But Snyder’s career since then seems almost like a controlled experiment to establish that all the directorial and technical wizardry in the world can’t make a compelling movie if the plot and characterization are lacking, nor can brand-loyalty and PR-puffery turn it into a success.

The fact that Justice League has bombed is proof that there is still some justice in the world.