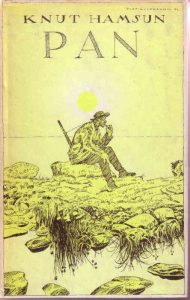 Knut Hamsun (1859-1952) is considered to be Norway’s greatest novelist. Along with Ibsen and Strindberg, Hamsun brought Scandinavia to the forefront of literary modernism. Eschewing realism for penetrating psychological insights, Hamsun’s subjective style proved to be extremely influential for a variety of writers ranging from Thomas Mann to Ernest Hemingway and even to Isaac Bashevis Singer.

Hamsun traveled widely and spent several years in the 1880s in the United States where he taught and gave lectures. He was highly critical of the lack of racial awareness among whites and opined in his 1889 book The Cultural Life of Modern America that “[I]nstead of founding an intellectual elite, America has established a mulatto studfarm.”

Hamsun’s nationalism and animus towards the Anglo-Saxon world was exacerbated by British atrocities against the Afrikaners in the Boer War. It was only natural, then, that Hamsun greeted with great enthusiasm the rise to power of Hitler and Nazi domination of Europe, including the occupation of Norway. After World War II, the Norwegian government brought treason charges against the author, but except for a fine, they were dropped due to alleged mental incapacitation. Hamsun, however, continued to write lucidly until shortly before his death in 1952.

Pan (subtitled From Lieutenant Thomas Glahn’s Papers) was published in 1894 and utilizes many of the thematic and literary devices that have become associated with Hamsun’s style: a solitary wandering protagonist, an acute sense of nature and its spiritual dimensions, the contrast between the health of the rural environment and the decadence of the city, a profound subjectivism, and an almost cinematic approach to narrative that embraces interior monologues and flashbacks.

The protagonist of the novel is a superannuated army officer who has rented a hut in the north of Norway near a small coastal village. He hunts and fishes for subsistence and lives alone, save for his dog Aesop. The title Pan refers to the figure of the Greek god that is embossed on his gunpowder horn, but it is also indicative of the unfettered sexuality that the god represents. Glahn meets Edvarda, the daughter of a wealthy local merchant, and immediately falls in love with her. While Edvarda seems to requite the Lieutenant’s affection, she is, in reality, just playing with his affections, and is holding out for different prospects of a more pecuniary nature. Glahn also becomes involved with Eva, a passionate working-class woman who, unbeknownst to the Lieutenant, is married to the local blacksmith. Unable to deal with the hypocrisy and artificiality of society, Glahn is forced to leave his forest idyll after a series of tragic events. Travelling to India, where he hunts for big game, Glahn meets his ultimate fate, which I will leave up to the reader to discover on his own.

A number of fine English translations of Pan are available and the W. W. Worster translation is available on Kindle for free from Amazon [2].