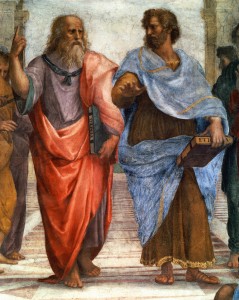 Plato and Aristotle from Raphael’s The School of Athens

Among my favorite “radical centrists” is the British commentator Carl Benjamin, better known as Sargon of Akkad. He’s enjoyable to listen to, not merely for the easy sound of his voice and his superior accent, but for his uncompromising honesty, even when he is wrong.

Back in March of last year, he published a video about the Alt-Right [2], and his summary was that it was fundamentally an idea space, protected from the policing of progressive gate-keepers.

He had some other things to say as well, of course. Like most radical centrists, Benjamin made the usual comparisons between the far Right and the far Left. But the heart of the description — an idea space — was spot on.

This was a particularly important point for me. I had been attending a local community college after departing from the military with the goal of becoming an academic. I loved debates, as a participant or an observer, and I spent hundreds of hours in my early 20s sitting on my laptop, listening to Christopher Hitchens take on William Lane Craig on religion, or Douglas Murray going toe-to-toe with Tariq Ramadan on Islam, Europe, and immigration. As someone who loved exploring controversial and interesting ideas for their own sake, higher education seemed to be the perfect place to go.

For those who haven’t been to an institute of higher learning in a decade or three, the transformation in purpose across universities is hard to pinpoint, as many of the superficial trappings of academia have remained steadfastly visible. The university architecture, the modern-art courtyard centerpieces, the tweed-clad professoriate, the young students milling about in the grass carrying sling-bags — all of that’s still there. Open up the hood and examine the engine, and much has been rearranged . . . or so I imagine, from the stories I hear of academia from years ago.

The price of universities has exploded. By itself, it’s a phenomenon worth exploring. Has everyone suddenly gotten smarter? Are Millennials Generation Z more curious than previous ones? Neither of these seem intuitively likely, and conversations with most college students makes the hypothesis sound even less plausible.

The truth is that the telos — the purpose — of the University has changed, in at least two different ways. First, it has become career-oriented. The university is not about learning. It is not about exploring ideas, debating, experimenting, and adding to the canon of Western thought. It still occasionally does that, but only as a secondary or tertiary goal, rather than as its summum bonum. It’s simply more lucrative to make campus into a job-preparation program, and it turns out that for most people, that’s more important. And it’s hard to fault them for it. The academic is a rare personality type, and most people aren’t it.

But an institution cannot serve two masters, and what is necessary for the intellectual’s development — things like debate, intensive research, questioning premises, and the like — are impediments for the prospective employee en route to a future career. They need their certification so they can get on with their lives, and unnecessary detours between them and that goal are not merely unwanted: they are expensive.

The intellectual rigor of the academy is now in opposition with the means of production for the academy: churning out degrees. The more the better, never mind what becomes of the name of a Bachelor’s degree, a Master’s degree, or — heaven forbid — a Doctorate.

That’s the first change. Economically, schools can make more money catering to careerists than to intellectuals. Their culture reflects this, in terms of the amount of time for controversy they’re willing to entertain. We’ve got a mission here.

Never mind if the mission of the University fades away for the benefit of future coders, engineers, business owners, and HR managers with degrees in unrelated majors.

The second change is an ideological one. Anyone who reads Counter-Currents is probably very familiar with the Left-wing bias of Universities, but it is even becoming obvious to radical centrists as well, even to other Leftists. The progressive politics of universities are not, however, adequately summarized merely as “Left-wing.” The sorts of people that end up in charge of things — often by force of will alone, and via the administrative bureaucracy, rather than the classroom — are the types who want to police other people’s language [3]. These are Social Justice Warriors, propelled by a particular personality type that is incompatible with good-natured debate and serious ideological exploration. Their company, in fact, is downright dangerous in such pursuits [4]. For them free speech itself is controversial, never mind traditionalism in opposition to rationalism as an epistemological starting place. And just forget about having an “honest conversation” about race.

So what is left for the genuine intellectual? Where can the would-be-academic turned autodidact go, if the institutions once built with them specifically in mind are no longer able nor interested in providing that service anymore?

We fellow travelers can do what students, pilgrims, and philosophers have always done. We can search out our own teachers, and choose them based upon their merits and their ability, rather than on the words and traditions of the academically disinclined and the intellectually disengaged.

For me, personally, Counter-Currents has been one of these teachers . . . or perhaps a whole building of my own private Academy. Most importantly, I have discovered two mentors and a friend (Greg Johnson, Jack Donovan, and Aedhan Cassiel, respectively), though the more I read, the more I suspect that short list may grow over time. Collin Cleary’s What is a Rune? Is on my bedside table, just beneath Cicero, Rawls, and Ernst Jünger.

Here, I can learn about history, philosophy, psychology, sociology, literature, poetry, music, and contemporary culture, at levels matching or exceeding every college course I ever attended. Even compared to other Alt Right sources (Vox Populi, Chateau Heartiste, LessWrong, /pol/, etc), which all in their own ways seek to preserve this learning space, Counter-Currents represents the peak in content quality. Only TakiMag and the Occidental Observer come close.

Even with the fluidity of the internet, time is a critical factor in the success of institutions. Ceteris paribus, a university with 500 years of ingrained experience, worn into the stones and pathways of its workings, will provide more and withstand more than an institution of only 5 months.

Counter-Currents is just over seven years old. That’s enough time for it to have established itself, acquired some extraordinary talent, and put out some excellent content, both on the website and at meetup events. It is not enough time, however, to develop the resilience of Harvard, Yale, Oxford, or even most existing, formerly-academic institutions. That is going to take more time, and more resources.

The idea spaces that we once had have been taken over, and we probably won’t get them back.

Perhaps the best way to help cultivate and preserve the new intellectual idea space is simply to use it. For me, participating in the discussion is something I simply can’t not do; saying I “must” do it doesn’t quite capture my inability not to explore the ideas and arguments now taboo in academia. Naturally, this culminated in contributing a few articles, despite being vastly underqualified relative to most of the other writers here. But simply using it — reading, sourcing, or just occasional browsing — is helpful.

But another way to help is to give money [5]. A college degree may cost tens of thousands of dollars in tuition alone. A few dollars a month towards the one of the best new guardians of the intellectual traditions of the West is, to put it mildly, a worthwhile investment. A culture without an idea space to explore the most prescient and important subjects will stagnate and die . . . and maybe even worse, it will simply become a boring and a dull place.