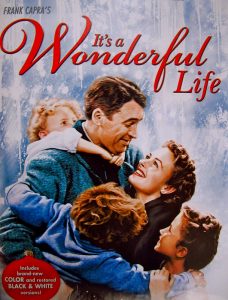 It was never really wonderful.

A few years back—let us say, forty—some TV boffins decided there was a perfect and archetypal Christmas film that must be broadcast every Yuletide season. And that film was the disturbing and surreal It’s a Wonderful Life with James Stewart. A downer-fable about failure and suicide, it flopped resoundingly with critics and public alike when it came out in 1946. Director Frank Capra himself counted it among his least favorite efforts. Personally I’ve never met anyone who really likes the movie.

Yet year after year, the programming executives continue to ladle this brimstone and treacle down our gullets. It’s good for us, I suppose is the idea.

What gives here? I think the basic problem with the film is that it is always presented to us as a wholesome, uplifting, “family” movie when really it is nothing of the sort. It’s a Wonderful Life is basically a noirfantasy that has a Christmas tree at the end. It’s the story of a man whose life has gone belly up. But before he jumps off a bridge, he gets to visit an alternative world that is even more dystopic than his own real life has been. The bleak moral here seems to be, Things could always be worse!

Looked at as classic film noir, the movie begins to make some sense. Sad-sack George Bailey (Stewart) is trapped in a small town from which he can never escape. It’s a generic, claustrophobic Hollywood-ersatz small-town, bearing some resemblance to the Santa Rosa where widow-murdering Joseph Cotten hides out in Hitchcock’s Shadow of a Doubt (1943). The female characters are played by the sultry, young Donna Reed, eventually to find stardom as a barely disguised prostitute in From Here to Eternity; and eternal floozy Gloria Grahame, whose character will get her face scarred with hot coffee in The Big Heat (both 1953). 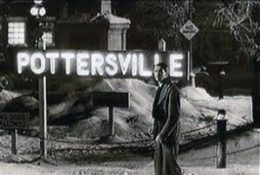 [2]When Stewart is led through his nightmarish alternative-reality, it all takes place in Nighttown, with a premise and setting only slightly more fantastical than Richard Widmark’s scheme to promote Greco-Roman wrestling in the nighttime London of 1950’s Night and the City. (In that film, coincidentally, Widmark does end his life while falling off a bridge.)

Now really, there’s nothing wrong with a nice noir film for the Christmas season. I just wish the TV folks would see It’s a Wonderful Life as the dark Forties drama it really is, and stop pushing it every year as a wholesome and uplifting “family movie.”

And for your noirish enjoyment, here are some other dark treats that bear (re)watching, with a couple of Christmas toddies inside you.

“Do you have a valediction, boyo?”

This came out at the end of 1997, so you may want to call it neo-noir or homage-noir, but it’s true noir nonetheless. And opens with a Christmas party—in a police station!

Based loosely on a lurid, sprawling novel by James Ellroy, L.A. Confidential’s plot outdoes Raymond Chandler in dense incomprehensibility. The two rival cops (Russell Crowe and Guy Pearce) actually halt their fistfight 2/3rds of the way through so they can explain to the audience what the hell is going on.

Best scenes: 1) bisexual Jewish D.A. Ron Rifkin is hung out his window by Russell Crowe until he confesses to his crimes; 2) suave detective Kevin Spacey gets offered a cup of tea at his police chief’s home, and instead receives a bullet to the heart. You know his famous last words: “Rollo Tommasi.”

The Boy with Green Hair 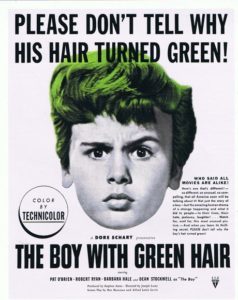 [4]Surely one of the strangest “social dramas” of the postwar era, this 1948 offering was one of the last films produced by Dore Schary at RKO before he moved on to head up MGM. (After MGM, Schary spent many years as national director of the Anti-Defamation League of B’nai B’rith.)

The script shoots off endless barbs about the sin of “prejudice.” They all misfire because—well, just look at the title! Is this a kiddy comedy? Audiences must have thought so initially, then they stayed away in droves.

The film opens with a serious Robert Ryan interrogating a bald kid—Dean Stockwell, many decades before Blue Velvet. This clues us in that the movie’s not only going to be grimly noir, but prefigure David Lynch as well.

Little bald Stockwell has just endured two awful blows: first he discovers he’s an orphan (his parents supposedly got killed while rescuing “war orphans” in Europe), and then he wakes up with green hair!

It’s never explained why or how his hair turned green. Instead we get a fantasy scene in which a poster of war-orphan children comes to life.

Stockwell is told that his green hair is actually a badge of honor. The green color will remind people that there should be no more war—or war orphans! (Wut?)

The story is set in the same generic (California) small town we’ve seen so many times, full of gossipy busybodies who tell their kids to stay away from the Stockwell kid, ’cause this green-hair disease “might be catching.” Eventually the crazed, bigoted provincials chase him into a barbershop where his mop is buzzed and the barber anoints his scalp with after-shave.

Nothing Christmassy here at all, except for the hair, and a forcibly jolly Pat O’Brien who plays an ex-vaudevillian singing waiter with whom Green-Haired Boy lives . . . again, for reasons that are never made clear.

A few years after this film, director Joseph Losey got chased out of Hollywood for being a Commie. He made some charmingly weird films in England (The Servant, 1963) but nothing ever as weird as this.

“I loved her like a rabbit loves a rattlesnake.”

Here is the ur-classic noir, from 1944, with a script by Raymond Chandler (and director Billy Wilder, who sat with him every day for months, so Chandler would be sober and clear-headed enough to finish it). Chandler couldn’t do an intelligible plot to save his life, but the dialogue here will live forever.

Insurance salesman Fred MacMurray schemes with ex-nurse Barbara Stanwyck to kill her husband. A perfect crime, until they realize they must kill each other to save themselves. Set in the 1930s, with good 1940s Los Angeles streetscapes and grocery stores. No Christmas decorations, but it rains so much we must be in a SoCal winter.

Based on the crime thriller by James M. Cain, using the same insurance-scam device Cain had also used in The Postman Always Rings Twice. Future TV dad MacMurray plays the lousiest heel he would ever play—at least until he showed up in Wilder’s 1960 The Apartment.

“Why they’ve got ten volumes on suicide alone. Suicide by race, by color, by occupation, by sex, by seasons of the year, by time of day. Suicide, how committed: by poison, by firearms, by drowning, by leaps. Suicide by poison, subdivided by *types* of poison, such as corrosive, irritant, systemic, gaseous, narcotic, alkaloid, protein, and so forth; suicide by leaps, subdivided by leaps from high places…” 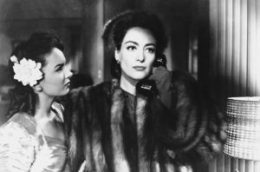 “I’d do anything for Veda.”

Superficially this 1945 warhorse is the tale of a self-made woman (Joan Crawford) who works her way up from housewife to restaurant tycoon. But it’s really about the heartbreak of raising a selfish, ungrateful kid (Ann Blyth) you can never say no to.

No, this isn’t a family picture at all. The male leads are stock characters played to a fare-thee-well by Zachary Scott (skinny, swishy, exploitative gigolo) and Jack Carson (aggressive, broad-beamed bully-boy).

Another adaptation of a James M. Cain novel, with Cain’s wilder flights of fancy made cheap and nasty for the silver screen. Example: when spoiled-girl Ann Blyth character runs away, she becomes a roadhouse chantoosie instead of making her operatic debut in the Hollywood Bowl (as in the book).