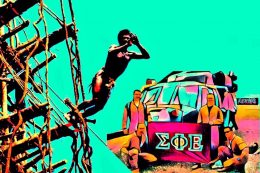 We live in a world in which loyalty, as a foundational social ethic, is eroding. Now, the problem isn’t just that particular, local, and naturally “rooted” forms of loyalty are declining. It’s that our entire set of ethical assumptions about how people should view their loyalties to those around them is changing—and the individual’s moral philosophy is changing as a result.

Part of the problem is that the moral pronouncements of our elites have, over time, trickled down. Einstein, for example, claimed that nationalism is “an infantile disease . . . the measles of mankind.” [1] His plan for eliminating the disease began with the erasure of national borders, and ended with the establishment of a world government with authority over individual states. [2]

Though industrialized nations undergoing hardship tend to experience the opposite trend, a BBC World Service poll conducted in 2016 found that worldwide, identification as a “global citizen” rose significantly over the five-year period preceding the report’s publication. [3]

Leftists may want to celebrate this as a step towards a more interconnected world. But a 2015 study found that “the more individuals perceive themselves as ‘citizens of the world,’ the less likely they are to contribute to collective public goods and the more likely to hitch a ‘free ride’ on the contributions of other citizens. [4]”

As Huntley Haverstock wrote in “Love of All is Love of None [5]“, these individuals do not truly love foreigners more—they simply love their neighbors less. We can see this demonstrated unequivocally by the fact that “world citizens” do not donate the same amount of time and resources to their countrymen and then give extra to everyone else—they simply don’t give as much to anyone at all. Because nationalist commitments are so quaint, you see, they’re happy to let their countrymen do all the work while they coast through the commons.

For things like love and loyalty to exist at all, they simply must be local, particular—and exclusive. A man can no more become a true “citizen of the world” than he can literally “fall in love” with all of humanity—he either falls in love with a particular woman, or not at all. This research supports Teresa May’s statement in support of the Brexit vote that “if you believe you are a citizen of the world, you are a citizen of nowhere.”

So why is this happening?

Libertarians have a tendency to treat questions like these as linear cost-benefit analyses. They also tend to demand granting the assumption that the individual is able to determine how various decisions would change the balance on his personal subjective profit spreadsheet better than anyone else. These assumptions inevitably lead to the conclusion that anything that interferes with the individual’s freedom to make any decision he wishes necessarily, by definition, makes the world poorer off, by making people less able to maximize their own preference-fulfillment.
Were we approaching the question with these assumptions, we would naturally have to assume that the costs of local citizenship must be exceeding the benefits—either because the costs have risen, or because the benefits have fallen. Proceeding from these premises, the answer would axiomatically have to follow that the solution is to either increase the benefits of local citizenship, or else reduce the costs—and once people see the costs and benefits of local citizenship change enough to make identifying as a local citizen profitable, then they will change the way they socially identify themselves accordingly.

However, what reality shows us turns out to be exactly the opposite: raising the costs of local citizenship is actually what would increase peoples’ valuing of rooted belonging in particular communities the most, not lowering them.

The libertarian assumptions are inoffensive so far as they go—they just don’t “go” far enough. While not strictly wrong in and of themselves, these assumptions leave so much out of real flesh-and-blood human psychology that they might as well be in the hands of someone who is willing to employ these, but only these assumptions alone, for understanding man. There are times when human beings simply do not “know themselves” from the inside, and third-party experiments can in fact reveal the real basis of human psychology and happiness far better than individual choice and introspection. There may even be times when “force” is the only way to get people to see and understand this for themselves.

What we can learn from college frat parties . . .

There are entire organizations devoted to trying to wipe out the practice of hazing. In hazing rituals, new initiates into fraternities (usually) are required by established members to go through trials which are often risky, dangerous, painful, or humiliating in order to secure their membership into the fraternity.

In the most extreme cases of brutal hazing [6], these rituals have given new members third-degree burns from boiling water, involved sexual abuse with knives, or have even killed people via alcohol overdose.

But pay close attention to the fact that these rituals, however, are completely and entirely voluntary. How then is it even possible that they could continue? And why is it usually men who most commonly employ and consent to the most brutal of these practices?

In fact, initiation into manhood in most traditional societies has always involved a degree of “hazing.” The South Pacific Vanuatu rite of passage into manhood involves requiring eight-year-olds to strip naked and bungee dive off of hundred-foot-tall rickety platforms while being strapped to the towering wooden contraption only by vines. Australian aborigines require fifteen-year-olds to be circumcised without anaesthetic and show no signs of pain. The Algonquin Indian tribe of Quebec has a rite of passage that involves being locked in a cage and given datura, a dangerous hallucinogenic whose effects—including racing heartbeats, amnesia, and insomnia—can last for twenty days. [7]

We can mock these kinds of rituals all we want, but the fact that practices like them are so universal should tell us that they reflect something extremely deep within the human (and particularly the male) psyche. Furthermore, in our very own society, where such rituals are lacking, we see men re-enacting them—to the consternation of university administrations across the entire country—the moment they set foot away from their parents’ roofs and get the chance.

One factor at play in these rituals is that people seem to judge the worth of things they possess according to what they had to pay to get them. Put another way: if you give someone something valuable for free, the fact that he got it for free will subconsciously cause him to view that something as being less valuable than he would if he had actually had to give something up in order to get it. Hazing rituals leverage this psychological phenomena in order to secure and increase loyalty to the group. And it continues because groups that practice forms of hazing stick around, while those that don’t are just less likely to.

Anthropologist Dimitris Xygalatas (say that three times fast) found that groups that went through “high-ordeals” bonded far more than those that went through “low-ordeals.” Struggling together made people closer. This is why fraternities haze. Why soldiers feel like they are kin.

We have a surprising number of studies on this, actually. Here’s another example:

People value their membership in fraternities because the struggle of high-ordeal initiation rites brings them closer, and because the price they paid to obtain that membership serves as a constant reminder of what that membership was worth to them. The same thing goes for the way soldiers value their status as soldiers, and feel a sense of kinship with other soldiers.

But citizens do not value their status as citizens in this kind of way. They do not feel a sense of kinship with other citizens. Why not? It’s because we give away citizenship for free, as if it were worthless—and this in turn causes people to behave as if it is.

We can leverage the same phenomena leveraged by fraternities and the military, however, simply by making “boot camp”-style participation in military training a precondition of obtaining voting rights for men.

In past eras, the requirement that one had to hold a certain amount of property in order to be eligible to vote probably went a long way toward cementing a form of unity among the voting members of society, because having to work to reach that point in life through active achievement serves as at least a degree of a certain kind of “hazing.”

Giving away full citizenship simply because someone passed a certain date on a calendar is most certainly one of many reasons for our continuing moral and social decline. We’ve devalued the meaning of citizenship and nationhood, making them become worthless precisely by treating them as if they are. And the only possible answer to this conundrum is to “haze” people into citizenship in precisely the same way we “haze” them into all other groups that people actually value throughout their lives in truly meaningful ways.

So why not a system of compulsory community service?

Look—nations are built through war.

They aren’t formed because people went on charity drives, or decided to clean up the local highway together, or fed some homeless people. They’re formed because people banded together to physically defend a territory as theirs, and succeeded. And none of the other charitable activities can even take place until this one has occurred to begin with.

Ian Morris’ War, What is It Good For? is one of my favorite books. Morris tells the story, in practical, real-world historical terms, of how all our notions of “individual rights” come about quite literally because of war. Like it or not, it is a historical fact that we have war to thank for the fact that anyone, anywhere, has any notion of “individual rights” at all.

More specifically: the only reason any society in human history has ever devised the notion that there should be rules for how people are allowed to treat strangers (like “not murder them”) is because people needed to stay united in order to successfully compete against an equally organized outside group. Once one group realized that there was power in numbers and that they could gain more from banding together to conquer their neighbors, the curtain had fallen.

And the scope of human groupings was at that point irreversibly destined to expand, either because this group conquered everyone or because everyone else would have to organize into equally large groups in order to successfully defend themselves against the threat posed by the first. Whether on the offensive or defensive side of this equation, however, these groups would obviously need to prohibit predation against group members by other group members in order to make the group cohesive enough to succeed in competition against those other groups.

It isn’t just that nations happen to have always been built by war, but that war is literally the engine driving the entire process whereby human beings have ever grouped themselves into “nations,” and even so much as conceived of the notion of establishing rules about how citizens of a nation could and should treat the fellow members of their nation at all.

It makes sense, then, that the process by which one establishes their membership in a nation would mirror the process by which nations form and come into being. One isn’t able to enjoy the advantages of citizenship in a First World country because of charity drives and clean highways and the like—but because those countries were built and enabled by war.

The truth is simultaneously horrifying and yet, somehow, beautiful. And a mandatory military training program for acquiring citizenship could be devised in such a way as to inspire humility among trainees towards that history—an awareness of just what it is that nationhood truly represents, in all its beauty, savagery, and awe-inspiring glory and horror. 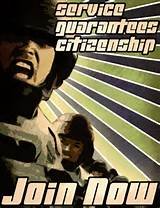