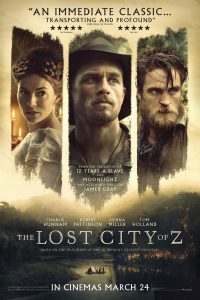 [1]The Lost City of Z is based on a recent book of the same name by David Grann about the British explorer Percy Fawcett’s quest for a legendary ancient lost city in the Amazon rainforest. Its premise brings to mind epic films like Lawrence of Arabia or Apocalypse Now (indeed several scenes are uncannily reminiscent of Coppola). However ultimately The Lost City of Z lacks the grandeur of the former and the hallucinatory intensity of the latter. It is also burdened by the clutter of several secondary themes (romance/family, war, colonialism/racism, classism, sexism) and the ham-fisted insertion of modern liberal talking points into the plot.

Fawcett went on multiple expeditions to the Amazon region from 1906 to 1925. His first was a cartographic expedition to survey the border between Brazil and Bolivia. By around 1914, Fawcett had become convinced after unearthing a document in the National Library of Rio de Janeiro written by an eighteenth-century Portuguese settler that the lost ruins of an ancient city lay hidden within the Amazon rainforest unknown to Europeans. The pursuit of this city became the defining purpose of his life and his great obsession. Delayed at first by WWI (in which he served with distinction), in 1920 he set off on an archaeological expedition to the Mato Grosso region with the aim of finding “Z.” This initial attempt failed, but he returned again in 1925 with his son Jack and a friend. They were never seen again, and their disappearance has been the source of much speculation. According to Grann they were killed at the hands of a hostile native tribe before they could ever find “Z.” The film notes at the end that traces of an advanced civilization have since been detected around roughly the same area where Fawcett explored, perhaps a reference to the findings of American anthropologist Michael Heckenberger, who discovered a site along the upper Xingu River revealing evidence of irrigation, fortifications, roads, and canals.

The film’s setting could not be further from the scruffy New York neighborhoods where most of James Gray’s works take place. His first film, Little Odessa, revolves around Jewish immigrant life in Brooklyn. The only common thread is that both The Lost City of Z and his other films address issues like xenophobia, racism, classism, etc. Gray, who is Jewish, states in an interview: “The thing that drove me to be interested in the film in a major way was this idea that all of us are subject to some perpetrators of a certain order. And that’s a scary concept. People can be victims of class, gender, ethnicity. We as people have a really bad quality, which is to shove each other into different categories and to look down on other people . . .”

Fawcett as played by Charlie Hunnam is courageous and heroic, both in the rainforest as a white man exploring uncharted lands and on the battlefield fighting in the Battle of the Somme. Hunnam’s performance is one of the film’s redeeming aspects. However this also allows Gray to “shape the narrative” (to borrow trendy leftist lingo) from the inside.

Thus the film contains a number of gratuitous condemnations of bigotry, most of which are clumsily shoehorned into the dialogue. The first of these occurs only a few minutes in when Fawcett’s wife Nina complains about wearing a corset. Later in the film, she attempts to convince him to take her on his expedition, despite having shown zero military or survival expertise and having young children to take care of. Despite the blatant insanity of this, the audience is meant to sympathize with her. Fawcett shuts down her proposal (the film sets out to be a mostly-accurate biopic and having her join would have excessively deviated from reality); when he asserts that the greatest explorers have been male for a reason, she scolds him for his backward thinking. This scene really served no purpose plotwise.

Another such incident occurs at an early meeting of the Royal Geographical Society when Fawcett attempts to convince the others of the merits of an archaeological expedition to the Amazon region as opposed to merely a cartographic expedition. Some haughty toffs sniff that there would be nothing to find there because savages are incapable of cultivating civilization. One of them voices the fear that discovering a great civilization would destroy notions of European superiority. This scene was clearly meant to ridicule racist old white men, but these remarks merely came off as bizarre. Europeans have long been fascinated with ancient far-off civilizations while still maintaining pride in European civilization. Among the traits that set Europeans apart from other groups are a genuine curiosity about foreign cultures and the “Faustian” impulse to explore foreign lands. This is fully compatible with patriotism and nationalism. Furthermore, no explorer ever shrank from an expedition because he feared that stumbling across something great would damage his ego.

There is a similar scene later on, this time taking place in a courtroom. Fawcett opines that the jungle of Amazon may “contain a hidden civilization that may well predate our own” and the raucous mob respond with exaggerated “boos.” After an audience member protests that savages are not “our equals,” Fawcett presents some shards of pottery and is mocked by the audience in response. In a move pandering to the egos of white liberals, he is portrayed as a lone morally righteous white progressive standing above the white racist rabble. But in reality Fawcett was not the anti-racist hero that he is here. He saw the natives merely as a means to an end and was more interested in the ruins of their civilization than in the natives themselves. He described them as “hideous ape men with pig-like eyes” and also theorized that the civilization he sought must have been the creation of a lost European tribe.

Overall Gray’s languid and muted style fails to evoke the single-minded obsession that instinctively impelled Fawcett to leave his family and risk his life several times in the depths of the Amazon rainforest even the face of repeated failure. In part this is because the film’s modern moralizing about how “we’re all made from the same clay” creates a layer of distance that prevents it from fully capturing the almost uniquely European drive to explore and discover. Another reason for this could be the near-complete omission of Fawcett’s interest in Theosophy and the occult (minus a brief glimpse of an ouija board). Fawcett envisioned his quest as one of cosmic proportions that he was divinely destined to carry out. He considered “Z” to be the birthplace of extraterrestrial deities and spoke of discovering the lost history of Atlantis. This would have added another dimension to the film but was omitted entirely. Despite the film’s fascinating premise, it ultimately falls short of greatness.