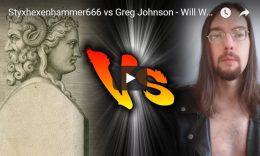 [1]It was such a delight to listen to Greg Johnson debate [2] Styxhexenhammer666 (AKA Styx) earlier this week. Both principals brought to the table a comprehensive arsenal of facts and arguments with which to support each side and produced some fine intellectual jousting. The debate resulted in a lot of light and thankfully very little heat.

The topic was nominally ethno-nationalism vs. civic nationalism, but in the end amounted to a version of the statism vs. libertarianism debate which in its current form is at least as old as the Enlightenment. This made it fun for me. Although I am not a libertarian myself, there is still a libertarian kernel in my mind which influences my thinking. Further, I do appreciate libertarian-type folks like Styx who are well-informed, civil, and, most importantly, willing to entertain arguments and ideas not their own. This stands in sharp contrast to a previous debate [3] in which YouTuber and famous skeptic Sargon of Akkad could not stop hectoring Richard Spencer whenever he challenged Spencer to describe or defend the idea of a white ethnostate. What could have been a lively debate often descended into a cacophonous caterwaul. Just about the only times the debate became worthwhile was when Styx and Spencer exchanged arguments without the thin-skinned Sargon butting in.

Although not being opposed to race-realism or ethno-nationalism per se, Styx’s twofold objection to it amounted to:

The men debated for over two hours, and so there was a lot more going on than this. However, I think this does encapsulate Styx’s main objections without too much characterization. With the same caveat, I would describe Johnson’s main positions, vis-à-vis these two objections as:

One can read any of Johnson’s essays on White Genocide [4] or his “Slow Cleanse” [5] article to get a better feel for his positions.

Although I’m not exactly a disinterested observer here, I don’t think that Styx provided convincing responses to Johnson’s main arguments. After Johnson brought up the possibility of White Genocide, Styx recounted how throughout history whites have had a similar sense of impending doom and yet somehow found the strength and will to survive. He offered the Muslim threat to Europe during the Middle Ages as an example and reminded us of how whites were able to repel it and thrive. Of course, he neglected to realize that adopting the fierce anti-Muslim attitude necessary for purging the Turk and reconquering places like Spain and the Balkans greatly resembles the pro-white absolutism Johnson prescribes for attaining an ethnostate today. The reasons for both are similar as well. In Styx’s mind, carving a white ethnostate out of Moorish territory in the Iberian peninsula over 500 years ago through warfare and massive bloodshed was okay, but doing something similar in America or Europe today while promising significantly less bloodshed is not okay.

Styx’s attitude resembles what I would call ‘historical complacency.’ Historically complacent people may be well versed in history but they take for granted the tangible sacrifices people have made throughout history and instead use history to connect only those dots which support a particular ideology. I am sure we all do this to some extent, but we should still aspire to do as little of it as possible since it is at best irresponsible and at worst dishonest. To demonstrate my point, Styx opposes transitioning to an ethnostate today because the very act of transition he thinks will lead to abuse. Okay, fine. However if we transport Styx back to fifteenth-century New Castile and apply this same logic, he would necessarily be opposed to the Reconquista for the exact same reason: abuse. I am sure in 1492 some poor Muslims were abused and had their human rights stripped away when the Spaniards were expelling the last of their kind from Grenada. Yet, to quell Johnson’s concerns about White Genocide, he then points to events like the Reconquista as good things. Styx offers such events as evidence against the idea that white people will go gently into that good night.

Well, as any logician will tell you, A cannot equal Not A. Styx cannot have it both ways. Either he supports the Reconquista or he doesn’t. Either he supports transitioning to a white ethnostate today or he doesn’t. Due to his historical complacency, he tries to get the best of both worlds. Because the abuse which took place during the Reconquista happened so long ago, he doesn’t see it or feel it. Therefore, it’s okay. However, forcing non-whites to leave historically white nations today could lead to abuse which he can see and feel and therefore is not okay.

I believe such a contradiction strikes a fatal blow to Styx’s position because it leaves him facing the following Hobson’s choice: Either admit he has no sufficient rejoinder to Johnson’s first point (a white ethnostate is needed to prevent White Genocide) or violate his own second point (the threat of abuse outweighs need for transitioning to an ethnostate).

Another point I would like to make which neither principal caught during the debate addresses Styx’s notion of abuse. It seems to him that abuse is something only the state can inflict on people. Every time Johnson (or, earlier, Spencer) brought up ways an ethnostate transition can actually happen, Styx always presented the worst possible scenario as being the most probable. In response to Johnson’s ‘Slow Cleanse’ idea, Styx proposed that non-whites and their white allies would take up arms against white identitarians. What then? In Styx’s mind, any transition to a white ethnostate would devolve into warfare and ultimately tyrannical oppression. While Styx’s point has historical precedent and should not be dismissed outright, he fails to consider that tyranny doesn’t always go from the top down. Sometimes it can go from the bottom up. Multiracialism provides an excellent example of this because when forced in close proximity to most non-whites (blacks, Hispanics, and Arabs, mostly), whites often have no choice but to flee lest they witness their hometowns devolve into depressed barrios, third world ghettos, or modern caliphates—not to mention be victims of violent crimes or oppression themselves. This is ethnic cleansing and it has been happening in America at least since World War II. I will note that it has nothing to do with the left-wing “bullshit” Styx constantly complains about. Instead, it is merely a result of people on different points of the evolutionary timeline acting according to their racial natures. But because in this scenario non-whites benefit at the direct expense of whites who for the most part do not wish to be ethnically cleansed, how is this not tyranny? Such ethnic cleansing may have occurred with minimal bloodshed, but how is it not abuse of the rights of white people? If Styx is so concerned about the abuse which may happen when a white nation becomes more white, why is he then not so concerned about the abuse which has already happened when white nations became less white?

Again, he can’t have it both ways. Also, if he recognizes this contradiction, he must then also recognize the possibility that ethnic cleansing, while abusive, can result in little bloodshed. If whites were able to uproot themselves and establish lives elsewhere, then so can the non-whites. That’s why we have planes, trains, and automobiles. Whites can establish a homeland on the continent for blacks. Whites can encourage most Asians and Jews to live their lives and make their fortunes outside their borders. And whites can entice Hispanics to go back to where they came from.

This will not necessarily result in the kind of abuse Styx fears.

And if the non-whites take up arms, as Styx suggests, what then? Well, consider that by taking up arms against a white ethnostate, these non-whites would be rejecting the white right to ethno-nationalism while tacitly accepting their own. After all, no Chinese, Bangladeshi, or Mexican being displaced in North America would volunteer ceding thousands or millions of square miles of their homelands to make room for white people, would they? Of course not. For these people, ethno-nationalism is sacrosanct for me but not for thee. So, given this manifest imbalance, how can Styx or anyone else claim justice for non-whites who initiate armed insurrection against white ethno-nationalism? And if there is indeed no justice in such an insurrection, will Styx then be forced to admit that putting it down forcefully would be just and would be worth all the abuse?

My last point and conclusion involves Styx’s general attitude towards white people. As someone with a libertarian perspective, Styx has a reasonable fear of centralized power. This was evident when he seemed more comfortable with localized vigilante justice being applied to odious criminals like the Rotherdam grooming gangs than with Johnson’s proposition of a state-sponsored police crackdown. For him, localized vigilante justice may be sloppy, but at least there would be no threat of top-down tyranny. Indeed, one of his strongest objections to the white ethnostate was proposing that if white identitarians today can expunge people by their race, then what is to stop them from doing the same along ethnic lines in the future? Today Mexicans get the boot, and tomorrow it will be the Italians or the Irish. What then?

This is a valid concern. My response however is that it would not be in the nature of whites to do that, even the highfalutin Aryan or WASPy ones. I know this because there is a historic precedent. Millions of Italians and Irish immigrated to America between the 1880s and 1920s and, while there was some strife and bellyaching on both sides, the populations assimilated well enough. White high society had their chance to evict their swarthy, drunken brethren and chose not to, largely because their swarthy, drunken brethren were neither as swarthy nor as drunken as they seemed. Instead, they were white like them. The groups had more in common than not. And as a result everything was all right.

Unlike my previous two points, I cannot prove any of this. This comes from a simple faith in the white race and the greatness of the civilization it has created, especially in America for nearly the last 250 years. Since the time of the ancient Greeks, whites have been on the cutting edge of political thought because, of all races, they were and still are the ones most concerned with notions of justice and liberty. To quote Sir Francis Younghusband, a British military leader during the era of the Raj:

Such moral strength can be seen in the dialogues of Plato and the treatises of Aristotle. It can be seen in Justinian’s Digest of Roman Law and in The Magna Carta. It can be seen in Thomas More’s Utopia and in The Prince and The Discourses by Machiavelli. It can be seen in The English Bill of Rights and the US Constitution. I can give scores of examples leading up to modern times with Aleksandr Solzhenitsyn’s Gulag Archipelago and Samuel Huntington’s Clash of Civilizations. My feeling is that in transitioning to an ethnostate, American whites will make it their job to protect the most rights for the most people as possible. I would feel this way especially if inherently moral white men like Styx were in charge of it. Even at their worst, as slaveholders of blacks or as conquerors of indigenous tribes, American whites sill behaved with more justice and care than other races placed in similar circumstances. After a careful look at history and current events, this cannot be denied. So when Styx frets about potential abuses from the government of an American white ethnostate, I just want to pat him on the shoulder and, with the greatest respect, say, “It will be all right.”