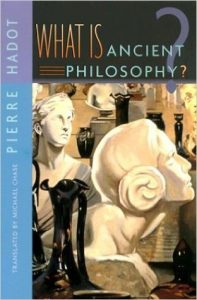 In his Seventh Letter, Plato states that if one does not adopt this [philosophical] way of life, then life is not worth living, and that is why one must immediately decide to follow this “path,” this “marvelous path.” This way of life incidentally requires a considerable effort, which must be renewed each day. It is this way of life which distinguishes between those who “really philosophize” and those who “do not really philosophize,” the latter having only an external varnish of superficial opinions.[1] [2] Plato alludes to this way of life[2] [3] when he mentions his disciple, Dion of Syracuse. It consists in “loving virtue more than pleasure,” in turning away from the pleasures of the senses, in following a certain diet, in “making [one’s] daily life such as to give [one] the greatest possible mastery over [oneself].” As P. Rabbow has shown well,[3] [4] it indeed seems that certain spiritual practices, the trace of which can be found in several passages in the dialogues, were current in the Academy.

In the last pages of his dialogue the Timaeus, Plato asserts that it is necessary to exert the higher part of the soul, which is none other than the intellect, in such a way that it harmonizes with the universe and becomes one with the divine. But he does not give any details on the way to practice these exercises. It is in other dialogues that we can find interesting details.

One can speak of a “preparation for sleep” when Plato talks about the unconscious drives [pulsions] revealed by dreams, for example these “beastly and savage” desires for rape and murder which are within us.[4] [5] To not have such dreams, one must ready oneself in the evening by trying to wake up the reasonable part of the soul through inner dialogues and investigations on elevated subjects, by practicing meditation, and by thus calming desire and anger. We will also note that Plato  recommended little sleep: “a man . . . sets aside for sleep only as much time as is necessary for his health – and that is only a little, once that little has become a regular habit.”[5] [6]

Another exercises consists in maintaining one’s calm in misfortune, without complaining,[6] [7] using for this maxims capable of changing our inner dispositions. We will tell ourselves that we do not what is good and what is bad in these sorts of unfortunate events, that becoming indignant is useless, that no human thing deserves to have much importance attached to it, and that, as in a game of dice, one must take into account things as they are and act in consequence.[7] [8]

The most famous practice is the death-exercise, which Plato mentions in the Phaedo, which precisely gives an account of the death of Socrates. Socrates states that a man who has spent his life in philosophy necessarily has the courage to die, because philosophy is nothing else than a death-exercise.[8] [9] And it is a a death-exercise because death is the separation of the soul and of the body, and philosophy seeks to separate one’s soul from one’s body. The body indeed brings us a thousand troubles, because of the passions it causes and the needs which it imposes upon us. The philosopher must then purify himself, that is to say, try to concentrate and bring together his soul, to free it from the dispersion and distraction imposed by the body. One thinks here of Socrates’ long meditations on himself mentions in the Symposium, during which he stays still, without moving or eating. This exercise is inevitably an askesis of body and thought, a stripping away of passions to reach the purity of intelligence. Dialogue is, in a sense, already a death-exercise. For as R. Schaerer said: “individual embodiment ceases to exist from the moment which it is externalized in logos.”[9] [10] This was one of the favorite themes of the dearly departed B. Parain: “Language only grows out of the death of individuals.”[10] [11] According to the story of Socrates’ death which is the Phaedo, one thus sees that the “I” which must sublimate itself into an “I” foreign to death, because it has identified itself with logos and thought. That is what Socrates makes clear at the end of the dialogue: “I am failing to convince Crito that I am this Socrates talking to you here and ordering all I saw, but he thinks that I am the thing which he will soon be looking at as a corpse.”[11] [12]

If in the Phaedo this exercise is presented as a death-exercise, which precisely frees the soul from the fear of death, in the Republic it appears as a sort of flight of the soul or a view from above on reality: “pettiness is altogether incompatible with a soul that is always reaching out to grasp everything both divine and human as a whole. . . . Then [he will not] consider death to be a terrible thing.”[12] [13]

Here again the exercise consists in radically changing one’s point of view and in embracing the entirety of reality in a universal vision, which allows one to overcome the fear of death. Greatness of soul will thus reveal itself to be the fruit of thought’s universality. The philosopher described in the Theaetetus has the same view from above upon earthly things.[13] [14] His thought flies everywhere, among the stars and on earth. That is incidentally why Plato describes him with humor, as a stranger lost in the human, too human world, and running the risk of falling into a well, as the wise Thales did. He is indifferent to the struggle for offices, political debates, and the feasts accompanied by flute-girls. He does not know how to argue in the courts, nor how to insult, nor how to flatter. The grandest of properties seem to him to be little, “used as he is to envisaging the whole earth.” He is indifferent to the nobility supposedly guaranteed by long genealogies. As P. Rabbow saw well, there is here no distinction here between contemplative life and active life, but an opposition between two ways of life, the philosophical way of life, which consists in “becoming just and holy in the clarity of intelligence,”[14] [15] which is therefore at once a science and a virtue, and way of life of non-philosophers; the latter are at ease in the perverted city only because they content themselves with the appearance of skill and wisdom, which ends only in brutal force. The Theaetetus implies that if the philosopher seems like a ridiculous stranger in the city, this is only in the eyes of the common man, which the city has corrupted, and recognize as values only cunning, skill, and brutality.[15] [16]

To a certain extent, the ethic of dialogue, which is, for Plato, the spiritual exercise par excellence, is linked to another fundamental procedure, the sublimation of love. According to the myth of the preexistence of souls, the soul has seen, when it had not yet descended into the body, the Forms, the transcendental Norms. Fallen into the sensible world, it has forgotten them, it can no longer even intuitively recognize them in images of the sensible world. But only the Form of Beauty has the privilege of still appearing these images of itself which are beautiful bodies. The loving emotion which the soul feels before such a beautiful body is provoked by the unconscious remembering of the  vision of beauty which the soul had witnessed in its previous existence.[16] [17] When the soul feels the humblest earthly love, it is this transcendental beauty which is attracting it. Here we find again the state of the philosopher discussed in the Symposium, the state of strangeness, of contradiction, of inner imbalance, because he who loves is torn between his desire to unite carnally with the beloved object and his drive towards the transcendental beauty which is attracting him towards the beloved object. The philosopher will then try to sublimate his love, by looking to improve the object of his love.[17] [18] His love, as it is said in the Symposium,[18] [19] will give him spiritual fecundity which will manifest itself in the practice of philosophical discourse. We can detect here in Plato the presence of an element not reducible to discursive rationality, which is inherited from Socratism, of the educational power of the presence of love: “One learns only from whom one loves.”[19] [20]

We said above that science, in Plato, is never purely theoretical: it is a transformation of one’s being, it is virtue, we can now say that it is also affectivity. One could Whitehead’s expression to Plato: “Ideas are always bearers of emotion.”[21] [22] Science, even geometry, is a knowledge which engages the entire soul, which is always bound to Eros, to desire, to striving, and to choice. “The idea of pure knowledge, that is to say pure understanding,” says Whitehead, “is completely foreign to Plato’s thought. The age of professors had not yet arrived.”[22] [23]