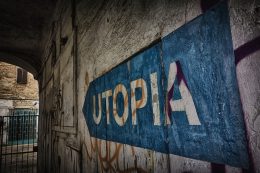 Utopianism is one of the most common objections leveled against White Nationalism, even from people who largely agree with us.

The word “utopia” literally means “nowhere” and refers to an ideal form of government that is not actually found anywhere in the world and may be impossible to realize. For the vast majority of persuadable whites, utopianism flatly disqualifies any political ideology, and the tiny minority that finds grandiose and impossible-sounding utopian visions appealing are overwhelmingly Leftists, the vast majority of them implacable enemies of white self-determination. Thus to own the label “utopian” is self-defeating in the extreme.

Fortunately, there is no need to paint ourselves into the utopian corner, because the ethnostate is no mere abstraction. De facto ethnostates exist on the planet today: Poland and Japan, for instance, are overwhelmingly racially and ethnically homogeneous, and although neither makes ethnicity the explicit legal foundation of citizenship, they consistently reject proposals to open their borders to mass immigration. Tiny Estonia, although afflicted with a large foreign population descended from Russian colonists, is a de jure ethnostate, for its constitution explicitly claims that the primary aim of the Estonian state is the preservation of the Estonian people for all time.

Within the United States, we know exactly what a homogeneously white society would look and feel like, because there are countless zip codes in which there are no non-whites at all, or such tiny numbers that they do not alter the norms and functioning of white society. These communities include many of the suburbs and resorts favored by our anti-white elites. These “whitopias” are quite real, and they are routinely ranked among America’s best places to live [3]. The goal of White Nationalism is Aspen, or Chappaqua, or Martha’s Vineyard for everyone.

Moreover, within the lifetimes of many present-day Americans, the kinds of laws and policies proposed by White Nationalists actually existed, from immigration laws designed to preserve the white majority, anti-miscegenation laws to maintain racial purity, eugenics laws to improve future generations, and even mass deportations of Mexican invaders from border states. These are not utopian pipe dreams. They have already happened.

Thus the first step to creating a White Nationalist America is to dust off these laws and policies and implement them once again. America could become a normatively white society again tomorrow. That is simply a matter of will. And once that decision is in place, we can adopt and improve upon tried and true policies to move from multiculturalism toward the white ethnostate. This process might take fifty years. But we could take our time to get it right, because whites would begin to reap enormous psychological benefits today, simply by knowing that our people have a future again. The purpose of White Nationalism is to give our race a future again, in North America and around the globe.

The ethnostate is no utopia. We know that ethnostates are possible, because they are actual. The real utopia is the multicultural, multiracial paradise where diversity is a source of strength, not alienation, inefficiency, hatred, and violence. Pursuing the multicultural utopia is making vast parts of the white world into dystopias. Compared to multiculturalism, White Nationalism is sober, plodding political realism.

So if the ethnostate is a real possibility, aren’t White Nationalists obligated to spell out exactly what kind of society it will be? Will it be capitalist or socialist? Will it be democratic or authoritarian? Will the legislature have one house or two? What will the flag look like?

Many White Nationalists are dismissive of such questions, and for good reasons.

First, such questions seem premature. It may be generations before we have white ethnostates in North America, and the task of designing institutions and flags will fall to future generations. It seems hubristic to try to make decisions for them.

Second, it is naive to think that there is one right answer to this question. A glance at history reveals an astonishing variety of different political regimes in white societies. Different white peoples find different forms of government attractive. A Scandinavian ethnostate might be much more socialistic than an American one, but they could be equally committed to the survival and flourishing of their citizens.

Fourth, such questions put too much faith in institutions and laws, and not enough faith in our people. Whites have a way of making decent societies, no matter what political and economic systems they adopt. Conversely, as the history of post-colonial Africa proves in spades, even the wisest constitutions cannot produce good government if the people are not capable of it. Thus the most important thing is for white nations to regain control of their demographics and their destinies. At that point, we can simply trust the white genius for self-government to come up with a whole range of workable political models.

As convincing as these arguments are, though, White Nationalists still have to offer some specifics. White Nationalism will never happen unless we can rally as many whites a possible to our cause. But if we offer no concrete proposals, we are in effect asking our people to give us a blank check, and most of them will quite understandably balk at that prospect.

White Nationalists need to adopt the following policies to turn the United States into an ethnostate.

First, we need to close our borders to non-white immigrants.

Second, we must repatriate all post-1965 immigrants and their descendants to their ancestral homelands.

Third, we must deal with pre-1965 non-white populations by offering them, for instance, autonomous reservations, independent ethnostates, or resettlement in their ancestral homelands.

Fourth, we must institute anti-miscegenation laws to protect the purity of our race. The best anti-miscegenation policy, of course, is simply creating a white homeland. But since it is impossible to prevent all inter-racial contact — due to tourism and trade, for instance — actual laws need to be put in place to discourage miscegenation.

Fifth, an ethnostate must institute pro-family policies. We must restore biologically-based and tradition-hallowed sex roles: men as protectors and providers, women as mothers and community builders. We must also make it affordable for men of all social classes and income levels to own homes and support housewives and children.

Sixth, we will have to adopt protectionism and pro-labor policies to promote the return of high-wage manufacturing jobs to America.

Seventh, we will have to reform our educational system, culture, and media to purge them of anti-white propaganda and communicate the knowledge, skills, and virtues necessary both to flourish as individuals and perpetuate our civilization.

This much is obvious. What people want to know is just how far this collectivism and anti-liberalism will go.

The political mainstream, particularly in the United States, is divided between the Left, which has no trouble using government to promote anti-white policies, and the Right, which tends toward a naive distrust of government as such and a naive faith that social order can spontaneously emerge from the bottom up.

The best response to this sort of straw man argument is to point out that all of the policies we advocate actually existed, to one extent or another, in the United States within the last century, when the country was far freer and happier than under the present, politically-correct multicultural system.

Again, White Nationalism is no mere abstract possibility. Everything we advocate has already been tried. We know what we want is possible because it has already been actual. The burden of proof is on the advocates of multiculturalism, which has never improved any society anywhere, to prove that their vision will lead to anything but hell on earth for white people.