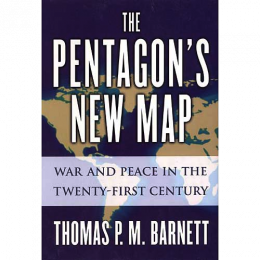 There has never been intellectual output from the America’s political establishment quite as ill-conceived as what we experienced between September 12, 2001, and March 20, 2003; the period between the 9/11 attacks and the start of the Iraq War. To put it simply, at that time the political elite launched the “invade the world, invite the world” public policy and pushed very hard for “regime change” in Iraq. It all went very badly. During that time a Warfare Analyst at the US Naval War College, Thomas P.M. Barnett, put forward a concept that neatly meshed with the bad ideas from those days. Both the bad ideas of the era and the good ideas of Barnett should be explored.

Barnett’s concept is described in his book The Pentagon’s New Map. According to Barnett,  the world is divided into two different areas. The first is the Functioning Core. These nations have integrated trade relationships and operate under a set of known rules. This set of rules allows for conflicts to be resolved without warfare. The second part of the world is the Non-Integrated Gap. The nations of The Gap are characterized by unstable leadership, civil strife and insurrection, terrorism, poverty, and other problems. 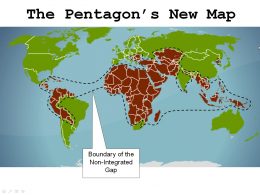 [2]Barnett argues that the most important export of the United States is security. To put it simply, security means American troops deploying abroad to various hotspots in The Gap to turn The Gap countries around and integrate them into The Core. Much of his reasoning is based on his idea that Germany and Japan were once Gap nations which were integrated into The Core after their defeat and reconstruction during and after World War II. (Which in my eyes is a false premise.)

According to Barnett, it is essential to “globalization” and The Functioning Core to allow five flows. The book originally has four flows but Barnett has since added one. The flows are:

To make this work, according to Barnett, the US Policy must contain two forces. The first is “The Leviathan.” Basically, this is the US Military. It is well-armed, aggressive, and staffed with young men. The second force is “SysAdmin.” It is staffed with older men and experienced intellectuals. To put it in a personal context, “The Leviathan” is represented by Major T. E. Lawrence (of Arabia). “SysAdmin” is represented by Sir Mark Sykes and Lord Balfour, two of the men who organized the British Empire in the Middle East after WWI.

Professor Barnett’s ideas were heavily promoted by the Defense Department and through the mainstream media during the lead up to the Iraq War. The book is, in fact, a bigger version of an article[1] [3] published in Esquire magazine in March 2003 – the same exact month the invasion of Iraq began. The Pentagon’s New Map should thus be seen as war propaganda masquerading as intellectualism.

The Problems with the Pentagon’s New Map

Barnett rejects the ideas of the Samuel Huntington in The Clash of Civilizations for his bifurcated view of the world. The concept is bold, but risky and wrong. However from here on out, this article will discuss Barnett’s ideas using his own terms.

1. Seeing Faces in the Clouds

By putting a different template to the above facts, Barnett is simply imagining he sees real faces in the clouds.

2. Faces in the Clouds II

In the decade since The Pentagon’s New Map has been published, we see that organized Jewry has dropped any concern for integrating the economies of The Gap with the Functioning Core and is pushing for conflicts with nations that are either in Barnett’s Core or could be.

Barnett probably misses the above because he is a “color-blind” liberal and late-arriving Baby Boomer. All institutions or people that genuinely believe in racial integration misread the data, and Baby Boomers seem to be the biggest believers. Barnett fails to grasp the fact that the Functioning Core consists of areas where either whites predominate, have a big influence (South Korea and Japan), or where the population is high IQ, (Northeast Asia). The Gap consists of nations that are predominantly black, Amerindian/Mestizo, following Islam, or low-IQ/Low Trust Orientals (Cambodia, Burma, etc.). Areas of the Functioning Core which are mostly non-white, such as the Paris suburbs or Detroit are really parts of The Gap.

Barnett doesn’t seem to recognize that American deployments to Haiti have never turned around that extension of Africa in the Western Hemisphere. Rule-sets also don’t work across racial lines. Liberia uses a constitution based on the American one, but that nation is a failed state. The Declaration of the Rights of Man were taught throughout France’s colonies in Central Africa, but that didn’t stop a thriving culture of cannibalism.[2] [4] Indeed all investments in low-IQ nonwhites turn to ash. The push to get non-whites mortgages in the United States in 2003 blew up the global economy.

In one video,[3] [5] Barnett recognizes that mestizos have been migrating into the United States. He laughs off concerns related to this and then clouds the subject to one of changes to the American Flag meshed with corporate buzzwords. Some better questions to ask regarding Latin American immigration are:

American Successes Are Often Due to Luck

Much of Barnett’s thinking seems to be influenced by the Stephen Ambrose version of World War II. This is the narrative whereby Americans were plastic demigods that brought peace and light wherever they went. With this view, one can genuinely believe that American bombers created the post-war miracles of economic prosperity in West Germany and Japan. However, this idea is probably wrong. It might be that US policy worked in those nations due to luck or some other factor we don’t really understand. There are a great many American interventions that go nowhere. Haiti, the Banana Republic Wars, Iraq, and Vietnam were either foul-ups that cost a great deal of blood and treasure, or deployments that provided no upside.

American interventions are also not really part of a “global” system of goodwill, rule-sets, and expanding economic opportunities. America is part of the very aggressive Anglo-Saxon world which sets up trading networks, empires, and other systems for its own needs. This system and great culture are not appreciated by those closest to it. France, Ireland, Cuba, Panama, Transvaal, Quebec, and Mexico all have anti-Anglo sentiments that are expressed in ways ranging from Joan of Arc to undrinkable tap water.

Most Threats to Americans are Imaginary

American military policy is set by non-American pressure groups such as Jews or other foreign lobbyists. The threats might be real to the DC-based lobbyists from the far-off tribe of whomever, but they are imaginary to any American. Consider the following statements that were swallowed at the time but became ridiculous looking back upon them. They will be quoted below with no further comment:

The world is too small to provide adequate ‘living room’ for both Hitler and God. In proof of that, the Nazis have now announced their plan for enforcing their new German, pagan religion all over the world—a plan by which the Holy Bible and the Cross of Mercy would be displaced by Mein Kampf and the swastika and the naked sword. — Franklin Delano Roosevelt[4] [6]

…loss of Vietnam would compel the United States to fight ‘on the beaches of Waikiki’ and eventually on ‘our own shores.’ — Lyndon Baines Johnson[5] [7]

So, why are we [in Beirut, Lebanon]? Well, the answer is straightforward: to help bring peace to Lebanon and stability to the vital Middle East. — Ronald Reagan [6] [8]

Iraq is a long way from [America], but what happens there matters a great deal here. For the risk that the leaders of a rogue state will use nuclear, chemical or biological weapons against us or our allies is the greatest security threat we face. And it is a threat against which we must and will stand firm. In discussing Iraq, we begin by knowing that Saddam Hussein, unlike any other leader, has used weapons of mass destruction even against his own people. — Madeline Albright (Jewish)[7] [9]

In Barnett’s 2004 book, he argues that America’s military policy is paid for when the Chinese and other nations invest their surplus from the trade imbalance in US Treasury Bonds. Unfortunately, Treasury bonds are not the sort of transactions where money is exchanged for goods and services. They represent debt that must be repaid. Americans must pay Chinese merchants back with interest to secure the shipping routes the Chinese need to sell their geegaws at Walmart. It is now clear that this has been a disaster. The Chinese once were underemployed and hooked on opium, today that situation applies to the Americans.

Free Flow of Food and Security, is a Questionable Goal

Professor Barnett’s concepts that capital and energy should be free-flowing are probably correct. The financial system, like human society itself, is a thing of infinite complexity and outside of limited reforms such as the Glass–Steagall Act, most Big Ideas – like Communism or Napoleon’s Blocus continental – end up being big failures. Furthermore, for many nations, oil is the only thing they’ve got. Saudi Arabia must sell oil to live.

However, the free flow of food, security, and people needs a second look. It sounds good, but food production does incur operating expenses. If someone wants to eat, they must pay for it. Famine in far-off places is part of the warp and weft of life.

Security is also another factor that must be given a second look. American alliances are often one-sided subsidies to one party that provides no help to an American against another party that does harm to an American. Securing Israel and South Korea against their enemies are perfect examples of this phenomenon. Another example is the NATO commitments east of the Vistula River.

The Free Flow of People is the Only Real Threat

The free flow of people works when they are Europeans, but even then that is a risk to the domestic harmony of the receiving nation. Unfortunately, due to the explosive growth in the Third World, the wrong people are now the ones free flowing. Additionally, Barnett mistakes the cause of the problems in The Gap. Security provided or not provided by “The Leviathan” is irrelevant. The Gap’s problems are a manifestation of the society that The Gap people produce. Due to the free flow of people, entire neighborhoods in The Core are becoming enclaves of The Gap.

The biggest real threat to any member of The Core is the free flow of Gap people into the Core. To emphasize this idea, recognize that a million Somalis starving is 0% a real problem to any Swede. Unfortunately, a Somali, well-fed and in Sweden based on a humanitarian policy of free-flowing migration of people, who suddenly becomes a  Jihadi and carries out a truck attack in an upscale Stockholm shopping district, becomes a 100% real problem to a great many Swedes.

Free flow between nations in The Core is also problematic. While there is much praise for Asian “high IQ” and the rise of China, it is important to note that China has a cyclical history of prosperity and stability (i.e. Marco Polo’s description of China) and then collapse and civil unrest (i.e. the China of Pearl S. Buck). Furthermore, one group of people in The Core can easily squeeze out the elites of another group in The Core.

While Barnett’s ideas are mostly bad, there are some important truths. His ideas about rule-sets and his idea about The Core vs. The Gap are interesting. Ultimately the way to reduce The Gap and expand The Core is to reverse the demographic trends and the flow of migrants. Get whites producing children and get them moving into the areas of The Gap. A white ethnostate in Haiti would indeed be a tropical paradise.