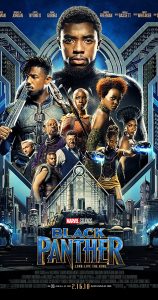 I saw Black Panther with a friend in Seattle last week. Judging from the reverent silence in the theater — broken only occasionally by our laughter at unintentional bits of humor — it was an all-white audience. The serious tone of Black Panther is a departure from recent Marvel movies, which constantly undercut heroism with ironic humor. But Black Panther is a movie about numinous, magical Negroes, and some things are sacred. God is not mocked. (Unless he is Thor.)

Given the massive media hype and grotesque, fawning patronage of white liberals, I was prepared to hate Black Panther. But it really isn’t a terrible movie, although I would not see it again.

The premise of Black Panther is ludicrous, but no sillier than most superhero movies. The superhero known as Black Panther is the hereditary monarch of a remote African kingdom called Wakanda. Wakanda, like Ethiopia, Lesotho, and Swaziland, was not colonized by whites. Wakanda also possesses a unique natural resource, a magical metal of extraterrestrial origin called “vibranium.” (One has to ask: when Stan Lee and Jack Kirby created the Black Panther character in 1966, was “vibrant” already a euphemism for non-white?) Because of their isolation and vibranium, Wakanda developed the most advanced technology on the planet. To protect themselves from white colonizers, the Wakandans used this technology to hide their futuristic capital city — complete with flying cars — behind some sort of ray shield, like an African Galt’s Gulch.

Black Panther is a deeply feminist film, even though feminism is as common in the real Africa as flying cars. Sometimes the costumes and set design look like they could have come from the pen of A. Wyatt Mann, especially the guy with the green zoot suit and matching lip plate. There is a hilarious scene in which some Wakandans shut up a white man by oogaing. (I pray that this catches on [2].) When a Wakandan flying car shows up in Oakland, the local urban youths immediately start talking about stripping it and selling the parts. Naturally, the white liberals around me were terrified to laugh at any of this.

But at a certain point, I simply decided to view Black Panther as a science fiction movie set a long time ago, in a galaxy far, far away, and this suspension of disbelief allowed me to relax and enjoy the spectacle.

The plot of Black Panther deals with the rise of a new king/Black Panther, T’Challa (played by Chadwick Boseman), who faces two challenges to Wakandan isolationism.

The first challenge is the liberal welfare statism of T’Challa’s ex-girlfriend Nakia (Lupita Nyong’o), a spy who roves around Africa doing good deeds for impoverished and oppressed Africans. She thinks that Wakanda needs to become a humanitarian superpower like Sweden, sending foreign aid and taking in refugees. (Let’s call this option “Dem Programs,” for short.)

The second challenge is represented by T’Challa’s American-raised cousin N’Jadaka/”Killmonger” (Michael B. Jordan), who wishes to spark a global black revolution by exporting Wakandan weapons and technology to black revolutionaries and gangsters around the globe. (We’ll call this option “Kill Whitey,” for short.)

There has been a lot of debate about the politics of Black Panther, most of it wrong-headed.

Wakanda is a black, isolationist ethnostate which cultivates a fierce patriotism. When T’Challa shares Nakia’s suggestion to open Wakanda to refugees with W’Kabi, a tribal leader played by Daniel Kaluuya, the response is simple: Refugees would inevitably bring their problems to Wakanda and destroy their way of life. I was shocked that such sentiments made it to the screen, but the reason soon became clear: W’Kabi is a villain, and Black Panther only voices such Trumpian sentiments to dismiss them.

To repeat: Black Panther is not an ethnonationalist, isolationist movie. To be sure, it shows how such policies created a great society. But the message is that it is selfish for Wakanda to keep its treasures to itself. It must share them with the world, even at the risk of losing its identity and independence.

Furthermore, although Killmonger is an eloquent advocate for the global extermination of white people, Black Panther is not Walt Disney’s Kill Whitey. (There’s a good meme in there, through.) Indeed, Killmonger is the main villain of the movie, and he is defeated and killed by T’Challa, who does not take his cousin’s ideas the least bit seriously. Instead, he regards them as merely a symptom of the malaise of black people under colonial oppression. He even blames his cousin’s downfall on his father’s decision to abandon him in America rather than raise him in Wakanda. This mistake, of course, was rooted in Wakandan isolationism.

Black Panther isn’t even anti-white per se. Yes, the only colonial oppressors mentioned are whites. Nary a word is spoken about the vast Arab slave trade. Yes, one of the principal villains is a white South African with the subtle name Klaue (“claw”) played by Andy Serkis. But one of the heroes of the movie is a white man, Everett K. Ross (Martin Freeman), who is an agent of the CIA no less. Yes, the good white guy works for the American deep state. Let that message to black America sink in for a minute.

So what is the political message of Black Panther, once both isolationist ethnonationalism and global white genocide are rejected? Dem Programs, of course. T’Challa comes to think that Wakanda has been wrong to selfishly guard its independence and hoard its wealth. Thus, at the end of the movie, T’Challa and his sister go to Oakland, California, one of America’s vibrant murder capitals, to outline his plans to uplift blacks around the world with Dem Programs. No doubt with the aid of their good friend in the CIA and other liberal white (((or whitish))) allies. Roll credits.

Black Panther is an entertaining spectacle, but in political terms it is a sinister fraud. It draws its energy by exciting black audiences with two Black Nationalist visions that, like it or not, resonate deeply with them: the advanced, isolationist, nationalist African Shangri-La of Wakanda and Killmonger’s project of global white genocide. But in the end, Black Panther rejects both forms of Black Nationalism and channels these energies into support for the present system of racial integration and liberal-managerial welfare statism under the tutelage of the Democratic Party and the globalist deep state.

Colonialism runs deeper than you think.

But this should come as no surprise, given that the creators of the original Black Panther comic are Jews. Writer Stan Lee was born Stanley Lieber, and artist Jack Kirby was born Jacob Kurtzberg. Moreover, both Marvel Studios and Walt Disney are completely loyal to Lee and Kirby’s Jewish vision of black-white race relations. As Kevin MacDonald outlines in his classic essay “Jews, Blacks, and Race [3],” Jewish organizations and individuals took a leading role in promoting black civil rights in America:

Jews have played a prominent role in organizing blacks beginning with the founding of the National Association for the Advancement of Colored People (NAACP) in 1909 and, despite increasing black anti-Semitism, continuing into the present. The NAACP was founded by wealthy German Jews, non-Jewish whites, and blacks led by W. E. B. DuBois. The Jewish role was predominant.

But Jews have promoted a very specific vision of black uplift, namely racial “integration” under the tutelage of the Democratic Party and the managerial state, which are dominated by a white and Jewish elite. Thus Jews have consistently opposed all forms of black separatism and isolationism, from Marcus Garvey in the first decades of the 20th century to Malcolm X in the 1960s to Louis Farrakhan today.

Wakanda is basically a black Switzerland: an neutral, isolationist society protected by high mountains that has grown wealthy and advanced by minding its own business. From the liberal-democratic-globalist point of view, Wakanda has no more right to exist that way than Switzerland does. Thus the fruits of its isolation must be shared. Its borders and bank accounts must be opened to the needy of the world. But there are just too many of these people. Thus global altruism can only tear down the advanced nations, not raise up the backward masses.

Only ethnonationalists oppose this globalist agenda. When White Nationalists come to power in the United States, we will create a black homeland on this continent, and we will call it Wakanda. Forget liberalism, the Democratic Party, and the managerial-welfare state. Only White Nationalism will make Wakanda real.