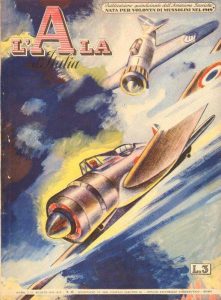 The British political theorist Roger Griffin has argued that the defining characteristic of fascist movements is a central myth of national rebirth, or palingenetic ultranationalism. His study of fascism (The Nature of Fascism) sparked controversy upon its publication because it diverged from the consensus at the time that fascist movements were purely reactionary and conservative in character; rather he located fascism within modernism and defined it as a revolutionary, future-oriented ideology that represented not a revolt against modernity but a quest to create an alternative modernity.

Esposito likewise begins from this premise in Fascism, Aviation and Mythical Modernity. He defines fascism as an attempt to generate order and national renewal through myth in the face of the crisis of modernity. Citing Mircea Eliade’s description of the need of archaic societies “to regenerate themselves periodically through the annulment of time,” he interprets interwar fascism as an attempt to destroy the old order and regenerate history itself, a “reconnection forwards” (Wiederanknüpfung nach Vorwärts). The quest to create an order that stood outside time and history required the use of myth as a suprahistorical reference point. Fascism thus represented a synthesis of modernity and myth.

The ultimate symbol of this synthesis was aviation. The interwar period, often known as the Golden Age of Aviation, witnessed great advances in aircraft technology. Aeronautical science was a cutting-edge field of study and represented the pinnacle of technological innovation at the time. Simultaneously aviation was cast as a symbol of the fascist myth of national rebirth and the birth of a new man.

The foremost prophet of the cult of aviation in Italian Fascism was Gabriele D’Annunzio. D’Annunzio was himself an aviator whose interest in flight began in 1908 after flying with Wilbur Wright and attending the Brescia air show the following year. He volunteered as a fighter pilot during the First World War (then over the age of 50) and in 1917 participated in the Italian air raid on the harbor of Bakar in Austrian Croatia. In 1918, he famously led an air raid of eight aircraft over Vienna in which thousands of propaganda leaflets were scattered over the city.

Flight was a prominent theme throughout his work. In the third book of his Laudi del cielo, del mare, della terra e degli eroi [In Praise of the Heavens, the Sea, the Earth and Heroes], for instance, he invokes Icarus’ flight: “Who shall gather them? / Who with stronger bonds will know / How to unite the strewn feathers / And try again the mad flight?” To the Fascists, Icarus was a symbol of the Promethean, Faustian spirit of mankind (particularly European man) and man’s quest for glory. D’Annunzio again invokes Greek mythology in an article entitled “Faith in Italian Aviation”: “Nike flies as in the myth, only not with two wings but with a thousand, with thousands upon thousands.”

D’Annunzio also conceived of the aviator-hero (Esposito’s term) as a religious martyr. The self-sacrificing heroism of the aviator who died fighting for his country became linked with quasi-religious redemption. He likened the sight of a plane spattered with blood to that of a crucifix and in his eulogy for the Italian aviator Gino Allegri, whom he hailed as a “mystic,” likened the droning of a plane’s engine to “the matinal ringing that announces the call to the divine service.”

During the First World War, aviators were also likened to medieval knights in the popular imagination. The air war was distinguished from the mass warfare of the ground war in that it consisted primarily of man-to-man combat; planes were thought of as “flying swords” in knightly duels. The aviator-hero thus symbolized the advent of a new martial elite that would merge the ideal of the aristocratic cavalryman with the modern “technological combatant,” bridging the gap between past and future. In this way the aviator also combined heroic individualism with a willingness to serve the collective.

Pulp fiction centered around aviation and tales of heroism in the air was enormously popular during the war. Aviators like Manfred von Richthofen (the “Red Baron”), Max Ritter von Müller, and Francesco Baracca were revered as national heroes. One poem in honor of Oswald Boelcke reads: “Hail, Boelcke, hardy seasoned aviator. / Hail, awesome crusher of the foe! / […] Hail, Boelcke, hail! To you as just reward / Does the Volk raise the crown of life / That will ever deck your hero’s deeds / And honor you with immortality!”

The Italians set many aviation records during the interwar years. Italy also built several new airports, pioneered research in aeronautical science, and made advances in civilian travel and airmail during this time. Exhibitions such as the 1934 air exhibition (Esposizione dell’aeronautica italiana), which drew more than one million people, instilled Italians with a sense of national pride by celebrating Italian aviation. Notable Italians in aviation included Francesco de Pinedo, who was the first pilot to fly a foreign plane to America and embarked upon a series of flying boat flights across the globe over the course of the 1920s; Umberto Nobile, who designed the polar airships Norge (the first aircraft to fly over the North Pole) and Italia and piloted them on Arctic expeditions; and Italo Balbo, who built up the Italian Royal Air Force under Mussolini and embarked on a few transatlantic flights, most notably in 1933 with his famed “Italian Air Armada.” Balbo was also a prominent Fascist and one of the four leaders who organized Mussolini’s March on Rome in October 1922.

Aviation was a central motif in Italian Futurism, particularly during the 1930s, and the airplane represented the ultimate symbol of Futurist ideals: speed, machinery, adventure, heroism, etc. Futurist artists (a number of whom were also aviators) were also fascinated by how the aerial perspective represented an “absolutely new reality, one that has nothing in common with the reality traditionally constituted by earthbound perspectives.” They launched the school of aeropittura (aeropainting) in 1929, giving rise to iconic works such as Tullio Crali’s Nose Dive on the City and Before the Parachute Opens and Tato’s Flying over the Coliseum in a Spiral (Spiraling). Aeropainting, like Italian Futurism in general, was closely associated with Fascism; Marinetti declared that it was a product of the same “revolutionary, aggressive, fervid spirit” behind Fascist aviation. Some aeropaintings were explicitly fascistic, such as Thayaht’s The Great Helmsman, which depicts a muscular Mussolini at the helm of an aircraft with several Savoia-Marchetti S.55 seaplanes (the same planes flown on Balbo’s transatlantic flights) behind him. Apart from aeropittura, the Futurists also devised other “aeroplane” arts: aeropoesia, aeroscultura, aeroachitettura, aeromusica, aerodanza, and even aeropranzo (Futurist meals).

Flight also figures in Marinetti’s Futurist novel Mafarka the Futurist. Mafarka (the protagonist) creates a giant winged cyborg superman, Gazurmah, a symbol of the ultimate fascist new man. Gazurmah eventually kills his creator, representing the destruction of the old order. Mafarka’s death (and rebirth in the form of Gazurmah) enables Gazurmah to soar to greater heights.

Naturally not all aviators were fascists, and aviation-related tropes and rhetoric were utilized by both fascists and liberals. The German-Jewish art historian Aby Warburg, a bourgeois cosmopolitan who championed liberal modernity, notably designed a postage stamp bearing the motto “Idea vincit” scrawled across the wings of a plane as a symbol of his commitment to the Weimar Republic, which Esposito contrasts with D’Annunzio’s proto-fascist ideals. Nonetheless, although there were liberal contributions to aviation discourse, the cult of aviation was most compatible with Fascism and found its highest expression in Fascist Italy.

Fascism has created a new world. Mussolini has brought about a new era of history. […] It is an ancient, rejuvenated race that sets itself against the old age of the world, a new faith that rises up against old habits, decrepit beliefs and ideologies: it is a new destiny. […] Flying is at the pinnacle of this new power.

Esposito also quotes Ernst Jünger’s preface to Luftfahrt ist not! [Aviation Is Necessary], a volume he edited in 1928:

. . . the airman is perhaps the sharpest manifestation of a new manhood. He represents the type that was already showing signs of itself in the war. […] Here, under the aegis of war, was combined every element of energy, distinction, and technical intelligence that characterizes modern civilization, as well as the secret categorical imperative that lends the final hardness to the alloyed metal of machines […]. […] Perhaps he illustrates most clearly the profound link between the soldier’s and the worker’s condition. For although they have remained the same, the forms of the soldier and the worker are here mingled with each other. […] The path that led across the heroic landscapes of war continues through the more sober fields of labor, and in both cases it is the flier’s heart that gives the activity its real value.

To Jünger, the rise of technology heralded a social revolution in which all human activity would be converted into labor in the form of large-scale industrial processes, which he termed “total mobilization.” Although Jünger was strongly critical of the calculative, utilitarian mass deployment of technology, he predicted that total mobilization would give rise to a new breed of man (the “worker”) characterized by heroism and sacrifice who could save technology from itself: “The phase of destruction is replaced by a real and visible order when that race accedes to dominion that knows how to speak the new language, and not in terms of mere intellect, of progress, of utility, or of convenience, but as an elemental language.” The worker would seek not to wield technology as a means of obtaining total control and security, in contrast to bourgeois man, but rather to achieve unity with it, dissolving the “tension between nature and civilization, organic and mechanical world.” The aviator thus embodied the ideal of the new man.