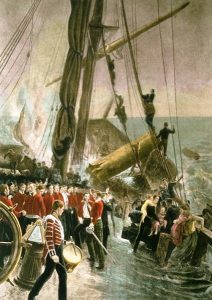 If we are to listen to these incoherent beta males and failed female feminists, we are told to conclude that women have been systematically oppressed by men, and by the male-oriented system such men have built.

Well, let’s use an example to explore the feminist ideology and how it deals with the two sides of evidence (by two sides I mean evidence which agrees with them, and evidence which doesn’t). The phrase ‘women and children first’ is very well known in the West, and especially amongst the people of the United Kingdom of Great Britain. The phrase is described as ‘a code of conduct dating from 1852, whereby the lives of women and children were to be saved first in a life-threatening situation, typically abandoning ship, when survival resources such as lifeboats were limited.’[1] [2] This women and children first mentality has no basis in maritime law, but instead in moral law: when disaster hits, men are expected to be willing to prioritize the safety of women and children. This is societal and based on a respect for women and children, and not based on a disrespect for men.

The most famous case and example of women and children first in use is the Titanic. In the Titanic disaster of 1912 the result of the code of moral conduct is that 20% of all men survived, 52.29% of all children survived, and 74.35% of all women survived.[2] [3] How dare sexism against women save so many of them and their children. Where is the equality in the result of deaths? 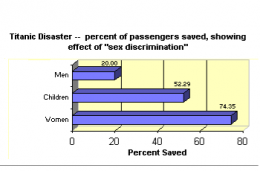 If we are to separate men, women and children by class, the lower the class the higher the proportion of death, which isn’t too surprising when a ship is sinking and the lower classes get the lower and closer to the engine rooms. Although even by this standard the third, second, first and crew class of men suffered the top four loss rates. Then it is children and women of the third class, then women of the second, crew and first class, then the second and first class of children all survived. Did you spot one curious detail? Women crew class. Woman had jobs on the ship, this level of sexism is terribly oppressive. I’m sure they were all cleaners and maids in this oppressive Titanic man system. 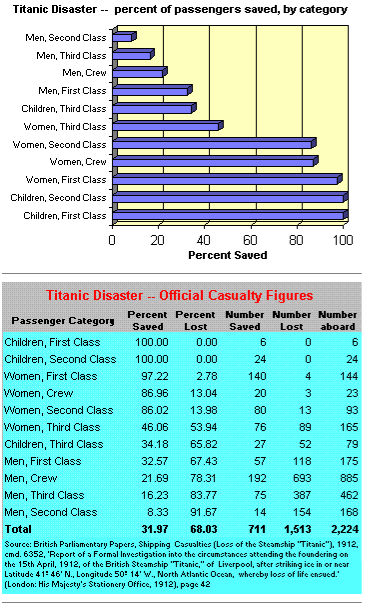 So, what is the Feminist response to this evidence? Well, as everything with schizophrenic hypochondriacs thinking, the response is a plethora.

So, let’s go through a few of these responses.

The simplest reaction is to assert that the moral policy of putting women and children first is to assert that women are weak, thus should come first otherwise they would die. Like how opening a door for the bull dyke is the assertion that she is a small delicate flower, and thus weak. This is easily refuted by pointing out that women came first because we value them and we men sacrifice ourselves for them, not because they are weak, but because we value them so much. But, this won’t stop feminists from asserting they are being compared to children, rather being valued to the same level that children are: that is to say valued like a treasure.

The line of thinking that women and children are like treasures which need protecting or sacrificing for is known as ‘benevolent sexism’ among Feminism. That is to say:

‘Experts say this type of sexism is harder to spot than the ‘hostile sexism’ we are more familiar with – because it often masquerades as gallantry. It is typified by paternal and protective behaviour, from encouraging smiles to holding doors open.’[3] [6] This is the demonising of masculinity and our biological urge to respect and value women and children, not out of their weakness, but as a coherent and social togetherness.

These statements come from Professor Judith Hall, of Northeastern University in Boston, and the study co-author Jin Goh. They directly attack the idea of ‘women and children first’ when they say: ‘Examples of hostile sexism included agreeing that women tend to exaggerate problems at work, while someone who is benevolently sexist will believe women should be rescued before men from a sinking ship.’[4] [7] So, if you agree that the general attitude of women is to exaggerate a problem at work, you are a hostile sexist, even if true and factually supported. But not just that, if you would rescue a woman before a man from a sinking ship you are benevolently sexist, which means you are a sexist worm burrowing into the core of the female apple like a beta male, instead of taking your big manly bite like a Neanderthal hostile sexist.

Lucky for us, most women don’t actually agree with feminism and plenty of women actually fully support this benevolent sexism which is better known as being a normal, natural man. Here are two female examples:

‘Jill Kirby, a writer on social policy, said: ‘There are times when it is very important for women to be protected. We should accept this and not seek to stamp out what is likely a good instinct on the whole.’[5] [8]

‘The only people who are sexist in this nonsense piece of research are the researchers themselves. If they really believe that women who revere chivalry are going to be prevented from becoming heart surgeons or bankers then they have a very low opinion of women indeed.’[6] [9]

If we didn’t think that women are pathetic and weak then why would be have the policy in the first place? Aren’t we all individuals? Even Children? Even when in danger and categories can save the most people the quickest because it requires little reaction time? Well, let us imagine we didn’t have this policy because women were seen as strong, and because of this far more women died. Wouldn’t this tit-bit of information be slammed down onto our dinner table by our strong single mother who cucked us and who isn’t the one cooking the dinner? This would be used as clear evidence that women weren’t and aren’t valued enough. That women were allowed to drown in the perpetual ocean of male oppression and pushed down by the feet of power-hungry men who were probably the ones who pushed them into the water just to save themselves.

What are we to conclude when both sides of the argument are dominated by such schizophrenic thinking? Damned if we don’t, damned if we do, eh? When we look at the survival rates of 20% for men, 52% for children and 74% for women we can see that not only do we value women more than men, but even more than children. The modern world is not exactly empty of cases of society putting women before children, and we can certainly see that women regularly sacrifice children for themselves. ‘Women and children first’? No, women first only, that’s the only way to not be sexist, or something, something, something.[7] [10]

Now that all arguments are sunk like the Titanic, where will the feminist mind go? Somewhat predictably they move on from saying men oppress women, to men are oppressed by men: that men need feminism because ‘women and children first’ is sexist against men.

Well, first of all if men built an oppressive system to subjugate women and benefit men, why would men be victimised by this system? It is somewhat telling that feminist thinking only concentrates on the oppression of men when it cannot justify, nor prove that society is oppressing women: it is the death throe and last resort of an ideology that is trying to capitalise on the emotional and psychological weaknesses of men when they are down and out, trying to give a defeated feminist a way out of the brute defeat out of chivalry, or merely to tap into the beta male’s anger and resentment for their masculine failures.[9] [11]

To conclude: is feminism reasonable? No, it’s rhetorical sophistry which tears open emotional and sexual differences just to gain a little power. Is feminism good for women? No, as it puts women before all else which fundamentally damages society and women in effects. By denying the overlap as an outlier and accepting the differences between men and women as oppressive, feminism harms women by systematically denying the best and confirming the worst.

So, what should feminism be? Feminism should be used as a self-imposed label, and maybe we should use that as a label to tell us something about said self-imposed person, and maybe that label is a clear signal that such women should be banned from politics, or even society! For being so full of hubris, rhetorical sophistry, and of course for being such self-inflated atomised retards. 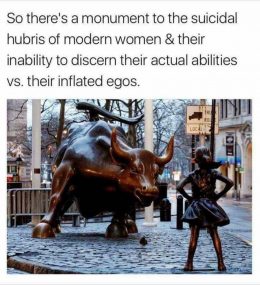 The hottest-take about this subject is that while women as a class weren’t systematically oppressed in the history of the West, feminism is showing us why it isn’t such a bad idea for our future.[9] [11][10] [13]

[2] [16] All tables, percentages and statistics are taken from: Titanic Disaster: Official Casualty Figures and Commentary – http://www.anesi.com/titanic.htm [17]

[3] [18] Why chivalry may not always be what it seems: Men who hold doors open and smile may actually be sexist, study claims – http://www.dailymail.co.uk/sciencetech/article-2988310/How-smile-reveals-man-s-SEXIST-Beliefs-women-betrayed-facial-expressions-claims-study.html [19]

[6] [22] Laura Perrins: Women and children first? You are just a sexist pig – https://www.conservativewoman.co.uk/laura-perrins-women-and-children-first-you-are-just-a-sexist-pig/ [23]

[8] [26] An example of five things that feminists could look at if they actually cared about men, although the solutions are terrible and weak: 5 Ways Society Is Sexist Against Men (and How We Can Fix It) – http://www.cracked.com/blog/5-ways-society-sexist-against-men-and-how-we-can-fix-it/ [27]

[10] [30] An article discussing ‘women and children first’ after the Costa Concordia disaster from the Guardian: Costa Concordia: are women still prioritised over men in evacuation procedures? – https://www.theguardian.com/politics/reality-check-with-polly-curtis/2012/jan/16/costa-concordia-women [31]