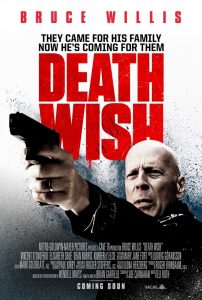 All the hype about the recent reboot of the film Death Wish being an “Alt Right movie” is just that—hype, and no more. The original, reviewed here [2], has much more relevance to today’s Dissident Right—even after forty-five years—than the current film has after just as many minutes.

Still, the 2018 Death Wish remains a tolerably good film with some solid suspense, creative action, and genuinely creepy moments. Director Eli Roth also does a fine job of updating the story so that the lone vigilante who roams the mean streets now has to deal with phone cameras and social media. Set in Chicago, Roth makes good use of the cityscape to propel the narrative, especially the city’s famous L-trains.

Instead of being an architect, Paul Kersey is now a surgeon. Surprisingly, the film contains some implicit and explicit pro-gun messaging which is the same as in the original and leads to a snazzy payoff at the end. On a technical level, the remake even surpasses the original in some ways. Where the original lags a bit in the middle during Paul Kersey’s psychological transformation from private citizen to coldblooded vigilante, the remake maintains a crisp pace throughout. Thankfully, the remake abandons the freaky, modernist score of the original and instead employs music more suitable for the above-average action-thriller it has turned out to be.

In the ways that count, however, the remake doesn’t even come close to excelling the original. The 1974 Death Wish did not try to be great art. It resonated with audiences because it was pulp fiction rendered red in tooth and claw and because it gave expression to real fears that white Americans were losing control of their major cities. Further, it was as honest as a film could be at the time.

To achieve this, Charles Bronson turned in an unforgettable performance. Admittedly, he’s not the most versatile actor. But when the script called for him to keep his mouth shut while hunting muggers, there was none more fearsome. Sort of like a cross between Charlie Manson and Genghis Khan, Bronson’s Paul Kersey personified the anger and contempt many whites were feeling as they saw their once-great cities slipping away from them. Bruce Willis, the lead in the 2018 remake, inspires none of this. He’s bald, he’s doughy, and at sixty-two, he’s far too old. Further, he is cast against type. He needs wisecracks and clever dialogue in order to exhibit his particular charm and wit. “Zed’s dead, baby. Zed’s dead.” Yeah, there was nothing as memorable as that in this script. Willis is certainly not a bad actor; he’s just not convincing as a sullen, lone wolf killer. After his family is attacked, he seems to just sleepwalk through the rest of the film. Perhaps he was haunted by Bronson’s performance, or tried a little too hard to emulate it?

Another nit to pick involves the cartoonish fighting in the remake. In the original, we see the following primitive pattern: mugger encounters Kersey. Mugger draws weapon on Kersey. Kersey shoots mugger. Kersey shoots mugger again to make sure he’s dead. Kersey runs away. This might not be terribly exciting to modern audiences, but it depicted the reality one would most likely experience when dealing with muggers in such a fashion. In the remake, the two Kersey women attempt to fight off their three male attackers. And they do pretty well, too, until the attackers decide to shoot them. This is pure feminist nonsense. In the remake, Kersey grapples with a bad guy who dies when a bowling ball lands on his head and causes him to accidentally shoot himself in the mouth. And these are not even the worst examples. Oh, and there’s gore. Lots of gore. Make sure to close your eyes at the very end of the scene which takes place in a mechanic’s shop. Some things you just cannot unsee.

On a deeper level, Death Wish fails in its treatment of race. As I pointed out in my review, the original is in many ways about the legitimate white reaction to non-white crime that was surging in our cities at the time it was made. Yes, in the original, an unrealistic half of the criminals were white. But I am willing to overlook this and attribute it to making political concessions to the egalitarian mores of the day.

Where the original made concessions to the beast, however, the remake bows down before it and then shows it its neck. It does this by making almost all of the bad guys Kersey encounters either white or unclassifiably dark (i.e., not black), and whenever we find a black baddie, there is always something that exonerates Kersey’s treatment of him. But, as with most Hollywood movies these days, the evilest of the evil are always white, in spite of the fact that blacks are responsible for most crime [3], especially in places like Chicago.

I will run through the exceptions right now. Early on, a Hispanic tips off the bad guys regarding Kersey’s home address. He is tattooed, snarly, and suitably thuggish. So far so good. The first muggers Kersey encounters are black, who proceed to kick the shit out of him. (This is before Kersey acquires a gun.) Yes, these are bad guys, but they come out on top. Beating up on whitey is one way for an anti-white Hollywood to appease anti-white audiences. Then there’s the nigger gangbanger named Ice Cream Man. Kersey shows up to his crib in broad daylight and just wastes him. Yes, this remains true to both the vigilante theme of Death Wish and what would likely happen in reality. However, Kersey learns about Ice Cream Man from a little black kid whom Ice Cream Man had shot. Catch that? Hollywood requires a perfectly innocent black victim before Kersey has the right to take out a black criminal. Kersey’s white victims certainly do not require such consideration.

This leads to my final issue with Death Wish. Where the original deals with vigilantism and all the moral quandaries it entails, the remake deals more with revenge (or, really, justice), which gives the thinking man far less to chew on. (I’m reminded of the hilarious motto of the Tick, an ironic superhero if there ever was one: “Evil is bad! And Good isn’t!”) In the original, no attempt is made to find the three thugs who attacked Kersey’s family. But in the remake, revenge against these three becomes the very point of the story.

Also, by giving the villains names and over-the-top agendas, the remake fails to capture what was so evocative and menacing about the original, where the criminals were all nameless, predatory, and real. In 1974, we were lashing out at the incomprehensible evil which was eating away at our cities. There can be no resolution to that. In 2018, however, we are going after Knox, Joe, and Fish, because Knox, Joe, and Fish broke into Paul Kersey’s house and murdered his wife. Kill those three and that’s all the resolution you need.

The ending encapsulates this dichotomy perfectly. Kersey is home with his recovering daughter when the last remaining bad guy predictably breaks in again, this time with a pair of trained killers armed with automatic weapons. We are no longer on the streets where vigilantism is morally ambiguous, but at home, where self-defense is sacrosanct. And because this is Kersey’s home turf, he’s able to set traps for them and whack them one by one. Sound familiar?

Go to High Noon. Go to Witness. Go to freaking Home Alone. This schtick has been done before. Did the filmmakers not realize they were spoiling their film by opening it up to comparison with a whole host of earlier films, including Home Alone? By indulging in such cinematic clichés and cartoonish violence, as well as by paying such obsequious homage to political correctness, Death Wish only disappoints. It takes a perfectly good film premise and turns it into a comic book that does nothing more than entertain while pretending to be edgy. Better it just entertain.

Spencer J. Quinn is a contributor to Counter-Currents and the author of the novel White Like You [4].