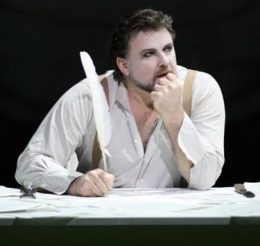 Christopher Ventris as Palestrina in the 2009 Bavarian State Opera production of the opera.

Hans Pfitzner’s Palestrina is one of the unsung masterpieces of twentieth-century opera. The work is based on a legend surrounding the Renaissance composer Giovanni Pierluigi da Palestrina, according to which his composition of the Missa Papae Marcelli convinced Tridentine officials not to ban polyphonic music from the Church. Pfitzner casts Palestrina as the savior of sacred music and a lone genius divinely appointed to be the defender of tradition and great art. The opera (subtitled “A Musical Legend”) often deviates from historical fact, but it is really an allegory rather than a historical drama.

A contemporary of Richard Strauss and Gustav Mahler, Pfitzner belonged to the last generation of German Romantics. As one of the last composers of a dying tradition, he likely saw himself in the character of Palestrina. He never attained the fame or greatness of Strauss, his rival, but nonetheless composed a handful of notable works. Like Strauss, his works are thoroughly German in character. Beyond Palestrina, his best works are his Second String Quartet, his Symphony in C-sharp minor, and his cantata “Von deutscher Seele” (based on a text by the Prussian poet and writer Joseph Freiherr von Eichendorff).

Pfitzner studied composition and piano at the Hoch Conservatory in Frankfurt in his youth. After holding jobs as a teacher at the Koblenz Conservatory and conductor at the Staatstheater Mainz, he became the director of the Conservatoire de Strasbourg and of the Strasbourg Opera. Following the French annexation of Alsace in 1918, Pfitzner was forced to leave his life in Strasbourg behind. He spent the Weimar years composing and teaching at the Prussian Academy of Arts in Berlin.

Pfitzner’s relationship with the Third Reich was acrimonious, largely because Hitler was under the false impression that he was half-Jewish. Pfitzner also objected to the regime’s treatment of certain Jews. However, he was a staunch defender of German culture and hardly a philo-Semite. He remained a personal friend of Hans Frank, Hitler’s legal advisor, and served on the editorial staff of the Süddeutsche Monatshefte, a Munich-based magazine that promoted völkisch nationalism. It is in part due to his nationalist sympathies that his music is seldom performed today.

One of Palestrina‘s earliest and most avid proponents was Thomas Mann, who founded the Hans Pfitzner Association for German Music in 1918. In a letter to Bruno Walter, who directed the opera’s premiere, he praised the work’s “metaphysical mood, its ethos of ‘cross, death, and tomb,’ its union of music, pessimism, and humor.”[1] [2] But as his Leftward shift following the First World War progressed, he came to disparage the opera for its implicit anti-liberal themes and distanced himself from Pfitzner.

Palestrina begins in late 1563, toward the end of the Council of Trent. In the First Act, Cardinal Borromeo visits Palestrina to inform him of the Pope’s plan to ban polyphony and revert to Gregorian chant. He implores him to compose a mass beautiful enough to convince the Church not to enact the ban. Palestrina, grieving the death of his wife, refuses. Suddenly, in Scene Five, he is visited by the ghosts of great composers from the past (only two are named: Josquin and “Enrico Tedesco,” likely Heinrich Isaac), whose appearance is accompanied by musical devices reminiscent of Renaissance music. They exhort him to “fulfill his earthly mission” (Erdenpensum) and place the capstone in “music’s great edifice” (“Der höchsten Spitze Kreuzesblume / Setzt auf der Töne Wunderdom!”), bestowing him with the divine task of continuing their legacy. In the subsequent two scenes, Palestrina is visited by a celestial host of angels, and in a flash of divine inspiration, composes his masterwork in one night. It is the most sublime scene in the whole opera.

The Second Act begins with a meeting of the Council in the palace of a certain Cardinal Madruscht. The meeting itself does not actually begin until Scene Five (the first four scenes mostly feature the various delegates shuffling into the great hall, greeting other dignitaries, and exchanging insults). It soon descends into petty squabbling, and chaos ensues. The meeting is eventually adjourned. A dispute among the Spanish and Italian servants afterwards prompts Cardinal Madruscht to order his soldiers to gun them down, and the fall of their bodies marks the end of the act. Pfitzner himself wrote Palestrina‘s libretto, and his depiction of the officials’ buffoonish incompetence is a deliberate satire of the failings of parliamentary democracy.

The Third Act opens with Palestrina alone in his home. We learn that he was imprisoned by Borromeo and that his son, Ighino, gave the manuscript of the mass to the hangmen, who would otherwise have executed him. As Ighino recounts this, cries of “Evviva Palestrina! Long live the savior of music!” are heard from the street. In the following scene, Pope Pius IV arrives, preceded by papal singers and eight cardinals, and asks Palestrina to lead the Sistine Choir. The contrite Borromeo then begs Palestrina’s forgiveness, and Palestrina embraces him. The act ends with Palestrina alone at his organ, with cries of “Evviva Palestrina!” still audible in the distance.

There is a subplot featuring Ighino and his fellow student Silla, who eschews Palestrina’s school in favor of more contemporary music. Silla moves to Florence, while Ighino promises to remain by his father’s side. Thomas Mann describes Silla as a symbol of “individualistic emancipation in idealistic connection with the endless progress of the human race.”[2] [3]

Musically, the orchestral writing is grounded in the lush Romantic idiom of composers like Schumann, Weber, and Tchaikovsky. The musical highlights of the opera are the preludes to each act, the latter scenes of Act One, and the final scene of Act Three. Pfitzner’s contrapuntal writing is also very well-wrought.

There are also echoes of Wagner in Palestrina, in its premise (which recalls Die Meistersinger), its tonal language, and its use of leitmotifs to identify various characters, places, and ideas (e.g., the tolling of a bell signifies the Catholic Church). Polyphonic music is referred to as “gesamte Kunst” (“Und was der gesamten Kunst er droht, / Auf einen Streich ist’s sicherer Tod”), perhaps an allusion to Wagner’s idea of the Gesamtkunstwerk.

There are a handful of musical quotations throughout: from Palestrina’s Missa Papae Marcelli itself, Luther’s “Ein feste Burg ist unser Gott,” and Pfitzner’s own opera Der arme Heinrich.[3] [4] The primary motif of the mass – a rising fourth followed by a stepwise descent – which first appears in the “Kyrie,” is quoted when the masters appear and when the angels appear at the beginning of Scene Six. Motivic material from the “Christe eleison” and “Sanctus” is also quoted.

Pfitzner’s main philosophical influence was Schopenhauer, and the opera’s epigraph is a quotation from Schopenhauer’s Parerga and Paralipomena contrasting the “purely intellectual life of the individual” and the corresponding realm of the arts and sciences with the realm of worldly affairs, governed by the will.[4] [5]

The figure of Palestrina was clearly influenced by Schopenhauer’s portrait of the genius, whom he characterized as one endowed with the ability to engage in pure contemplation and thereby temporarily emancipate himself from the domination of the will. The tripartite structure of the opera contrasts Palestrina’s contemplative nature in the First and Third acts with the striving of the will manifested in the bickering of the Church officials in the second. The characterization of Palestrina as a solitary, world-weary figure recalls Schopenhauer’s description of the genius as one who experiences an unusual degree of suffering.

Schopenhauer held that music, being the most direct expression of the will, ought to take precedence over libretto in opera, and Pfitzner generally takes this to heart. The conflict between music and language is also present thematically in the contrast between the First and final acts and the Second Act. Pfitzner’s antipathy toward many of his contemporaries is reflected in this. He opposed the attempts of composers like Schoenberg (whose aesthetic theories were influenced by Wittgenstein and logical positivism) to introduce formulaic serialist techniques into musical composition (in a sense, an incursion of language into music) and accused them of covering up their lack of inspiration and genuine creativity with facile cleverness, which, like Wagner, he associated with Jewishness in music.

Some might point out the irony that Pfitzner disdains politics in Palestrina, yet simultaneously was an ardent nationalist who commented on political matters. This is not a contradiction, though, because his political views were a direct extension of his mission to carry the legacy of German culture into the twentieth century. He believed that egalitarianism and modern liberalism were enemies of great art and artistic genius.

The best recording of Palestrina is the one featuring the Bavarian Radio Symphony Orchestra conducted by Rafael Kubelik, which was released on Deutsche Grammophon in 1989. There is not a weak link in the cast: Nicolai Gedda in the title role, Dietrich Fischer-Dieskau as Borromeo, Brigitte Fassbaender as Silla, Helen Donath as Ighino, and so on. The recording runs over three hours, but the music under Kubelík’s direction never stagnates. His musical vision and the intensity he brings to the score set this version apart from other recordings (though Otmar Suitner’s 1986 recording can also be recommended for Peter Schreier’s performance as Palestrina).

In spite of Palestrina’s eventual triumph, an air of death pervades the opera (a “sympathy with death,” in Pfitzner’s words as recounted by Mann). Palestrina is a frail old man whose death is imminent. Pfitzner was keenly aware that he lived at the close of an era. More than a century after the opera’s premiere, the tradition he sought to preserve has become a figment of the past. The great challenge of the future will be to create a living artistic tradition worthy of succeeding it.

[3] [8] A bit of trivia: The title role in the premiere of Der arme Heinrich, based on a text by Hartmann von Aue, was sung by Reinhard Heydrich’s father.