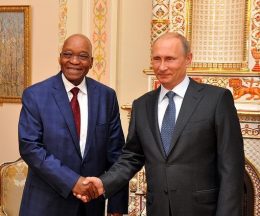 Last month, President Jacob Zuma of South Africa resigned from his office after nearly a decade of looting the treasury for himself and his cronies in what was once a prosperous, First World, Western society. The endemic Third World corruption plaguing his administration took place amidst the ongoing political, economic, and social disintegration of South Africa, which could very well lead to nearly four and a half million whites having no future in that nation.Given that brutal murders and the torturing of white farmers seems to have become an endemic trend, perhaps that fate is already a reality.

This trajectory toward oblivion has only hastened under South Africa’s new President, Cyril Ramaphosa, who has taken a page out of Mugabe’s book and called for the confiscation of white farmlands without compensation. I am sure the media and political elites of Western Europe and North America who demand that we accept all the “wretched refuse” of the Third World will be tripping over each other to accept white refugees with open arms . . .

By the way, if you have not already, please sign this petition [2] to allow white South Africans priority to emigrate to the United States.

What is perhaps most remarkable about the recent change in South Africa is the sudden emergence of sympathetic mainstream Right-wing media coverage of the plight of the Boer people. Lauren Southern’s documentary, Farmlands [3], particularly stands out as an unprecedented and concerted effort to confront taboo subject matter for a “normie” audience. Most importantly, it is a meticulously-researched tour de force, reckoning with the dark realities of a failed state that is grounded in a myopic and utopian vision.

Many in our circles scoff at portraying ourselves as victims or as being oppressed. However, this type of narrative is both true and vital for our future success. Indeed, what is perhaps most satisfying is seeing the anti-white Left exposing themselves as the cretins they are [4] by whining that Southern is immoral for sympathizing with the grieving white families of tortured and murdered farmers.  I cannot stress enough the real value of pro-white metapolitics focused on compassion for people such as these. The anti-white Left can barely hide their hatred for us under superficial themes such as “social justice” or “confronting whiteness.” Let us make sure such forces can never take refuge in cynical and illusory moral concerns so those on the fence can see just how depraved and hateful our enemies are.

While the dire fate of white South Africans in the “rainbow nation” is inspiring needed attention in the minds of white Americans, who are themselves on a trajectory to becoming a minority, I must also call attention to those who are both “white-pilled” by this development and who also concur with the meme, “Russia is our friend.”

On the contrary, Russia is South Africa’s friend. The Soviet government backed the pro-Communist African National Congress (ANC) for decades to overthrow the Apartheid government. While the Soviet Union is gone, the ANC is now the dominant ruling party in South Africa for the long haul. (So much for the “democracy” that the anti-Apartheid movement espoused.) Their affinity through a shared history of Leftist struggle endures in how both Russia and South Africa see each other today. Did the Russian government issue a statement condemning Ramaphosa’s unconstitutional legislation to seize white-owned farmland? In January and February alone, there have been over 119 [5] anti-white farm attacks in South Africa as the ANC looked the other way. Has this simmering civil conflict made what some call in our circles “the world’s one white power” hesitate in signing deals for building nuclear power plants in South Africa? If civil war explodes in South Africa, would Russia hesitate to sell the ANC the weapons necessary to end the centuries-long presence of the Boers on the tip of the continent, once and for all?

The relationship between South Africa and Russia is akin to that between Russia and Venezuela. The Chavismo of Maduro is not so much socialist in economic terms as it is anti-white Bolivarian nationalism. It is another failing state that espouses “social justice,” seeking outside help from a power that dabbles in Third Worldism.

Now, this essay is not meant to be a screed against Russia. I have written favorably [6] about Russian foreign policy in the past. I do not harbor a vicious hatred of ethnic Russians, such as that which American neoliberal and neoconservative elites clearly exhibit in their ongoing hysterical conspiracy theories regarding Twitter bots and such. Tchaikovsky [7], Dostoevsky, and Lobachevsky are just some of the figures to emerge from that legendary tundra nation to stand in the pantheon of our heritage and for which we fight to preserve. Nor do I hate Putin or his government, which has indeed partially aided a resurgent Right-wing metapolitics in Europe.

Putin does not ally with countries like South Africa or Venezuela because they are anti-colonial, anti-gringo, or anti-white in nature. He is merely playing the “great game” for spheres of influence, just as his Czarist precursors did in Central Asia. Today, that game is more nuanced and expansive than it once was, involving many more than only two imperial actors at a conference table, but the basic geopolitical truths remain the same.  If the Russians do not gain leverage – economic, strategic, or otherwise – over these “gap states [8],” then their competitors or wary friends – namely, the US and China, respectively – will fill that vacuum.

An overarching ideology and a sense of destiny and purpose often animates such geopolitical ambitions. Although they served as a cynical means of cloaking underlying motives, Pax Americana was said to fit within a grander scheme of now-defunct classical liberalism, just as an upcoming Pax Russiya possibly fits within a grander scheme of seeking common cause with those of the Global South under the white Yankee boot. Such rhetoric is likely just as cynical as it was in the case of American power. Nonetheless, it shows a tension between the values of the Orthodox Church, traditionalism, and pro-Russian natalist policies at home and a foreign policy that seeks solidarity with Venezuelans and confrontation with Ukrainians.

Russia’s position in South Africa today says something fundamental about the current geopolitical order. The rise of Russia in the last decade or so is not related to white Europeans reclaiming a hegemonic destiny in world affairs. Rather, it says something about a declining Pax Americana experiencing a death of a thousand cuts: unrelenting floods of Third World immigration, dysfunctional internal politics, endless war in places like Iraq waged predominately at the behest of Israel, and so on. In its place, a new multipolar order is emerging which is mostly non-white. The emerging institution poised to inherit the Earth is BRICS – Brazil, Russia, India, China, and South Africa – not NATO or the European Union.

This essay is not meant to mourn the loss of Pax Americana or the globalist policies that define the EU. As an American nationalist, I long for the days of the pre-Hart-Cellar 1950s retro-futurism, when Americans confidently believed Old Glory would be planted on Mars by 2000. America has been “hijacked [9],” in the words of Greg Johnson, meaning that the global balance of power has fundamentally shifted, with Third World nations like South Africa being taken under the wings of Russia and China.

Our movement can gain valuable lessons from all this. Like most of you, I hope for our ideas to become normalized, and to eventually dominate the public discourse. In the American context, I hope to see the tens of millions of disaffected working and middle-class, Trump-supporting Americans venturing further Right, beyond civic nationalism, and becoming receptive to pro-white metapolitics. Those in our circles who focus on rhapsodizing about the return of a Czarist Russia do not further that vital objective. We can learn from Russia in terms of it being a nation that brought itself back from the brink of demographic ruin by attaining rising native birthrates and an outlook that hopes to preserve its unique Orthodox culture in a rapidly polarizing world. That said, the unique autocratic traditions which run deep in the Russian soul cannot be transplanted into the blue-pilled white American psyche.

People who understand the realities of race, ethnicity, culture, religion, and civilization understand that a nation’s form of optimal governance stems in large part from the peculiarities of its people. Therefore, to make our ideas palatable to average white Americans, we must push our ideas by speaking to the traditions that resonate most with them. George Washington, Thomas Jefferson, Andrew Jackson, and Theodore Roosevelt – all of whom were White Nationalists – were once demigods in the American consciousness. By bringing back their status as heroes, we would effectively reach out to the millions of Americans who have that vague, uncertain feeling that something is fundamentally wrong with their country when they see yet another Confederate monument being toppled.

Of course, this lesson translates into how we as a movement can raise awareness about the ongoing clash of civilizations in South Africa. Many in our circles in America have pointed to our own similarities to the Boer people. The wagon trains carved a path across both the Great Plains and the Transvaal. We both value an armed citizenry. We both seek a renewed Christian spirituality. We share folkways built upon a bucolic lifestyle. We both ushered in the creation of new ethnic groups that forged European outposts. These are all elements that particularly tie us to the Boers. This message will resonate with Americans. They are already slightly curious about it, if all the recent media attention is any indicator.

When I first found out about the gruesome nature of the murders and assaults on white South Africans, I was demoralized to find that those who brought attention to it barely achieved any traction beyond being denounced as evil, racist, or hateful. Over the last few months, a narrative once confined to the fringes has become increasingly mainstream [10]. South Africans like Simon Roche of Suidlanders are to thank for that. Organizations like his helped mobilize at least eighteen thousand overwhelmingly white South Africans – eighteen thousand [11] – in October 2017 to protest the murders of white farmers in a country of merely four and a half million white people. That turnout was nearly eighteen times greater than the “Unite the Right” rally in Charlottesville, which was the largest pro-white rally in the United States in decades.

In conclusion, we have a lot to learn from the Boers. By looking to them, more so than Putin or Russia, we find a story that will personally hit home for a broad swath of white America. We can only win the debate when we are controlling the conversation, as we already are to a large extent when it comes to the farm murders in South Africa. We Americans are on track to becoming a reviled minority in the country our forebears built, just as white South Africans are a hated minority in their land today. Therefore, bringing our concerns to the forefront of the political conversation is an especially worthy goal in today’s uncertain times. In our hopes of winning control over the discourse, we will either hang together with the Boers, or we will all hang separately.