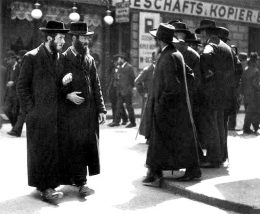 Like most of your articles, I thought your “Letter to the Antisemites” [2] from March 11 was perfectly reasonable and well-put, yet I believe it missed a few crucial points. I actually share your negative opinion of anti-Semitism when you describe it not only as racism against Jews, but also as contempt for them. Contempt, as a real-world emotion directed towards others in real time, can make a person ugly. No sane person wants that unless absolutely necessary. Then, at the end of your letter you state that “Obsessing over Jews all the time seems like a waste of time.” Again, I agree. In fact, it’s impossible not to agree with such a statement. Obsessing over anything all the time will be a waste of time, no?

I think this says something about your argument that perhaps you didn’t intend. You are not arguing against anti-Semitism so much as the abuse of anti-Semitism. Such abuse leads to obsession. Such obsession leads to some pretty rotten times, since what the anti-Semite obsesses over is the very thing for which he has contempt. Obsession and contempt: that’s the double whammy right there, isn’t it?

In the middle of the letter, however, you bring up the reasoned and scholarly anti-Semitism (I prefer the more dignified and accurate term “counter-Semitism”) of Kevin MacDonald and his Culture of Critique [3]. You give it a fair rundown, you highlight its strengths, you admit its plausibility, but you ultimately profess skepticism of MacDonald’s “Judaism as evolutionary strategy” thesis until more data comes in. Fair enough. But you seem to bring up MacDonald not so much to refute him but to prove that you are not ignorant of anti-Semitism and are open-minded enough to entertain arguments from the Grand Poobah of the field.

But this isn’t the real reason why you resist anti-Semitism, is it? It is because many of its proponents are obsessed with it, and you don’t want to be like them.

But here is a question: What if you missed something in MacDonald’s analysis that would shake your skepticism a little bit? What if you start to find yourself swayed somewhat, not just by MacDonald’s individual points, but by his general argument about the Jews? Would that make it any harder to resist anti-Semitism? I kind of doubt it. This resistance you have seems more tribal than intellectual. Not that this isn’t understandable, of course. Given how utterly vicious and single-minded some anti-Semites can be, I can’t say I blame you.

But the question I’m begging to ask you now is this: Is it possible to be completely swayed by all of MacDonald’s arguments and still not be an anti-Semite as you describe it? I think this is a fair question, since you yourself do not require acceptance or rejection of MacDonald in the calculus which leads you to reject anti-Semitism. Logically, it seems you view MacDonald’s ideas and anti-Semitism as two separate creeds arrived at along different avenues (reasoned analysis on the one hand, and obsession on the other). To simplify the question: can one be counter-Semitic and not anti-Semitic?

Here’s the quote from you which I found most revealing:

Well, I have read Kevin McDonald. I think he makes an excellent case against Boasian anthropology, Freudian psychoanalysis, and Frankfurt School critical theory. In fact, his arguments against these intellectual movements should be required reading for anyone trying to understand how things went so terribly wrong in the West. Further, there is no disputing his observation that these movements were dominated by Jews. In fact, all of the monstrous ideologies of the last era had an over representation of Jews.

Well, not so fast. Why not Right-wing political and cultural movements? Why does it always have to be Left-wing political and cultural movements with the Jews? If Jewish dominance in all the fields MacDonald discusses in Culture of Critique were attributable to the reasons you ascribe, then eighty years ago there would have been nothing stopping the Jewish Madison Grant and his school of thought from taking on Franz Boas, or the Jewish Martin Heidegger and his academic minions jousting with the Frankfurt School. If it were all about aptitude and living in cities, as you say, then why has there never been Left-Right balance among the diaspora Jews and their works?

I think you might have anticipated this question since you included the caveat “not explicitly anti-Semitic,” as in, “Every intellectual movement since Jewish emancipation, that was not explicitly anti-Semitic, saw an over representation of Jews.” Ah, but this kind of puts the cart before the horse, doesn’t it? This implies that anti-Semitism came out of nowhere, as if in the late nineteenth-century Jews flooded all academic and professional fields except for the one that was dominated by people who were already anti-Semites. This ignores the possibility that the so-called anti-Semite got that way in large part after being exposed to the unswerving Leftism of the Jews. It’s not like Henry Ford and Samuel Adams complained all the time about how Right-wing and patriotic those darn Jews were, right? I know, I know. Chicken and the egg. But as soon as you let go of the idea that anti-Semitism sprang out of nothing, you’ll realize that something is going on here. It’s under the surface and it makes only slight ripples, but it’s there and it’s powerful. And if you are a race-realist, then you can’t rule out biological causes. Kevin MacDonald offers a biological (well, evolutionary) cause. It may not be absolutely correct, but what theory is? Regardless, like Darwinian evolution, it remains the best scientific theory we have concerning this phenomenon.

Your idea that anti-Semitism has deterred Jews from entering certain fields in the past also does not hold up to historical scrutiny. According to Aleksandr Solzhenitsyn in his 200 Years Together [4], Jews in Czarist Russia faced all sorts of pressure from the government to stop exploiting peasants through usury and the sale of alcohol. Many Jews still consider such pressure to be anti-Semitic in nature: they had to live in the Pale, there were places they couldn’t go, they lacked certain rights, and so on. Yet did this stop them from lending money and selling alcohol to the uneducated masses of Russia? Did this stop them from being good at such activities?

Further, when the Soviets began to push the Jews out of positions of power and influence in the late 1940s, one of the thought-crimes of which they were accused was Zionism. Zionism was a big no-no in the Soviet Union for a long while. Yet did that stop the Jews from being Zionists in their hearts? Did that stop Jewish authors from producing Zionist samizdat literature?

If you’re good at something and you really want to do it, nothing short of slavery or violent oppression is going to stop you. That’s what history has shown. So your assumption that, upon emancipation, many Jews would have become conservative, race-realist scholars flooding the fields of craniology and criminal anthropology and eugenics if not for the anti-Jewish attitudes of the small number of men already active in those fields back then is basically weak tea. You say MacDonald is not terribly convincing, but frankly, your stated reasons for that are not terribly convincing, either.

No, diaspora Jews didn’t enter those fields because they weren’t into it, plain and simple. With their innate Left-wing sympathies, along with their intelligence and energy (or, in some cases, it must be said, cunning and malice), they crashed fields which were easily politicized (like the press), they politicized fields which shouldn’t be politicized (like anthropology), and they invented fields which they could then politicize (like psychology). Or they just went into politics to promote one of the many forms of socialism and to oppose the racial interests of white people. And the vast majority of Jews who didn’t do these things at the same time did very little to rock this boat. That is how it was 150 years ago, and it’s how it is now, from Europe to South Africa to South America to the United States, with little deviation. And if you ask Jews why this is, they will basically fart in your general direction [5] and tell you that after thousands of years of suffering, Jews have become so moral and high-minded and concerned about social justice that they would never be associated with conservative meanie-pants like Cyril Burt or Cesare Lombroso, despite what the data says. But, please, don’t take my word for it. Take their word for it. From the Jewish Journal [6], September 2016:

As Jews we are commanded each year at the Passover to feel as if we were in Egypt as slaves. As slaves who were part of a liberation movement, we identify and support the cause of the oppressed . . .

Jews will always agitate for and support causes of the Left, because we are commanded to be a beacon unto others and to see social activism and seeking Justice, Tikkun Olam and Tzedaka, as part of the Jewish DNA. We are chosen to do so.

“Jewish DNA,” huh? My, that sounds pretty elitist. Racist, almost. Kevin MacDonald, of course, tells a different story, and I would be delighted if you would reconsider him based on some of the points I’ve made in this letter.

But your aversion to anti-Semitism, or, really, obsessive anti-Semitism, I hope you never change. It’s good that you’re not going there. I often view anti-Semitism to be a lot like Tolkien’s ring. It’s very powerful and very useful, but if you resort to it too often, it eats away at your soul from the inside. I’ve seen this happen and I feel the pull from counter-Semitism into anti-Semitism myself. People do end up losing perspective and “tasting Jews in their sandwich,” as you say. Bald anti-Semitism invites one to get lost in the swamp of hate, which is not good for you, makes you unpersuasive, and limits the chances of a peaceful resolution to our current troubles.

Yet, it’s not like the anti-Semite doesn’t have his reasons for wanting to drain the swamp to begin with. With untrammeled immigration threatening to destroy Europe and America, and with Jewish elites helping to enable this (with the mainstream of their people cheering them on), the stakes are higher than they have ever been – and they have always been high. Kevin MacDonald and Aleksandr Solzhenitsyn have shown us this much at least, and neither of these men are like the anti-Semites you characterize. MacDonald always maintains a scholarly discipline in his writings and appearances. And Solzhenitsyn often expressed tenderness and respect for Jews. Yet their two great works, Culture of Critique and 200 Years Together, are bedrocks of counter-Semitism.

You danced around this dichotomy in your “Letter to the Antisemites” but never addressed it directly. And that’s too bad, because this dichotomy is one reason why the Jewish Question is such a fascinating topic. And I’d be lying if I told you it will be easy to answer.

I hope to hear more from you on this issue.

Spencer J. Quinn is a frequent contributor to Counter-Currents and the author of the novel White Like You [7].