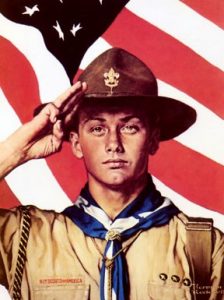 Even in European colonial societies, where different European stocks have blended together, we do not have generic white people. If that were true, there would be no differences between Americans and Canadians. But there are differences, and these differences are ethnic, even though both countries have similar origins, similar histories, similar institutions, and developed on the same continent, right next door to one another. Americans, Canadians, Australians, Quebecois, New Zealanders, etc. are all distinct white ethnic groups.

What is the message of White Nationalists who take up the banner of true American nationalism? Basically, it is the same message as White Nationalists everywhere: Race is real, ethnicity is real, and racial and ethnic diversity within the same country is not a strength but a weakness: a source of alienation, friction, inefficiency, cultural debasement, long-simmering resentments, and even hatred and violence. Therefore, the best way to ensure peace between different ethnic groups, as well as to afford them maximum latitude for independent development, is to create sovereign homelands for all peoples who desire to control their own destinies. Since Americans are a distinct white ethnicity, American nationalism means turning America into a homogeneously white homeland.

The inevitable objection to American Nationalism is that America is not a white society with a common culture but a multiracial, multicultural society unified not by common blood, or by a common culture, but by a commitment to a civic creed — a central principle of which is the proposition that “All men are created equal” — as well as the “American dream” of ever-rising material standards of living. This is the “civic” as opposed to “racial/ethnic” version of American nationalism.

There is no question that most Americans today believe in the civic nationalist conception of American identity. But they’ve simply been fooled. As I have argued in my essay, “Is White Nationalism Un-American? [2],” American civic nationalism is a fundamentally false interpretation of American history and identity that has been imposed upon the American mind by comprehensive propaganda in education and the mass media.

America was not founded as a society “dedicated to the proposition” that “all men are created equal.” The phrase “all men are created equal” is found in the Declaration of Independence, which is not a legal document of the United States. The phrase is simply a denial of hereditary kingship and aristocracy, not a blanket claim that all men — and especially all races — are equal.

The Preamble to the US Constitution specifies its aims:

We the People of the United States, in Order to form a more perfect Union, establish Justice, insure domestic Tranquility, provide for the common defence, promote the general Welfare, and secure the Blessings of Liberty to ourselves and our Posterity, do ordain and establish this Constitution for the United States of America.

Note that there is nothing about promoting the “proposition” that all men are created equal, or any propositions at all for that matter. Instead, the purpose of the US government is to promote concrete social goods: justice, domestic and international security, the common good, and liberty.

The claim that the United States was founded in 1776 to promote universal human equality comes from Lincoln’s Gettysburg Address, another piece of high-minded rhetorical flummery which is not a legal document of the United States either.

The United States did not allow blacks to become citizens until 1868. Blacks from other parts of the Americas could become citizens only after 1870. American Indians who did not live on reservations could become citizens in 1868. Citizenship was granted to all American Indians only by the Indian Citizenship Act of 1924. Chinese immigration began in the 1840s but was banned from 1882 to 1943, and Chinese born in America were not considered citizens until 1898. Only in 1940 was naturalization opened to people of Chinese, Philippine, and East Indian descent, as well as Indians and mestizos from other parts of the Americas. But each extension of citizenship to non-whites was fiercely resisted. Moreover, until 1965, American immigration laws were designed to maintain a white supermajority with an ethnic balance based on the 1890 census.

But even after America’s white supremacist immigration laws were scrapped in 1965, America still remained a culturally and normatively white society. For people around the world, an American simply means a white person. Hence the necessity of phrases like African-America and Asian-American. This is why I have always opposed white Americans calling themselves “European-Americans,” because the phrase is as redundant as “feline lion” or “canine mastiff.” Beyond that, calling ourselves European-Americans implicitly abandons the normative whiteness of American identity and puts us on the same level as non-whites, who are Americans only in a legal sense of the word.

When America’s white founders created the Constitution to bequeath good government to their white posterity — and when they specified that the only foreigners who could become American citizens were free white people of good character — they were declaring that a free and orderly white society is every American’s birthright.

But this birthright was stolen from us. Three principal forces were responsible for the undoing of white America:

The goal of American White Nationalism is to restore the free white nation that is our birthright.

American White Nationalism is far more likely to win the battle for a white homeland than anti-American forms of White Nationalism. The white Americans who lean toward white identity politics, even implicitly, overwhelmingly vote for the Republican Party. They also tend to be conservative and patriotic. They identify with America and feel a strong attachment to American symbols.

Like everyone else in our society, they have been miseducated about America’s nature and history and think it was founded as a color-blind propositional nation.

But they are also increasingly aware of the catastrophic consequences of diversity. Thus as white demographic displacement accelerates, these Americans will become increasingly receptive to our account of America’s real identity, how our country has been hijacked by hostile aliens, and how we can Make America White Again.

By contrast, anti-American White Nationalists will have to convince our people of all the same facts about race, diversity, and demographic displacement. But, as if that were not already enough of an uphill battle, they will also have to sell Americans a raft of anti-American ideas: cranky conspiracy theories about Freemasons, Southern Nationalism, and the like. The anti-Americans will also have to convince Americans of a whole host of historical revisionist theses about the Civil War, the Third Reich, and the Holocaust, none of them really necessary for white survival in America. Finally, the anti-Americans will have to explain away their use of symbols which are at best alien to Americans and at worst are freighted with highly negative connotations.