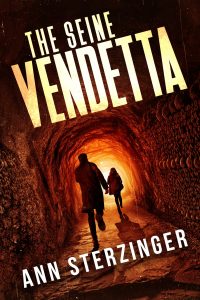 April on the Seine is lovely. But revenge is a dish best served cold. And the forecast for Paris is a deep freeze.

As the scion of a famous detective, I’ve had an off again, on again interest in the whole gentleman detective genre. Of course, you Americans have your own, rather more rough and tumble version, with its “hard boiled” and noir variations, as well as the more recent vogue for rogue mercenary anti-heroes.

In the same way, Ann Sterzinger is as different as possible from the nice Christian lady who chronicled my ancestor’s genteel adventures. Having already scored with the first volume in her multi-part sci/fi epic Elektra’s Revenge,[1] [3] Sterzinger now turns her miserablist but by no means miserable talents to another genre, this time setting her sights not on the boys of sci/fi but the crusty and not at all benign old bums of two-fisted revenge pulp.[2] [4]

The publisher – always a reliable bunch of blokes, eh? – says this:

After drunkenly murdering two of her husband’s assailants, an unexpected source – one of my fellow Brits, obviously a trustworthy chap – gives her the chance to finish the job with immunity, as long as she undertakes another slight task along with it; needless to say, things do not go as planned, or turn out to be as they seem.[3] [5]

To kill a killer, she had to go to the suburbs. La banlieue. Her former home, in the city of Saint-Denis, where once the Kings of France had buried their dead in a Gothic cathedral. The Basilique Saint-Denis was still there; in fact, the worse the town of Saint-Denis became, the more the government did to clean and pretty up the cathedral… while syringes and trash blew about its feet in the mournful breeze.

As you can see, there’s a soupçon of alt-rightiness here; this is not the Paris of Proust, or Hemingway, or even Miles Davis; it’s filled with Third World death-cult diversity. Of course, the great pulp killers, from Bulldog Drummond to Paul Kersey, have always cast a cold eye on the lower orders and lesser breeds, and Sterzinger the author also wants to shake things up a bit, making the dead husband a Jew and the lead thug actually the radicalized scion of a distinguished French/Algerian family.[4] [6]

Revenge is a typical, perhaps essential, motive in noir, but never more so than in the work of Mickey Spillane. Revenge as a motive for climbing out of the gutter – trading the bottle for a 9MM rather than an AA meeting – definitely calls to mind Spillane’s The Girl Hunters,[5] [7] while as in Kiss Me Deadly,[6] [8] opportunity for revenge takes the form of helping – or seeming to help – the government look for a deadly whatsit[7] [9] that isn’t what it seems, culminating in an implausible but satisfying aquatic/atomic conclusion [10] (the Seine this time, not the Pacific). Sterzinger even employs Spillane’s favorite format, the novelette,[8] [11] and her heroine swills Mickey’s favorite beverage, beer, not wine.[9] [12]

On the other hand, the American out of his element and twisted in the hands of British agents recalls The Third Man, with the catacombs of Paris standing in for the Viennese sewers.

She ignored most of what he said. “You’re in the Catacombs? You mean the old quarries under the city full of dead people?”

“One and the same.” She could hear him grinning.

“I’m not superstitious,” she said, “but taking a dirty bomb into a giant underground graveyard sounds like a really, really bad idea to me.”

Of course, being a well-known and well-regarded Francophile makes confronting noir inevitable – the French love it more than they do Le Jerry – and Sterzinger, as you can see from the quotes above, provides little history lessons as she shoves her very different American-in-Paris through an increasingly breakneck plot; I enjoyed them, but the Master (in this case, Spillane) would not approve – unless they involved the bloody ownership trail of a .45, or how he killed a bunch of Commies in Yugoslavia.

Sterzinger has again proven her ability to handle genre materials with style and originality. Highly recommended for anyone with a free afternoon, but it will leave you demanding more tales of adventure from the clear plastic knapsack of Lisa LaRoche.

[3] [17] For example, even LaRoche does not actually remember the murders, which for some reason don’t make the media either, so it’s possible the whole thing is a set-up; but then, one of Her Majesty’s servants would never be that underhanded, eh what?

[5] [19] Not to be confused with her previous book, The Girl Detectives, reviewed here [20], which is less noir and more along the dear, blessed Dorothy Sayers line.

[7] [23] “From the classic Mike Hammer film noir Kiss Me Deadly, it refers to a nebulous but potentially devastating threat that consumes a private detective or an entire nation. Much of its terror comes by way of implication. Examples include the communists of the 1950s, the One Ring and Weapons of Mass Destruction.” (The Urban Dictionary).

[8] [24] “Mickey often had more than one novel going – he would get “stuck” on one, and turn to another. Also, he loved doing beginnings and endings – and no one in the genre was ever better at either – but sometimes got bored in the middle. His favorite form was the 20,000-word novelette, and he spent almost a decade at the height of his fame writing them for low-end men’s magazines that paid him a pittance. His fertile imagination sometimes worked against him – he’d get a new idea, and set aside a manuscript to pursue it.” “Lady, Go Die!: A Behind The Scenes Look At Completing Mickey Spillane’s Lost ‘Mike Hammer’ Novels” by Max Allan Collins; May 7, 2012, here [25].

[9] [26] “People say,’ you have a beer, you’re a Jehovah’s Witness…but the Bible doesn’t proclaim against drinking, it proclaims against drunkenness…” “Interviewing Mickey Spillane,” here [27].