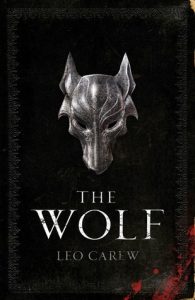 Fans of medieval fantasy and epic poems like Beowulf will enjoy The Wolf, Leo Carew’s debut novel and the first book in his Under the Northern Sky series.

In brief: When his father is killed in battle, 19-year-old Roper Kynortasson becomes the new ruler of the Black Kingdom – the realm of the Anakim, a northern race of warlike giants – and is tasked with uniting his people amid civil strife and the machinations of his rival, Uvoren, and defending the Kingdom against encroaching armies from the south.

This sort of story is familiar to readers of epic fantasy, but The Wolf is a worthy addition to the genre; the author has crafted a distinctive world and a gripping narrative, particularly when it comes to the fight scenes.

The tale of the founding of the Black Kingdom is recounted by the elderly warrior Skallagrim when some Anakim men set up camp at the site of an important battle that occurred several thousand years before. The Anakim originally hailed from Erebos, a continent resembling Europe, but the incursion of Sutherners (a race very different from the Anakim both in appearance and character) into Erebos forced the Anakim to flee their homeland and retreat to Albion, a land resembling an alternative Britain. This event became known as the Uprooting. The Sutherners followed them to Albion, and bloodshed ensued, culminating in the Battle of Harstathur. This resulted in a decisive Anakim victory that marked the end of the Uprooting and the founding of their Kingdom.

Anakim society is reminiscent of ancient Sparta. The Anakim are described as “the most warlike race in the world.” All Anakim boys are taken from their families and sent to special academies (haskoli), where they are instructed in the art of war from the age of 6. Courage and honor are prized above all, and the most prestigious award an Anakim can obtain is the Prize of Valor, awarded to those who display courage in battle. Cowardice is punishable by sticky fire.

Being a northern race, the Anakim thrive in the cold and eschew the heat. The Anakim equate warmth with being insulated and cocooned from the wild, a state they term fraskala, as opposed to maskunn, or exposure to the cold. The state of maskunn is also equated with rootedness and connection to the natural environment of their homeland. Carew began writing this book while living in a tent in the High Arctic and has an affinity for stark northern landscapes.

Because of their attachment to the land, the Anakim are fiercely loyal and patriotic, willing to fight for their Kingdom to the death. In one council meeting, Roper delivers a rousing injunction to defend the Kingdom against Suthern invaders:

This fortress and our brave warriors are here to defend that which the Sutherners destroy so contemptuously. They rape and enslave our women. They murder our peers and children. They raze to the ground trees that have stood for thousands of years, uproot our ancient villages and carry all they can find back to their gluttonous countrymen.

In contrast to the austere Anakim, the Sutherners are softer and more childlike. They love gold and luxury and are prone to material acquisitiveness and ostentation. They are inferior to the Anakim when it comes to martial ability, though they breed more and are more plentiful in number.

The Sutherners are led by Bellamus of Safinim, a shrewd commoner who worms his way into the upper echelons of power, entering into an affair with Queen Aramilla, and single-handedly stages the invasion of the Black Kingdom that sets the plot in motion. Bellamus is quite intelligent and finds himself fascinated with the Anakim. Having studied their customs, language, law, history, and so on, he is an expert on Anakim affairs. Yet there is a chasm between the two races that cannot be bridged, and the Anakim remain an enigma to him.

The mightiest warrior among the Sutherners is an Anakim-Sutherner hybrid by the name of Garrett Eofen-Draefend. Knowing he would be an outsider among Anakim, Garrett allied himself with the Sutherners. Something of a “tragic mulatto” figure, he has a burning hatred of the Anakim and is intent on their destruction. Hybrids are said to be psychologically unstable and are also infertile and prone to sickness.

Women have a modicum of influence: Anakim historians (those entrusted with safeguarding ancient memories) are women, and Roper’s outspoken wife sometimes chimes in during political discussions. But warfare and political leadership are strictly male domains in Anakim society.

Carew has already been hailed as the next George R. R. Martin, but he reminds me more of someone like Joe Abercrombie. There is a greater emphasis on storytelling and action over worldbuilding, and the lore lacks the depth and intricacy of A Song of Ice and Fire or The Lord of the Rings. This is not a flaw in itself, but one is sometimes left wanting to know more about Anakim history and culture. (Anakim religion, for instance, is not discussed beyond a passing mention of “the Almighty.”)

The best thing about this book is the battle scenes. The battles are meticulously choreographed and are described in gritty, visceral detail. Carew masterfully captures the exhilarating heat of warfare. Military tactics and weaponry are also described at length.

Carew’s intent was to explore what could have happened if different species of human were to live alongside each other in an alternative early medieval Britain. The vast array of cultural and biological differences between the Anakim and the Sutherners renders coexistence and mutual understanding impossible. On a smaller scale, the same applies to different subgroups among modern humans. The clash between the Anakim and the Sutherners cannot help but bring to mind the foreign invasion of Europe currently taking place. It also illustrates the contrast between the martial ethos characteristic of heroes of old versus the bourgeois mentality that characterizes modernity.

Considering that its author is only 26, this is a very promising debut. The book’s ending sets the stage for a sequel, with Roper proposing to invade Suthdal and expel the Sutherners from Albion. This reviewer looks forward to the next installment.