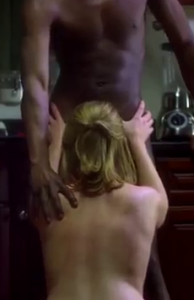 Shortly after publishing the article discussing “The War Against Whites in Advertising [2],”I received a lot of comments, messages, and social media posts – the support for the article was tremendous, thank you. One message we received was in regards to the “Banned German oral sex Sprite commercial.” The reader wrote us and asked us to look into the commercial. What I found was far more interesting than even the reader might have known. The video is below. It depicts a white, blonde woman on her knees in front of a black man, and we hear her thinking, “I could really go for a Sprite right now” as she performs oral sex on him, and at the end she has Sprite foam sprayed all over her face while she thinks, “I love Sprite!”

The first thing I found when researching this one was that the advertisement was not one that the Coca-Cola Company (which own Sprite) ran in Germany or elsewhere. The commercial was, in fact, a speculative advertisement, or “spec ad [3].”

Spec ads are independently-produced advertisements that have not been commissioned or requested by a company. They are a way for those working in the advertising industry to boost their portfolio or win contracts with prospective employers by showcasing their skills. Spec ads are the equivalent of a “writing sample” in some ways, but can serve as a way to shift advertising trends while pushing social norms. Popular spec ads generate attention, and advertisers often take notice [4]. This particular spec ad hit over a million views within days after first being published online, and has since been viewed millions more times as it has been re-uploaded and shared on social media and Websites.

The ad being “fake” is one thing which I immediately found interesting, but this goes much deeper into the woods. The Huffington Post article that discussed the ad mentioned that the name of the producer and director was Max Isaacson . . . Isaacson? Interesting last name. I searched for the name on Twitter and found an account matching that name, listing a Website in its bio section. The Website is for BroSis Pictures, and provides a short bio [5] of Max:

He took that incredible eye for visuals, and moved into the director’s chair, shooting a number of music videos, and commercials for campaigns such as HBO’s True Blood, as well as an unlicensed “Banned German Sprite Ad” which became a huge viral hit, breaking 1.2 million views in two days. 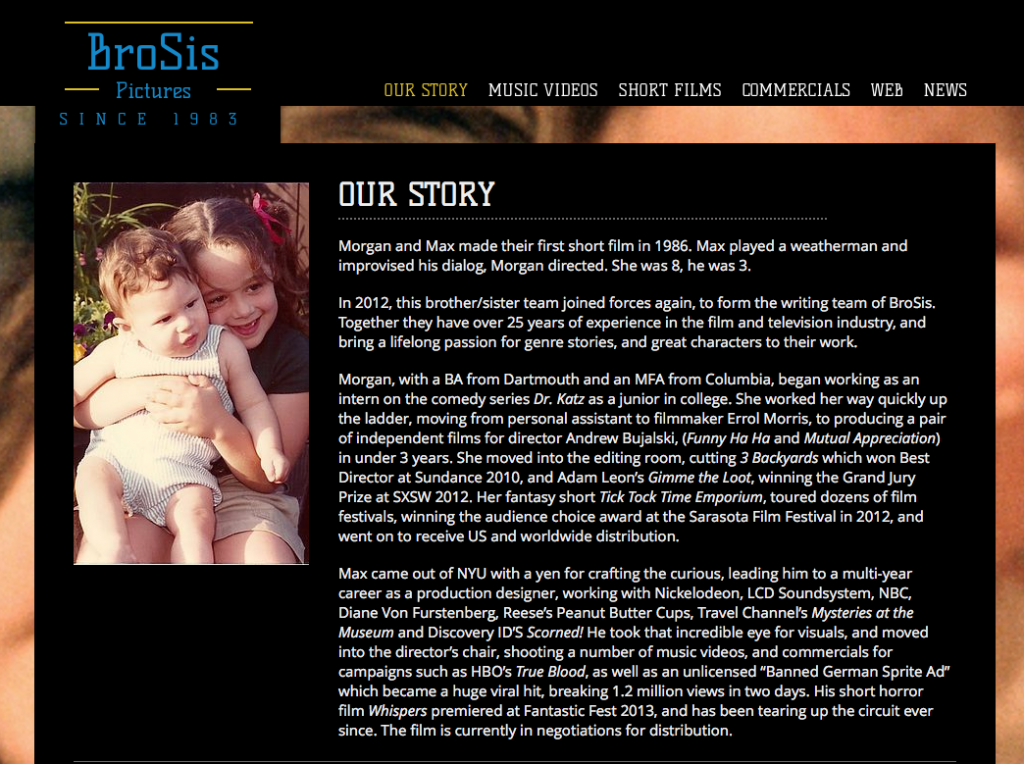 Max Isaacson’s Twitter account links to the site, confirming that I had the correct Max Isaacson. I quickly searched through his posts, assuming I might confirm my conceit that there was a noticeable Jewish influence in race-mixing propaganda, which I discussed in my previous article, in the “Purveyors” section. Here is what I found:

School Ties was the first movie to make me proud of hiding my Jewish heritage.

I tried to imagine what a Black Panther style culturally relevant superhero movie for Jews would be, then I realized they already made A Serious Man. pic.twitter.com/XRhZ2zdZBi [8]

In many ways it’s far from the experience the Jewish side of my family had, but good gravy did I see this kind of life surround me in the community. 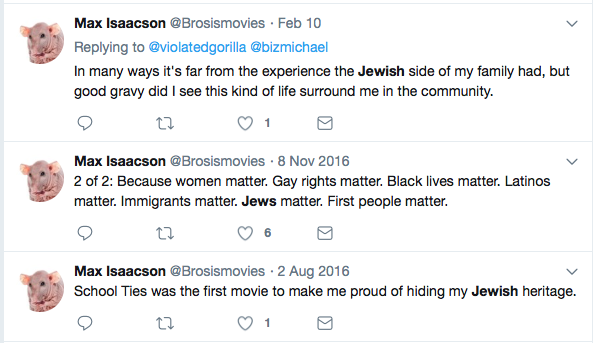 The ad was not created or paid for by Sprite, nor was it even created in Germany. Instead it was financed and directed independently by Max Isaacson, a New York Jew. The significance of this cannot be overstated. There was no financial incentive. Nobody requested that this commercial be produced. It is not as if Sprite had this idea, and that Max was merely the person who brought their vision to fruition. The entire project, from start to finish, was a Jewish expression of ethnic hatred towards whites, again using blacks as their pets, to send a message – in German, no less. The commercial was “fake” only in the sense that it was not produced or endorsed by Sprite. Its message, however, was very real. 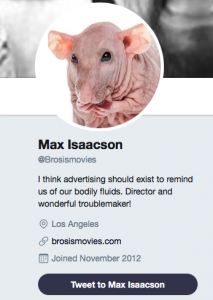 How fitting that Max uses a rat as his Twitter profile photo. I have little doubt that if rats could communicate with us, they would be deeply offended by being associated with such vermin.

It’s Not About the Money

There is a legitimate argument to be made pertaining to media companies using “diversity” in advertising and other content: It is that the free market dictates everything, from the ethnic makeup of ads to the political themes in films. On its face, this idea seems plausible. After all, companies exist to sell products and services, and it logically follows that any action taken by companies should be carried out as part of an effort to maximize sales and profits. This outlook, although reasonable, is myopic and lacks several key factors in its analysis: Primarily that the goals of individuals within organizations, and the stated goals of these organizations themselves, are not always what they seem.

Mainstream news organizations do not exist to uncover and disseminate the truth; they exist as the propaganda wing of the international Left. This should not be a controversial statement by any means. If one was not already aware of the lying and manipulative nature of the press, the 2016 election coverage should have been sufficient for nearly everyone to have noticed its incredible bias. CNN, for example, is negative towards President Trump ninety-three percent of the time, and their ratings continue to drop [14]. Taken together, the primary US news sources, including FOX, average eighty percent negative coverage of Trump [15], in a country where half of the voters supported Trump, at least as a rejection of Clinton.

If gaining viewers and making money were the highest priorities for these news organizations, would they be so openly biased? And so openly engaging in political activism that they must know would alienate half of their potential viewers? To them, it’s not about the money. Sure, the money is necessary, certainly a goal somewhere, but they have clearly demonstrated that they will sacrifice profits in order to shape a narrative, control the flow of information, and warp political discourse. It is also necessary to note that a mere six corporations control ninety percent of the media in America. Television stations, radio stations, newspapers, films, social media, video games, comic books – virtually all media produced [16] is filtered through the small, international clique of the media conglomerates.

Marvel comic book sales have also been declining following an effort to introduce “diversity” into their character line-up. These new characters include females and black teens, as well as biracial and Muslim heroes. The move towards a more “diverse” comic book industry was not a reaction to demands from the fans, but was the result of the efforts of organizations such as Women in Comics Collective International [17], an organization that promotes women and non-whites in the comic book industry.

When asked about declining sales, Marvel VP David Gabriel said, “What we heard was that people didn’t want any more diversity.” The feedback from fans [18] was clear: They were alienating their core demographic and abandoning classic characters to make way for their new, “diverse” iterations. Gabriel’s honest comments sparked outrage and were called a “public relations nightmare for Marvel’s diversity initiative.” Gabriel then, of course, “clarified” his comments [19] and backstepped a bit, but the statement was already made, and it coincides with the evidence of sales numbers and readership demographics.

This past summer saw the lowest number of summer ticket sales Hollywood has seen in the past twenty-five years. As one article [20] on this put it, “What is clear: This summer was marred with multiple high-profile films that flopped stateside, including The Mummy, Baywatch, The Dark Tower, and King Arthur: Legend of the Sword.” 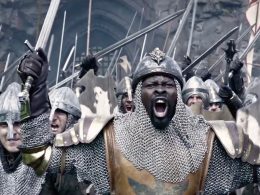 The NFL has lost twenty to twenty-five percent of its viewers [22] over the past two years. Despite widespread opposition to the players who were kneeling during the national anthem, as well as declining viewers and ticket sales, the League continued on. Nike, Under Amour, and Ford all expressed support [23] for the NFL players’ “protest” and freedom of expression.

People tune in to sporting events, read comic books, watch TV, and go to the cinema to be entertained, not to be lectured, derided, and thrust into the political arena. If it was simply about the money, CNN, Hollywood, Marvel, the NFL, and all those others who are currently experiencing losses due to their political meanderings would surely alter course to mitigate further damages. The “free market,” in a sense, has spoken. The argument is correct in that manner. However, what some fail to understand is that companies are not always responsive to free-market demands for several reasons. Many are simply in positions where their customer base can decline, and they can still make enough money. Others simply decide that the utility of political activism – be it taking a knee, or promoting miscegenation – is more valuable than high profits. The hostile elite in positions to make those decisions might have such a deep-seated and atavistic ethnic hatred for us that they will gleefully lose money in the short term if it helps to usher in our long-term demise as a civilization. No matter what is really the case, one thing is clear: It’s not about the money, it’s about sending a message.

The Other Side of the Coin

In my previous article, I wrote about the incessant use of interracial couples in advertising, particularly the depiction of white women with black men as the most common. Recently it occurred to me that there are indeed times when white women, white couples, and white children are used in propaganda without any hint of miscegenation or mongrelization. In a very subtle, yet sinister, ploy, white people are often used in a culturally and psychologically damaging way. When the press wants to tell us to stay single, not have children, and fight “overpopulation,” they direct the message solely to a white audience.

There are several articles that make this point perfectly clear. To cite only two examples, according to NBC News [24], “[s]cience proves kids are bad for Earth. Morality suggests we stop having them.” 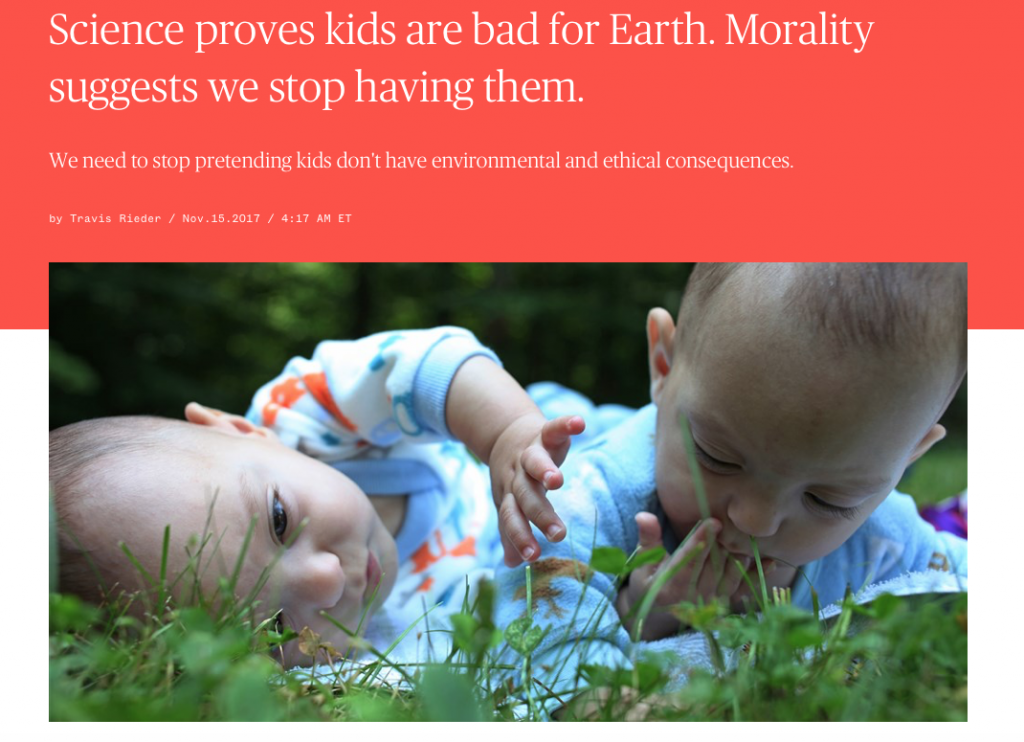 And The Guardian says [26], “Want to fight climate change? Have fewer children.” 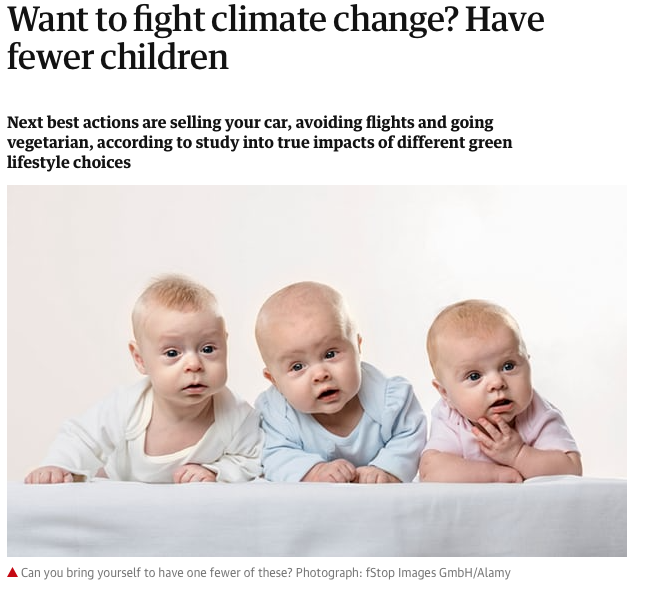 These articles argue that extra people on Earth contribute to climate change; therefore to fight climate change, we must not have so many kids. The photos they use are all of white children. This is very curious considering global pollution, fertility trends, and population projections. In light of the data, the photos should depict only non-white children. After all, they are worried about overpopulation [28], right? 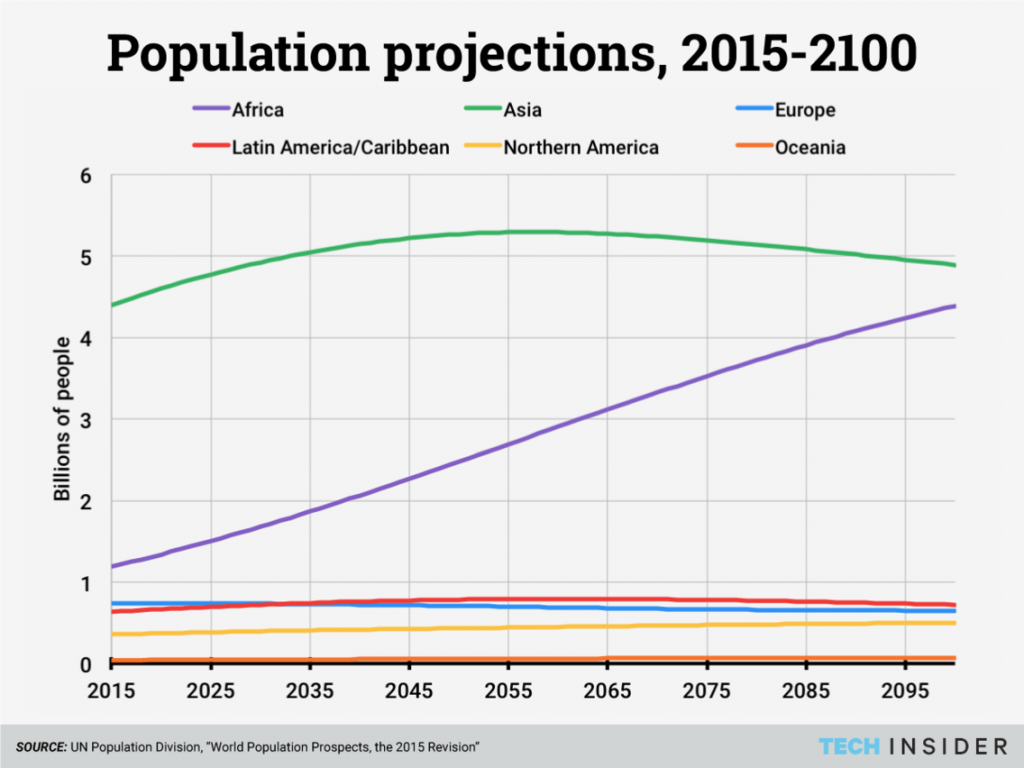 In articles that discuss the “science” of happiness, urging people to stay single, or not to have kids, suddenly “diversity and inclusion” are no longer of any concern. The only time white women are seen without black men in the media appears to be when the articles are telling women to remain single and childless – a rather unsettling discovery, as can be seen in three examples, here [30], here [31], and here [32]. 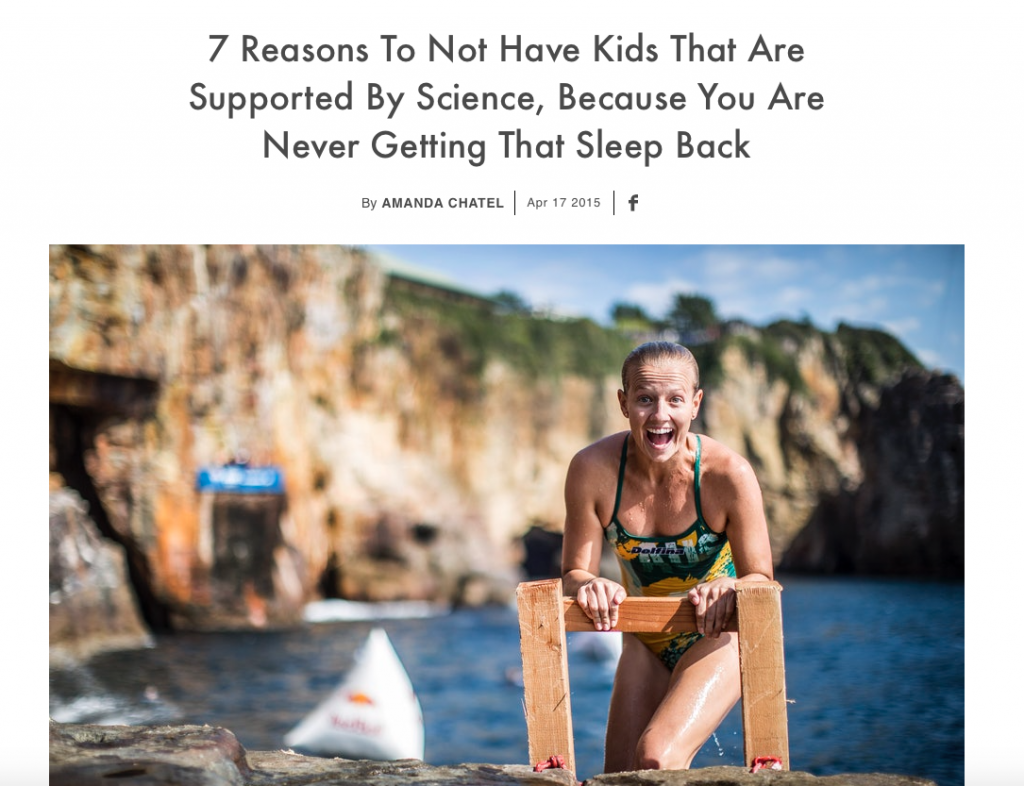 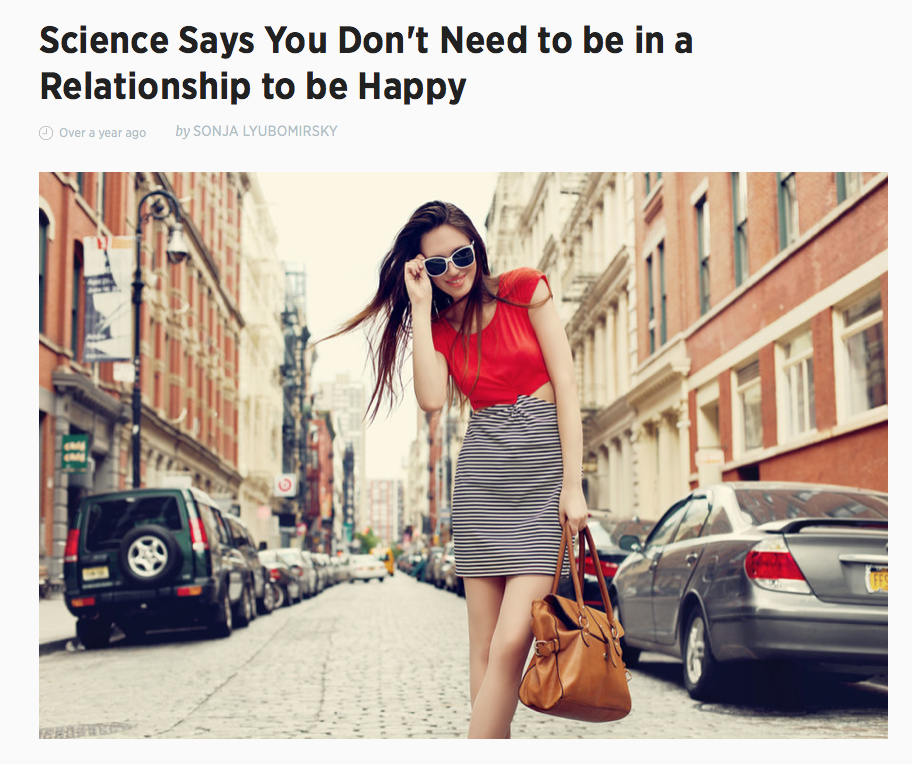 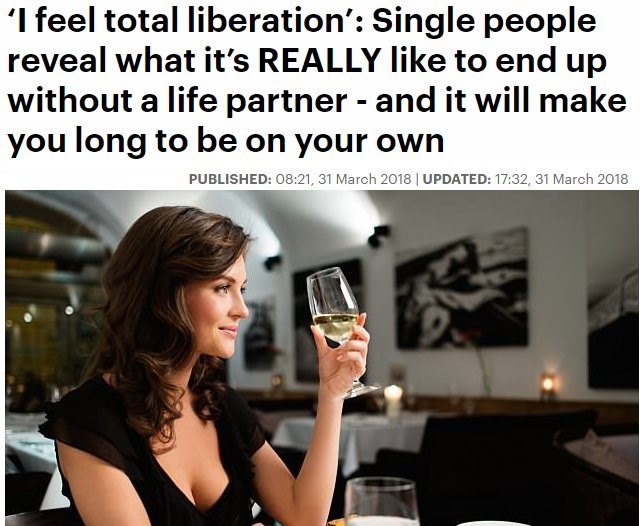 When a nice white couple is depicted in the media, this is how: without children. On one side of the coin, the enemies of our civilization promote constant dysgenics and social chaos through race-mixing, and on the other, they encourage white Europeans to spend time alone – atomized, deracinated, and childless. This is propaganda with the sole intent of creating a world without us. 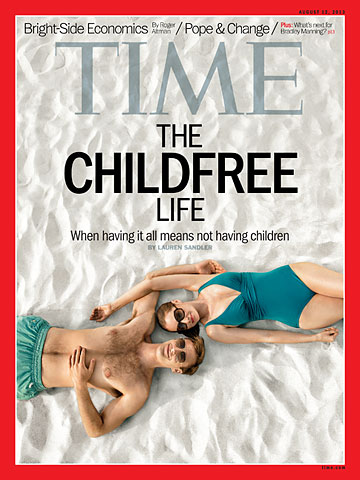