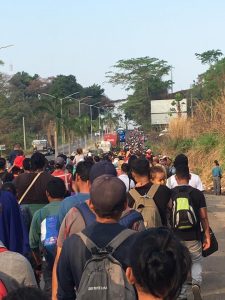 Why is a caravan of 1,500 Central American families headed toward the U.S.-Mexico border? You will search the mainstream media in vain for this news – so far only Fox, Breitbart [2], the Daily Mail, and something called the Canada Free Press have reported the story. As best as I can determine, CNN, MSNBC, the “big three” networks, and the major papers have said little or nothing at all.

The caravan began on March 25 in the Mexican state of Chiapis, which borders Guatemala. It is expected to reach Tijuana within a month. There, these economic migrants are expected to claim that they are refugees, and to request entry into the U.S. Many are the unanswered questions (as Pat Buchanan might put it). For example, is it 1,500 families or 1,500 individuals? The sources give conflicting accounts. The answer is probably 1,500 families – which means that we may be talking about at least 4,500 people, probably more.

The bigger question, however, is who is behind this? The caravan has been organized by something called “Pueblo Sin Fronteras.” For those of you who don’t read Spanish, that means “Village Without Borders.” You can visit their Facebook page here [3], where you will see that they have posted regular updates, including photos of happy brown peasants laughing, eating free food, and doing laundry in the streams along their route. I can find little information about Pueblo Sin Fronteras, which is interesting in itself. They are ostensibly a charitable organization, but I sense something bigger and darker behind them. How the U.S. government chooses to handle this situation will have enormous implications.

Just this week, Department of Homeland Security Secretary Kirstjen Nielsen was in border security negotiations with Mexican diplomats. Both parties have been all smiles, with press releases touting the meetings as a “success.” Yes, it’s now official: the Mexicans think we are complete idiots. For while these “successful” negotiations were underway, Mexican authorities have stepped aside and allowed the caravan to pass through their country unimpeded. There are two possible reasons for their inaction. The first is one we have known about for a long time: Mexico wants to get rid of these people by dumping them in the U.S. Since they are apparently even less capable than we are of securing their southern border, Mexico’s solution is a migrant freeway to the U.S. But there is another likely reason Mexican authorities have done nothing, and that is that they have been bought off by whatever wealthy and powerful individuals and organizations are behind Pueblo Sin Fronteras. (Some have suggested George Soros, and that is certainly plausible.)

The timing of all this is quite interesting. Since Donald Trump was elected, border crossings have been down, apparently because would-be illegal aliens have concluded that there is a change in the air, and that they are more likely to be caught and deported. One would think that most of the same people would also conclude that the chances of their receiving “refugee” status are pretty slim, so why bother? Well, somebody must have given them one hell of a pep talk, because thousands are now streaming here, apparently confident that they will be welcomed.

It is obvious that these migrants are being used, and that the entire operation is intended to test Trump’s stance on immigration. The expectation is that he will not pass the test. It’s one thing to advocate stopping the flow of illegal immigration. But it’s quite another to reject the huddled masses knocking at one’s door, presenting themselves as “refugees” and asking permission to enter. As far as the Left is concerned, they must think that they are in a win-win situation.

Of course, the Left wins big if Trump caves and allows the migrants in. For this caravan will be followed by another, and another. And once Trump lets 4,500 in, what basis does he have for refusing more? Even if he caves this once and says, “No more,” his position will have been weakened greatly. And it is already pretty weak. In May 2017, Breitbart reported [4] that the State Department agreed to nearly double its quota of refugees from 830 per week to 1,500. Interestingly, the same report stated, “It is unclear if the State Department made this upward adjustment with the knowledge and approval of President Trump.” Trump’s base is keeping an eye on things like this – and is still waiting for work to begin on the promised Wall. Should Trump cave, the morale of his base will plummet, and that means low Republican voter turnout in the midterms. Trump’s reward for caving, of course, will be accolades from the likes of Senator Schumer, who will declare that he has “grown” while in office.

On the other hand, the Left also thinks it wins if Trump refuses to allow the migrants in. We will then see weeks of coverage painting him as cruel and heartless. As betraying “what America is all about.” No doubt we will even be treated to a plethora of stories about the plight of individual migrants – how Pedro S. and his family are fleeing drug violence, how Juan J.’s children are malnourished, and so on. In other words, we will be subjected to a caravan of appeals to emotion. The objective is that Americans, heartstrings thoroughly plucked, will cry “Enough!” and return control of Congress to the Left in the midterm elections, and boot out the heartless Trump in 2020. The mainstream media’s apparent lack of interest in the migrant caravan might be because they want to bring the story to the public’s attention only when Trump has made his heartless move, when the story will have maximum impact.

Although getting the migrants into the country might seem to be the Left’s objective, I suspect they would be even more pleased to vilify Trump, should he refuse to allow them in. In short, this caravan of hopeful peasants are merely pawns in a cynical political game. No surprise there. It does, in fact, make me feel sorry for these people – who, after all, are seeking to escape conditions of unimaginable squalor. But I don’t feel so sorry that I am in any danger of losing my mind and concluding that all the world’s poor need to head to my country. According to one poll [5] from five years ago, approximately 140 million of the world’s “dreamers” would move to the U.S. if they had the chance. Of course, if that happened, we would no longer have a country. And since peoples bring their cultures with them, and invariably reconstitute and preserve only those cultural forms of which they are truly capable, in a few generations the U.S. would become largely indistinguishable from the shithole countries these people are escaping.

All eyes are now on President Trump. I’ve written elsewhere [6] of the anxiety the man causes me. He always keeps me in suspense. I am never quite sure where he stands, and whether I can count on him. At times Trump seems like the Heraclitean Flux: ever changing, ever flowing; you can’t step into the same Trump Train twice. Is he going to hang tough, or is he going to let us down? As I have argued, there is a lot at stake in this situation, which seems ripped straight from the pages of The Camp of the Saints.

So far so good: Trump has now tweeted

Mexico is doing very little, if not NOTHING, at stopping people from flowing into Mexico through their Southern Border, and then into the U.S. They laugh at our dumb immigration laws. They must stop the big drug and people flows, or I will stop their cash cow, NAFTA. NEED WALL!

That was on April 1, and hopefully he wasn’t fooling. Of course, we need more than economic threats should Mexico not change its ways: We need Trump to simply turn this caravan back at the border. Does he have the guts to do that? We will soon see.