The novel-memoirs of Louis-Ferdinand Céline have a peculiarly cinematic texture, like that of rough drafts for projected screenplays. He flashes sense-impressions and side-thoughts at the reader. For the neophyte, this can make for some hard going.

On the other hand, these impressionistic prose-sketches can provide a series of clear visuals for anyone attempting to hammer a Céline tale into a script. This is particularly true of his Exile Trilogy (aka «Triloge Allemande»), the three novel-memoirs written in the 1950s about Céline’s time in France, Germany, and Denmark in 1944–45, when he was on the run as a collaborateur, anti-Semite, anti-communist, and worse things.[1]

Alfred Hitchcock is said to have storyboarded his own films well before shooting anything, so that when he got around to key scenes he’d know exactly what the angles and lighting would be. Thus the peculiar Hitchcock “style,” which is nothing more than forward-planning in place of directorial improvisation. Céline’s prose-storyboarding provides something similar.

It’s not surprising to discover that Céline drafted outlines and treatments for screenplays throughout his career, or that he spent a long time trying to get his first novel, Voyage au bout de la nuit (Journey to the End of the Night), put on screen. He networked with agents, negotiated, traveled to Prague and Hollywood. For a little while Abel Gance (Napoleon), had a rights option, then a Hollywood screenwriter/agent did.

But in the end Céline gave the whole thing up in a huge bout of despair. This was partly because the strict new movie code of the Hays Office (1934) made a faithful adaptation unlikely, and partly because his longtime American girlfriend, Elizabeth Craig, had abandoned him.

Ironically Voyage/Journey was the most conventionally structured and “sellable” thing he ever wrote. After his Hollywood misadventure, Céline’s writing became progressively more idiosyncratic and impressionistic: scenes upon scenes for films that would never be shot.

No films, alas, but we now do have a 2015 “graphic novel,” La cavale du Dr. Destouches (approximately: Dr. Destouches on the Lam)[2] that makes brilliant use of that cinematic imagination. Cavale is a kind of director’s cut of the Exile Trilogy. Just much shorter and more intelligible, although not necessarily simpler. It’s an extraordinarily lush black-and-white production, in graphite/pencil drawings and ink lettering by Paul and Gaëtan Brizzi, brothers and sometime Disney animators. And yet it’s Céline, through and through.

Christophe Malavoy’s script for Cavale achieves what is seldom done well in film adaptations, and would be particularly difficult with these three books because of their jumble of flashbacks and flash-forwards: it gives an order to narrative, without amputating half the tale. Bits of dialogue, generally sardonic, are added throughout, but do not deface or upend the story; much as backgrounds and interiors are filled in with much more precision than the original text provides. The artists are particularly good with train stations and hotels, which is good because we spend a lot of time in them. 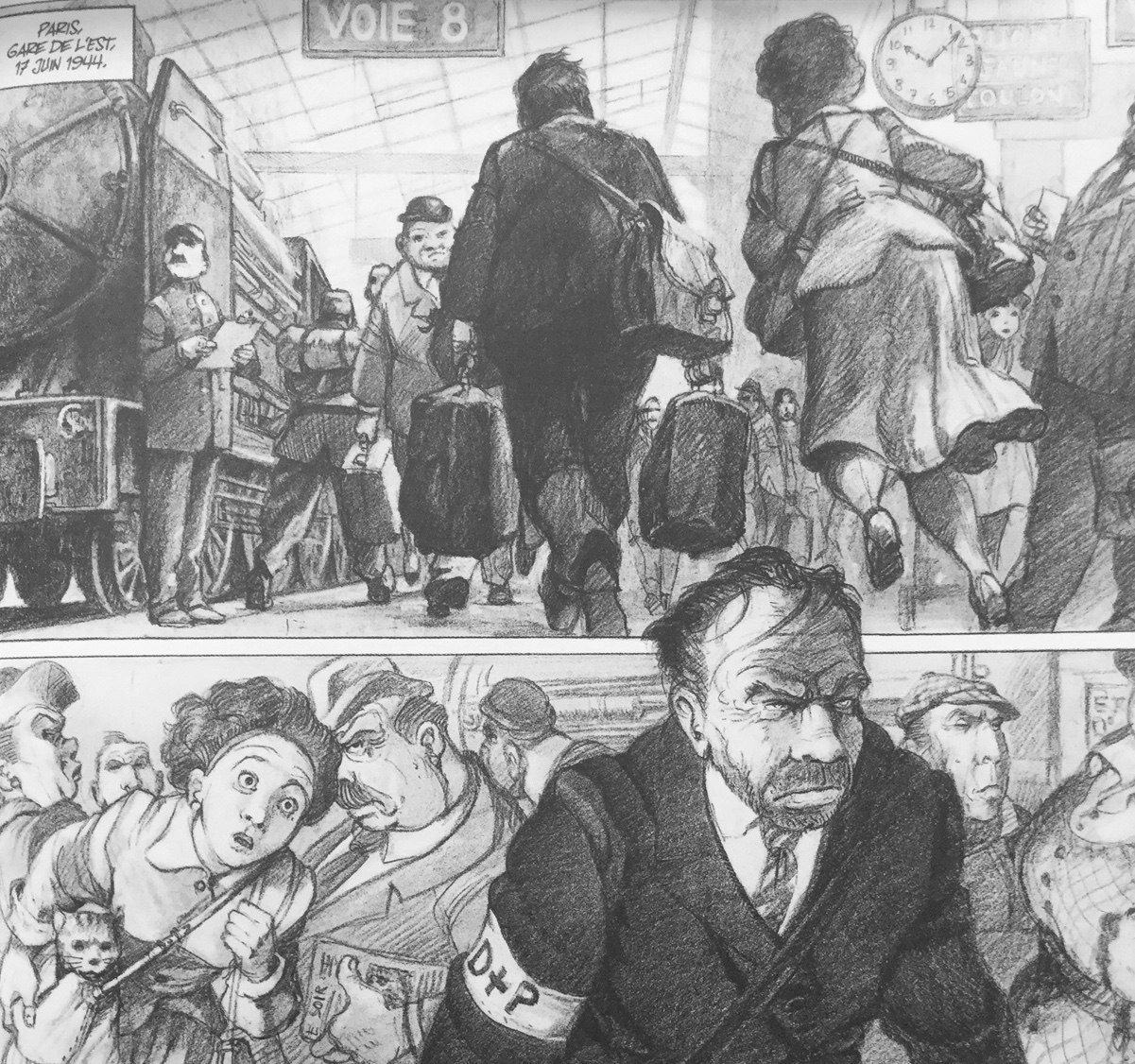 We begin with the last weeks before “Liberation,” when the skies are darkening. Somebody keeps mailing Dr. Destouches (Céline) poison-pen letters containing nothing but a drawing of a coffin. Céline and family obtain passports and entrain for Baden-Baden. A few weeks later, due to security measures after the Hitler assassination plot, they are bundled off to Sigmaringen, where the remnants of the Vichy government are housed. Céline is told he can now be Marshall Pétain’s physician, since the regular one just got arrested. Pétain looks up balefully from his dinner. “I’d much rather die right now.”

It’s a French publication, and unsurprisingly mostly in French—often of a highly idiomatic sort, or sometimes comically broken French, as when spoken by a German. And occasionally in English, as when our protagonist needs to talk to a Danish hotel clerk. But primarily and inevitably it’s visual. Whole pages go by with scarcely a word spoken. We follow Céline and his wife Lucette and their cat Bébert on their adventures through France, Germany, and Denmark, 1944–45.

Meanwhile—cutting back in Paris—we see the cast and crew of Les Enfants du Paradis squabbling among themselves about what’s going to happen to them when the Germans leave. They are mostly collaborateurs, of either the horizontale kind (Arletty, the actress who stars in this three-hour epic of 1830s theatrical Paris) or openly political.

Céline’s old buddy, the fascist actor Robert Le Vigan, sneers at Arletty: “At least I didn’t sleep with Germans!” And she answers: “No, you just turned everyone in to the Gestapo!”

Panicking just a bit too late, Le Vigan decides it’s time to flee. He phones Celine, and the concierge says the doctor has left town, who knows where? Le Vigan will keep coming back to the story like a bad penny. Just as he does in the Trilogy. Just as he did in Celine’s postwar life.[3] 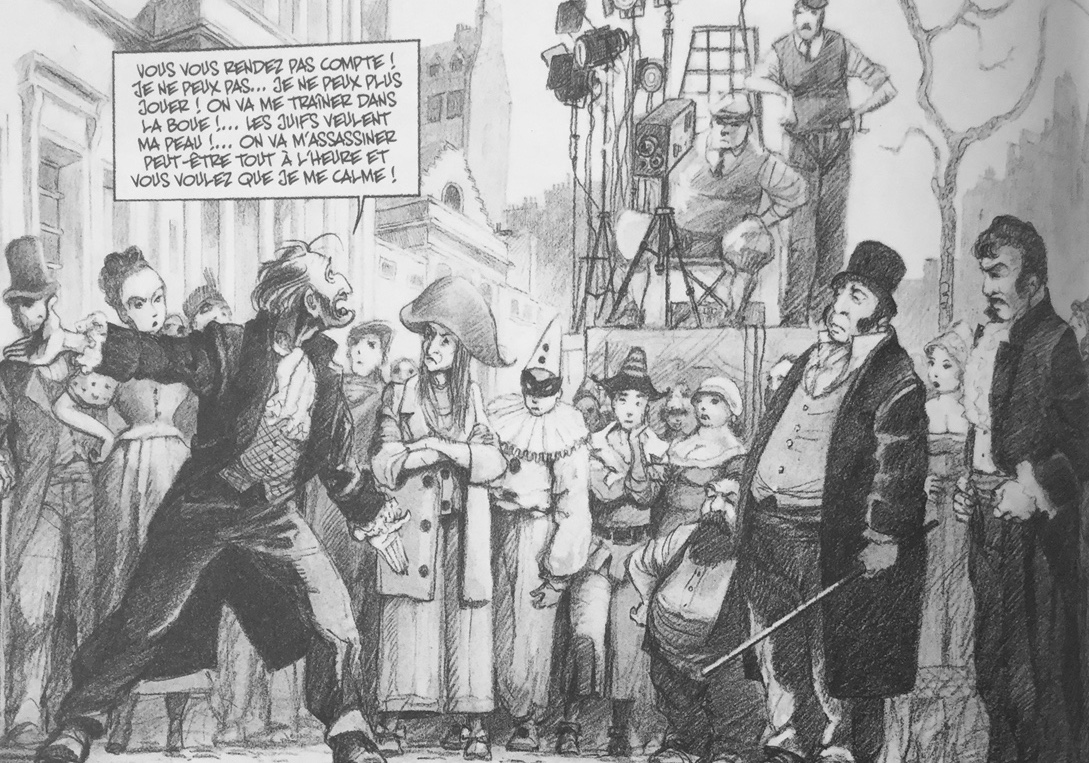 Panic on the set. (From La cavale du Dr. Destouches.)

That this anti-moralizing aspect of Céline has been faithfully reproduced in a graphic-novel format shows that the scriptwriter is not only extremely skillful. He actually gets Céline.Not the least of this book’s charms is that it captures the essential Punch-and-Judy nature of the war in Europe. In this and most other respects the book is thereby true to the original. Céline is usually said to be controversial because of his treatment of the Jewish Question, or because he consorted with collaborationists and Nazis. But I think his transgressions are deeper and more elusive. He did not think that war in Europe a great crusade for anyone. He rejected all its pieties, ridiculing Hitlerites, Bolsheviks, Jews, whatever. Even today it’s hard to find anyone who can discuss that time and place without putting it inside some Great Moral Lesson.

1. In order of publication 1957–69, the novels are Castle to Castle (D’un château l’autre), North (Nord), and Rigadoon (Rigodon), although the time-scheme skips back and forth among the narratives.

3. Le Vigan was essentially a non-person after Liberation. His scenes in this film were reshot with Pierre Renoir, brother of the film director, in his role. Le Vigan was sentenced to ten years in prison, was released after three.