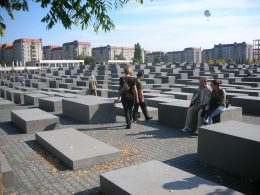 The Holocaust memorial in Berlin.

At regular intervals, the practiced television viewer can watch a presentation that runs approximately as follows: The Federal President delivers a historical sermon before the assembled parliamentarians in which he conjures up the spirits of the undead and announces a truth which everybody knows and all believe in. His silky, polished words produce the desired mood of collective “affectedness.” One instantly recognizes that the truth of a myth is being proclaimed. The ritualized proclamation presents no new or original text (its specific informational content must—on pain of general consternation—approach zero)—rather, a community of the faithful is being brought together in devotion. The content of the story being told is ever new and ever true; it can and must not ever be forgotten, but instead must always be told over and over again. The endless liturgical repetition of a story which is ever the same evokes its enduring timeliness. The first commandment states: thou shalt have no other holocausts before me! The ritual of overcoming the past has the traits of a true official religion.

The dogma is simple and clear: Our forefathers, the Nazis, brought the heaviest and most singular guilt in the world upon themselves, and thus excluded both themselves and their descendants from the paradise of historical normality. Their inexpressible but gladly retold crime amounted to a rebellion against the command of progress and humanity: they were either a fall back into barbarism or, even worse, historically incomparable—of the same quality as Adam’s fall. This original sin is now propagated from generation to generation; it has become hereditary and cannot and must not be forgotten or repressed. Thus, the nation of the Nazis has become a negatively chosen people. The greatness of their ancestors’ guilt has removed them forever from the normal path of history. In this guiltiness it is unique among the nations, since its crimes were of unique magnitude.

This rejected people still lives under the old covenant with history; no messiah has arisen who might grant salvation from its unforgiveable guilt. The drama therefore remains of Old Testament severity. Adam-Hitler is not replaced by any Jesus; any such Jesus would be quickly crucified, in any case. So the guilt remains total, uncompensated by any grace.

This people, loaded down with a guilt it can never cast off, which “may not dispose of its past,” now falls (as was to be expected) into the hands of priests. Their task is to exhort, to remind, to keep the myth awake. From the dogma derives a task, a mission: the total ethical proselytizing and sanctification of the world—which does not, indeed, cancel out the guilt, but can bring some relief. Through a combination of gnashing of teeth and goodness of heart, a new, depoliticized human type can be forged.

This new official religion rules almost uncontested. Its followers and missionaries are found in all political and social camps, from the center-Right through the center-Left all the way to anti-fascist terrorism. This ubiquity is a sign of its enormous vitality. But even here there are said to be covert free thinkers: these are the deniers, the suppressors, the relativizers—those who (in an unholy continuation of a process once known as “enlightenment”) chip away at the myth. But do they really exist? Or are not heretics in the end a mere invention of orthodoxy?

One day in the month of November, tried and tested for all sorts of acts of penance,[1] [3] heresy raised its head to unsuspected heights. A real, live Federal President was unmasked as a freethinker and was forced to resign his office, because he had confused two kinds of texts: instead of a sermon, he had delivered an academic lecture.[2] [4] It was as if a Minister had given a congregation in mourning—instead of a funeral sermon—a critical psychological profile of the deceased. It did not do justice to the seriousness of the occasion, nor did it fulfill his duties. In memory of this mistake, Penance and Prayer Day should really be abolished and replaced as a holiday by November 9.[3] [5]

Perhaps it should be designated a national day of mourning—this would honor the remarkable confusion of ideas which would put “mourning,” usually understood as the feeling of pain at separation, in place of “penance,” “remorse,” and “gnashing of teeth” as a consequence of “guilt.” This does not mean that the culprit nation should mourn the loss of its Jews—that is set aside for their own families and the other members of their nation—but rather that their destruction is to be “regretted.” However, the concept of mourning—often reduced to kitsch under the name “labor of mourning”—has spread widely, probably out of pure thoughtlessness and because people like to repeat the name of a book they have never read.[4] [6] The introduction of an official Day of Mourning on November 9 would, however, have interesting implications, for a whole variety of occasions for mourning could be found on this day: nationalists could mourn the loss of the First World War, the incorrigible Right the failure of Hitler’s Beer Hall Putsch, the incorrigible Left the downfall of the DDR [East Germany].[5] [7]

In any case, the Jenninger Affair throws a striking light on political ritual in the last years of the old Federal Republic. Let us consider once more the cast of this comedy: the stammering politician who read out to an audience prepared for the usual content-free expressions of dismay a text of inappropriate complexity, and therefore led to (intentional or unintentional) misunderstanding; the audience which, from lack of education or demagogic calculation, misunderstood it; the domestic and foreign commentators who claimed to sense something “dangerous” or “unovercome” in the text—the whole well-practiced machinery of suspicion, accusation, denunciation, condescension, and hypocrisy was set in motion. A pressure for conformity that reaches the remotest ramifications of public consciousness was constructed that makes any departure a risky business. Once again it was impressed on all skeptics and scoffers not to forget the submission demanded by the ritual of the national religion, as philosophy has always recommended.

The inveterate conspiracy theorist immediately asks about those pulling the strings in regard to such campaigns, or at least cui bono. He instantly suppresses any though of Jewish-Israeli interests. But are there no directors of conscience in Germany itself? For example, Communists? Once the outdated Antifa-Position lost its real opponent, didn’t new opponents have to be invented in order for it to remain morally in the right? Or did the whole racket merely express the disappearance of real opportunities for moralizing, the systems growing and becoming ever harder to get a grip on? In that case, all of this would only be a rear-guard action of totalizing, a last simulacrum of politics before the string-pullers notice that they themselves are barely holding on to their strings, not to mention that nothing significant is hanging from them any longer.

But who today is still a conspiracy theorist? Our enlightened contemporary no longer believes in any Machiavellian struggle for cultural hegemony; instead, he is convinced of the entirely objective functioning of all decision-making processes. The various waves of historically-oriented indignation then appear as a mere expression of fundamental spiritual innocuousness which flourished within the protective space of Germany. This is the whining innocuousness of the nursery, where, supervised and cared for by kind and powerful parents, one can make all sorts of claims upon and demands of the world. So the all-embracing moralizing can be interpreted as the result of a lack of political weatherproofing. It is less a matter of cultural Machiavellianism than of moral infantilism—the result of an intellectual pacifier comprehensively employed in the name of emergence from a self-imposed tutelage.[6] [8]

Even though Germany has today disappeared as a historical quantity and become a mere concept of economic geography, its dreadful name will remain in the memory of the nations quite independently of what happens in this country. Since the Holocaust did not happen to any old profane people, but to a chosen people, the culprit nation was also removed from profane history and raised to the status of imperishability. Christendom built cathedrals to its murdered God in every town, and they still provoke the wonder of gazing tourists today, long after that faith has become unintelligible. The Jews, whose own God assured them of immortality, now build memorials to their murdered fellows all over the world, whereby not only is moral superiority ascribed to the victims, but also eternal depravity to the culprits and their symbols. After the real Germany perished, it remains enduringly present as a myth. But the fellahin who live out their lives in the ruins of its cities were thus transposed into the realm of the transhistorical, which forms the basis of their practical success. Here is the payoff for the callousness derived from a permanent confrontation with myth: the people who live in Germany have gotten just as used to dealing with anti-Germanism as the Jews had to get used to dealing with anti-Semitism.

[1] [9] Penance and Prayer Day, a German Protestant holiday celebrated on the penultimate Wednesday before the beginning of Advent, i.e., November 16-22.

[2] [10] Speech of Philipp Jenninger to the German Bundestag on November 10, 1988, in which he attempted to explain why Germans had been so enthusiastic for National Socialism in the 1930s. In the resulting controversy he was accused of having made excuses for, if not expressing enthusiasm for, National Socialism.

[3] [11] The Night of Broken Glass in 1938, generally held to mark an acceleration of National Socialist persecution of the Jews.

[6] [14] The final words allude to Immanuel Kant’s definition of enlightenment.