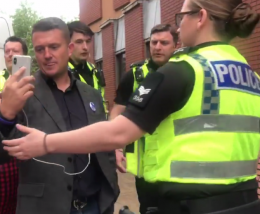 Audio version: To listen in a player, click here [2]. To download the mp3, right-click here [2] and choose “save link as” or “save target as.” To subscribe to the CC podcast RSS feed, click here [3].

On Friday, May 25th, British anti-Muslim agitator Tommy Robinson was arrested outside Leeds Crown Court as he live-streamed accused members of a Muslim gang of child rapists who were entering the building for sentencing. After more than an hour, he was arrested.

He was then convicted of contempt of court. There were broad restrictions on reporting the trial until its conclusion. Violating this order could be used by the defendants’ lawyers to argue for a mistrial.

Yes, Robinson’s actions actually made it more likely the defendants would go free.

Robinson cannot, moreover, plead ignorance of the law, because last year he was arrested for the same offense at a gang-rape trial in Canterbury. In that case, his sentence was suspended under condition that he not reoffend for another 18 months. Because he violated the conditions of his suspended sentence, he was ordered to spend 13 months in jail. The judge also ordered that the case not be discussed in the press — probably because of the ongoing nature of the proceedings. Apparently, a new batch of defendants will be tried starting in September.

The fact that Robinson’s safety in jail is threatened by large numbers of non-white and Muslim prisoners is unfortunate. But that is not an argument against jailing him, since that would basically give him carte blanche to break the law with impunity. He should, however, receive special protection in jail.

But we need to think this through.

No legal system is perfect. But outlawing contempt of court is not an illegitimate, Orwellian form of repression. Its purpose is to secure due process, on the assumption that this leads to justice. Again, by interfering in the court proceedings, Robinson actually made it less likely that the criminals will be punished. But he went to the courthouse anyway.

His motive is unclear. Given that he had already been arrested for the same offense, he clearly knew what he was doing. Thus he must have judged this publicity stunt worth the risk of setting a gang of child rapists free. That’s a breathtakingly selfish decision. I don’t see any way of avoiding the conclusion that Tommy Robinson is morally reckless and probably a bit stupid.

Tommy Robinson could have gone anywhere in the UK on Friday, May 25th to raise awareness of Muslim child rape gangs. But he chose to come to the one place where his presence might actually impede justice for the victims, not promote it. Mull that over a minute. It’s a rather amazing lapse of judgment.

Nationalists, therefore, should not be rushing to Tommy Robinson’s defense.

Loyalty to our team is admirable. But our first loyalty should be to our cause. And if people bring our cause into disrepute, we need to call them on it. Tommy Robinson has harmed the cause of justice for the victims of child rapists. He has made it harder, not easier, for these rape gangs to be successfully prosecuted.

White advocates have the whole system against us. Our only allies are truth and justice. Our greatest source of credibility is speaking the truth and defending justice.

But truth and justice are not on Tommy Robinson’s side. I hope he receives safe custody and the due process he would so casually deny others. But white advocates around the world need to guard our credibility, not squander it in what is essentially a white chimp-out based on the false premise that Tommy Robinson is a martyr for freedom of speech and the pursuit of justice for the victims of Muslim pedophile gangs. Trayvon Martin and Michael Brown were not innocent children martyred by racists. They were victims of their own poor judgment and reckless behavior. The same is true of Tommy Robinson.

The UK’s globalist, multiculturalist establishment is clearly resorting to totalitarian measures to retain its grip on power in the face of the horrific consequences of non-white immigration and the inevitable rise of white populism and nationalism. There are plenty of genuine cases in which the political establishment and press are covering up non-white crimes against whites. There are plenty of genuine cases of Orwellian censorship, surveillance, and persecution of pro-white dissidents in the UK. We should save our protests for real victims, not Tommy Robinson.