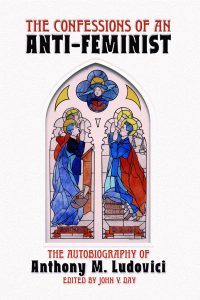 Anthony Mario Ludovici (1882–1971), anti-feminist, novelist, translator and interpreter of Nietzsche, art critic, defender of aristocracy and critic of democracy, was the author of forty books and well-known in early 20th-century Britain. If time has not been kind to his fame, it is largely because the modern tendencies he criticized so effectively have only gathered strength since he wrote.

He left The Confessions of an Anti-Feminist—a combined Apologia Pro Vita Sua and memoir of his relatives, friends and collaborators—to be published after his death. For reasons unknown, his executors failed to carry out this provision of his will.

Indo-European scholar John V. Day has been leading a revival of interest in Ludovici’s work in recent years, publishing an anthology of his writings under the title The Lost Philosopher and maintaining the website http://www.anthonymludovici.com/ [3]. Now he has edited and published Ludovici’s autobiography through Counter-Currents.

Not a little of the book has already been published piecemeal here at the Counter-Currents website:

But the full book will provide plenty of novelties even for the assiduous reader of this site, including Ludovici’s reminiscences of family members and colleagues, as well as a long section entitled “My Life Work” where he systematically reviews and comments upon his many publications.

The title of his autobiography is sufficient proof that Ludovici considered the critique of feminism as close to the center of his thinking, and the decades that have passed since his death have made a proper understanding of this quintessentially modern movement more urgent than when Ludovici was first developing it in the wake of the suffrage movement.

Ludovici’s critique begins from his rejection of (in his own words) “the Socratic teaching that body and soul are unrelated”; he deplores the tendency to “discuss human beings as if they were disembodied spirits.” This perspective is related to his interest in physiognomy, expressed at a number of points in the autobiography, as well as race and eugenics.

He next remarks that the normal adult woman physically resembles a child more closely than does a man, mentioning in particular “her late retention of the softness, suppleness, immature appearance and freshness of the child.” He cites Havelock Ellis and other sexologists in support of this observation.

From these two premises he concludes that women are likely also to present, at least in comparison to men, a greater mental and behavioral resemblance to children.

Now, among the more salient attributes of the child are its assumption of its prescriptive right to appropriate anything it can lay its hands on; to enjoy every small present gratification even at the cost of some prospective greater one; to be unable to look on its actions in the light of their public effect; to be quite unable to understand the need or purpose of discipline, and to accept corrections of its behavior only as tiresome obstacles to be circumvented and bearing no relation to its future conduct; and, finally, to use speech only as expediency requires, without any thought of accuracy. In short, we cannot improve upon Freud’s statement that the child is ruled exclusively by the pleasure principle.

Properly trained and intelligently and vigilantly disciplined, the male child, as it slowly progresses toward adulthood and sheds the physical characteristics of its unripe years, will succeed in ultimately submitting to the demands of the reality principle and in cheerfully accepting the limitations it imposes on personal freedom.

Ludovici then discusses the rise in juvenile delinquency in postwar Britain as an indication that children were no longer being properly disciplined. This he attributes to “the growth of feminine influence over our national life.” These remarks have been confirmed in the decades since he wrote by massive evidence of a statistical correlation between fatherlessness and crime.

As Ludovici points out, many talented thinkers of the past have remarked on the danger of feminine influence in public life: beginning with Aristotle, who attributed the decline of Sparta to their having conceded too much power and influence to women (Politics 2:9). He quotes similar observations from Rabelais, Montesquieu, Balzac, Dumas fils and Schopenhauer. These earlier thinkers failed, however, to see the importance of the physical resemblance between women and children.

The most important truth about woman is that, through her childlike body, she carries into adulthood the characteristics of the child. Hence, wherever she becomes the dominant influence there necessarily occurs a steady breakdown of all order, all discipline, all public spirit, all sense of responsibility and all morality. Anarchy prevails.

He points to contemporary increases in littering and queue-jumping in Britain as evidence. The fundamental problem is that mothers alone are unsuited to provide children with proper discipline:

Inconsistency in reprimand; inconsistency in the fulfillment of threats; the measure of rightness and wrongness reduced to what happens momentarily to suit the convenience, mood or caprice of the female parent; and the repeated improvisation of rules, on the spur of the moment, which the children know from experience possess no validity for the future—these are some of the more salient behavior-features of the average home today. Discipline under such conditions rapidly becomes a farce, and the young grow up without any sense of self-restraint; with a secret contempt for all authority; with a bias in favor of snap judgements on every possible subject; and in complete ignorance of those obligations to the rest of the community which constitute what is called public spirit.

He cites a contemporary sociological study (by a female researcher, incidentally) of maternal discipline in Britain: “On the whole children are trained by a mixture of indulgence, shouting and threats . . . Discipline seems generally to take the form of an attempt to get peace for the moment rather than any long-term policy.”

It is interesting to find Ludovici deploring a BBC television drama of the day in which a father’s vain efforts to discipline his children are held up to ridicule. Clearly, the producers were ahead of their time!

This reviewer was especially interested by the author’s citation of two researchers’ attribution of woman’s anarchic nature to resentment at being denied “the primitive right of ‘free-mating.’”

The resentment felt by women over [this] loss suffered through civilization makes them instinctive enemies of society, contemptuous of its rules and regulations, and consequently predisposed to promote anarchy and welcome any national upheaval, such as a great war or revolution, which suspends for a while the irksome restrictions on free sexual intercourse.

Ludovici was writing his autobiography at around the time Betty Friedan was launching “second wave feminism”; his own data came entirely from the suffrage movement of the early 20th century, with its demand for “the futile vote.”

I was never deceived by the ostensible motives of the female suffrage movement. From the beginning I suspected it of being prompted by subconscious forces bearing little relationship to politics. I was never in any doubt that the basic cause of the decline in the quality of our civilization was the degeneracy of the civilized male. It was he who abdicated his position as leader and tone-setter of the domestic and social circles of the community. On this account, feminism, far from being a spontaneous and wholesome uprising of ebullient and flourishing womanhood, was merely a morbid reaction to the general inadequacy and supineness and feebleness of the male.

Like anti-feminists today, Ludovici was often criticized for the supposed inconsistency between his views and his devotion to the women in his own life. He rightly points out that such critics “are labouring under the delusion that to feel genuine love one must cherish the romantic illusion that the loved object is flawless and destitute of any blemish.”

The reviewer has preferred to give a detailed treatment of one particular aspect of Ludovici’s thought rather than to string along bits and pieces of his theorizing on several subjects. But the prospective reader should be warned that the critique of feminism occupies only twenty-two pages toward the end of the autobiography. Other sections deal with the author’s criticism of post-impressionist art, his rejection of democracy and support for aristocracy (perfectly consistent with his understanding of the shortcomings of the British aristocracy of his own age), his appraisal of Christianity and of Jewish influence in modern Britain, and even an original theory of laughter. Much of the book’s interest also lies in the many character sketches of the author’s relatives and friends. Highly recommended.