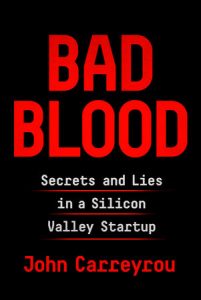 White advocates should take a look at a sordid tale that played out in Silicon Valley from 2006 until 2015. The mess centers around a start-up company called Theranos [2] and its CEO, Elizabeth Holmes. Since a main goal of Counter-Currents is to impart wisdom to younger white men, this author felt it was important to write a review on Wall Street Journal investigative reporter John Carreyrou’s book about the matter. The story is a mixture of political correctness, logical fallacies, good and bad leadership styles, and above all, fraud [3].

All of this can be applied to “The Movement.” To be completely frank, there are plenty of frauds and con artists in our scene. In fact, there are probably more sociopaths and swindlers in an edgy sociopolitical set than in America’s business community.[1] [4] Unfortunately, there are very few books dedicated to dissecting and examining “The Movement”’s many dangerous people. However, an examination of a parallel social disaster can be extrapolated to match one’s own circumstances and serve to enlighten one in a way which might lead to progress.

The story of Theranos can also be applied to one’s career and life choices in general. Being aware of the “JQ” is but one facet of wisdom. Another facet is finding a worthy vocation. In lieu of that – simply making a living. On a personal note, this author did himself once work for a start-up company.[2] [5] Indeed, I was the first employee hired, and in addition to my regular duties, I recruited for the company. I did this while raising a young family. That company fell apart because the founding partners were looking to cheat each other from the get-go and then proceeded to actually cheat each other. After the company collapsed, I was left raising a family and looking for a new job while drawing a paltry unemployment check. Before being hired by a start-up, be aware that some eighty percent of most businesses fail in the first year. In Silicon Valley, a start-up company that begins to attract serious capital and solid publicity is called a “unicorn.”

The Story of Theranos & the Mary Sue of Silicon Valley

Carreyrou’s story of Theranos starts in November 2006 and ends in March 2018. His sources are mostly former employees. Central to the story is a Stanford dropout named Elizabeth Holmes.[3] [6] Holmes was from a prominent family [7] that had been successful in business, as well as in military and government service. She grew up in a high-class neighborhood in Washington, D.C. Holmes’ vision was to create a medical device which was compact and only required a small blood sample from patients in order to run many types of medical tests [8].

Since the technology she was selling was proprietary and in various stages of the patenting process, Theranos had a culture of secrecy. Employees had to sign non-disclosure agreements. In some cases, the police were called during firings and other disputes. There were also a number of lawsuits. All of this could be justified because Theranos’ research and development very much needed to remain secret. Inventors are only as good as the timeliness of their patents and the lawyer who files it, but as events played out, the secrecy became more of a harbinger of things to come.

Holmes deliberately dressed like Steve Jobs. She also faked a deep voice when speaking (her voice can be heard changing in this video [9]). Her leadership style was typical for a dynamic leader of a start-up company. She could inspire, frighten, console, and when necessary, pitilessly dismiss her employees. She even fended off a challenge by Theranos’ Board of Directors to replace her in 2008. Indeed, she was an excellent leader.[4] [10] Good leadership includes one’s ability to handle unpleasant duties such as disciplining and firing employees, as well as sniffing out and defeating conspiracies against one’s leadership [11].  Holmes was also inspiring. Most of her employees and all of her investors believed in her vision. 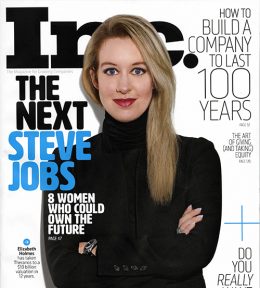 From 2006 until 2015, Elizabeth Holmes had built a company valued at $9 billion. Holmes had entered into partnerships with Safeway and Walgreens. The US Army was looking to buy and field her blood-testing machines. Holmes enjoyed a flurry of good press [13] and flattery . . . but the machines didn’t work, hadn’t worked, and weren’t about to start working. It was all an elaborately-constructed fraud. An October 2015 Wall Street Journal article [14] exposed the company. Looking backwards, it is probable that Theranos was a fraud from the start, rather than simply a Silicon Valley company that overhyped its product [15]. This is how the scam worked:

Eventually, the proprietor of an obscure Website called Pathology Blawg became skeptical of Theranos’ claims and published his doubts. Furthermore, former employees and victims of Holmes’ lawsuits started to pass information to investigative reporter John Carreyrou, who wrote the aforementioned WSJ article. For Elizabeth Holmes and Theranos, it all went downhill from there.

It’s All Fraud East of Suez

Again and again, in my experience, I must say, “If it ain’t white, it ain’t right.” If we ever meet face to face, gentle reader, I’ll tell you some tales as to why I think this is true. The most “ain’t white, ain’t right” part of this story is Theranos’ Chief Operating Officer, Ramesh “Sunny” Balwani [17]. As this article is being written, Balwani has just been charged, but not convicted, by the Securities Exchange Commission for fraud, so his criminal wrongdoing as yet remains alleged. Balwani has probably had his information scrubbed off the Internet and he disappeared for a while after the scandal broke. Some employees thought he’d fled the US altogether. 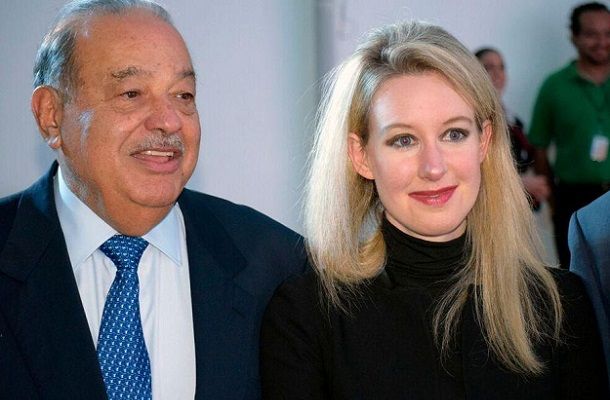 As the legal drama regarding Theranos’ decline unfolds, there will likely be a cleft between Holmes and Balwani over who was responsible for what. Holmes can argue that her job was to find inventors and provide a vision for the company while Balwani was there to run the labs and get the blood-testing machines working. Holmes can thus say that Balwani is responsible for the lion’s share of the fraud. It is likely, however, that Holmes picked Balwani to help her carry out the alleged fraud. Holmes and Balwani were, for a time, in a romantic relationship. After seeing the situation for what it was, some of Theranos’ engineers called the situation a folie à deux – a delusion shared by two people, in this case Holmes and Balwani. This is what Balwani did:

Carreyrou’s description of Balwani’s actions match much of what I’ve seen dealing with Asians in my own career. In short, they all “ain’t right.” In this case, I am referring to Asians in the broad sense, not just Indians. A true grasp of cause and effect seems to elude them. The scientific method didn’t originate in India or China. Essentially, east of Suez, it’s all a fraud. Many Asian languages have words that emphasize this. Persian, for example, has zerangi [19] and Hebrew has chutzpa. Once the Chinese learned the English expression “going through the motions,” they started using it all the time. Anthropologists call the basic cultural worldview in Asia amoral [20] familism [21]. Amoral familisim is a situation where a person only acts in the interests of their family. Companies operating in societies with this worldview can’t hire the best man or produce organized systems.

Learning How to Spot a Fraud

Elizabeth Holmes left a trail of destruction in her wake. One of her engineers fell into a deep clinical depression and ultimately committed suicide. Patients were put at risk because of the bad readings from her machines. Actual wealth was squandered on her company. Scientists who could have been working on a more useful project were ensnared in Holmes’ web. In short, Theranos’ failure resulted in real costs.

On a final note, one must again emphasize the cliché that all that glitters is not gold. Things that are politically correct, i.e. “women and minorities,” always need a second, harder look. Do not enter into a transaction with any Asian that is any more difficult than bazaar levels of sophistication. For that which is complex, invest in experienced whites, and to get experienced whites, hire young whites.

[1] [24] Another insight into the Theranos disaster is the idea that the government, in this case the Food and Drug Administration, can help get rid of quacks. It is clear that the libertarian ideological model of “small government” would have allowed Theranos to carry out its swindle longer than it should have.

[2] [25] While writing this article, I asked a colleague about his experience in a start-up. He’d worked in two; both fell apart and he couldn’t even sell the stocks from his first company. Another colleague chimed in about a company that sold for $32 million, making its five original owners quite rich. Start-ups seem to attract people who are comfortable in moral shadows. White advocate Ben Klassen made his fortune in real estate. He described his business partner in his Silver Springs, Nevada venture as a semi-crook.

[3] [26] Holmes was also descended from Charles L. Fleischmann (1835-1897), a wealthy manufacturer of yeast. Fleischmann was Jewish but married outside of the group. So while she had some Jewish ancestry, it is impossible to put Holmes in any ethnic category other than that of Wilmot Robertson’s American Majority.

[4] [27] A good example of Holmes’ leadership and vision can be seen in this TED Talk [28]. (The talk itself was a bit of a fraud. She was not close to the uncle she references in it.)