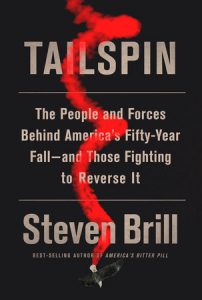 Steven Brill’s Tailspin is cant and claptrap, less important for what it says than what it avoids.

There’s an old Twitter joke, or meme, called “Fellow White People.” It plays off how Jews in the media will call themselves “white” when it’s time to browbeat the goyim about racism, xenophobia, whatever. But when they want to talk mainly amongst themselves, and bang on about how they’re a special minority—well then! White people are the other, the enemy.

Memes can get tiresome with repetition, but this one keeps getting funnier and funnier. Because the J-media is aware of it—look at this squib [2] from the Forward last November—and yet they keep pulling the stunt as if the arrant hypocrisy is perfectly fine, and we’re big bigoted meanies for noticing.

The new Steven Brill book, Tailspin [3] (subtitle: The People and Forces Behind America’s Fifty-Year Fall—and Those Struggling to Reverse It)is a new twist on “Fellow White People.” Our broken society, financial corruption, crooked lobbyists, crumbling infrastructure are all the fault of…”Boomers”! Yes, Boomers like Brill, who profited from “meritocracy.” 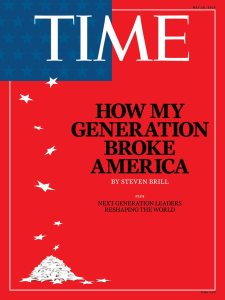 [4]You may have seen the extended excerpt that ran as a cover story in Time [5] magazine a few weeks ago. (“How the Baby Boomers Broke America.”) It told about how Brill himself was a beneficiary of the social changes that transformed the country in the 1960s and 70s. A smart-but-scrappy Jewish boy from darkest Queens…so low-class his parents ran a liquor store…went to a public school so awful none of the teachers could tell him what a “prep school” was! But smart, scrappy Steve looked around, and got himself a scholarship to Deerfield Academy! And a little later: automatic acceptance from Yale, courtesy of the new director of admissions, “Inky” Clark, whose mission in the latter Sixties was to screw the traditional intake from St. Paul’s and Hill and Lawrenceville and Canterbury . . . and fill Yale up instead with lots and lots of smart, scrappy Jews from Far Rockaway, Queens. Only in America! Still later, Steve Brill went to Yale Law School and joined the emerging ruling caste of smart, scrappy kids who had big paychecks and power, but no sense of loyalty to the country, no noblesse oblige, no sense of tradition or roots.

Whoever wrote the book’s end-flap blurb had tongue firmly in cheek:

In Tailspin, we learn how…an Ivy League’s admissions director’s 1960s drive to curb old-boy favoritism unleashed long-needed reforms, but also created a new aristocracy: the overachieving meritocratic elite. We see how a privileged minority came to be protected by the moats their winnings have bought…

This is Tailspin’s core thesis, and it takes up the first 50 pages of the book. The other 400 pages are filler and apparatus: chapter upon chapter of jeremiads about our failure to do enough for the poor and minorities; political gerrymandering; the dangers of deregulation and the lawyers the who caused it; how we have Lost Our Sense of Community and now live in a “Moat Nation.” We get 100 pages of endnotes, superfluous bibliographic references (most are pendulous internet URLs—have fun typing those in!), and a really useless Index that lists nothing at all between . . .

. . . which really, under the circumstances, is a weird omission. Something else you won’t find is a listing for is Clear [6], a short-lived airport-screening company that Brill founded a dozen years ago. It looked like a scam—you gave them $100 per year for expedited security lanes, and you got nothing but promises back in return. It soon went bankrupt, a victim of overreach and incompetence. The technology wasn’t ready, they hired low-grade employees, and there was no financing or revenue beyond those customer “subscriptions.” (Another company with the same name and concept has since been set up.)

Brill’s two legal-minded enterprises are there, though: The American Lawyer, and CourtTV. A magazine and low-budget cable channel, these were by nature self-funding and required no huge innovation or capital outlay.

I mention his business history because some of Brill’s proposed economic solutions are just jejune. On the subject of job retraining, he promotes the fantasy that unskilled laborers should be retrained “to learn iOS or Android coding.” Brill doesn’t know we already have a glut of “coders.” The only people making money from this Learn to Code delusion are the ones pushing shady outfits with names like WebDev BootCamp. Brill’s experience in the field apparently consists of serving on the board of a foundation that brings poor people together in an old zipper factory in Queens, where a Chinaman from Taiwan shows them how to build “apps.”

His political analysis is picturesque but confused. He believes that most Americans are dependent on government, only a small fraction fear government, and it is that small, suspicious fraction who voted for Donald Trump:

The coming of the Trump Administration featured the ultimate in moat fortification. Americans have been divided into two groups: the vast majority who count on government to provide for the common good, and the minority who don’t need the government for anything, or even view the government as something they often need to be protected from. One of the most breathtaking outrages of the Trump presidency is that those in the latter group were brought to Washington to run the government.

But as I said, this gobbledygook is just padding. Don’t try to make sense of it.

On the book’s publication date, David Brooks got back to Tailspin‘s core thesis and riffed thusly on the NYTimes [7] Op-Ed page:

Once upon a time, white male Protestants ruled the roost. You got into a fancy school if your father had gone to the fancy school. You got a job at a white-shoe law firm or climbed the corporate ladder if you golfed at the right club.

Then we smashed all that…

….Diversity for its own sake, without a common telos, is infinitely centrifugal, and leads to social fragmentation.

Aside from Brooks’s cliché-Jewish cartoon of what America was like before he got here, it’s clear he has a better handle on the problem than his Landsman Steven Brill. America was something that worked . . . we destroyed it . . . Diversity is destructive . . . you can’t have community without shared identity.

I suppose what Brill was really attempting was a lamentation for his era. For form’s sake he fills the book up with public-policy drivel, but mainly he’s mourning societal chaos, while refusing to acknowledge what was really going on. Does he really not get it? Dissolution of community, and failing institutions—these didn’t happen on their own. They were caused deliberately, over decades and generations, by those who profit from population replacement and societal chaos. These effects are not accidental byproducts of  lofty but misconceived schemes; they are the whole point of those schemes. Just as slavery and mass-murder were not unfortunate side-effects of Soviet Communism, they were what the system was all about.