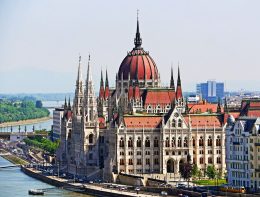 The following report was published on June 20 at the Hungary Report [2] Website.

Parliament on Wednesday passed the “Stop Soros” package of laws that penalize activities in support of illegal migration. Lawmakers also passed the constitutional amendment on “the preservation of Hungary’s Christian culture.”

The bills contain amendments to the penal code that sanction entities or organisations that “facilitate illegal migration” or help with the asylum application procedures of migrants arriving from safe countries.

The bills define the promotion of illegal migration as an organized activity helping a person not in danger of persecution to submit an asylum request or to obtain a title of residence. Financially supporting illegal migration, gaining from it financially, or undertaking such activities within eight kilometers of the border are punishable with one year’s prison sentence.

Under the new law, surveillance of the border, gathering or distributing information, and setting up or running a network will also qualify as organization of migration.

Parliament has also changed the refugee law, under which asylum applications submitted by persons arriving from safe countries shall be rejected.

According to the proponent of the package, the new laws are in line with the Geneva Convention, which ensures protection only to those that arrive directly from lands where their life or freedom are in danger.

Under the proposal, Parliament has changed the law on Hungary’s borders, stipulating that anyone being prosecuted under charges of crimes in connection with border protection shall be banned from coming within eight kilometers of the border, except for people who have been residents in that zone for at least five years. The new laws will take effect on the first day of the month following its publication.

The bills, submitted by the Interior Minister and requiring a two-thirds majority to pass, was approved with 160 votes in favor and 18 against. Parts of the package requiring a two-thirds majority were supported by deputies of the ruling parties, Jobbik, independent MP Dúró Dóra, and Imre Ritter, the representative of the German minority, while the Socialist and Párbeszéd group, independent Anett Bősz, and Ákos Hadházy, who has just announced that he is quitting the LMP (Left-wing, Politics Can Be Different) party, voted against. All other representatives stayed away from the vote.

On Tuesday, the government submitted a bill seeking to introduce a twenty-five percent special tax on organizations that support migration with a view to contributing to government spending on the handling of migration. Revenue from the tax will be spent exclusively on border protection measures, according to the bill.

Lawmakers also passed a government-initiated constitutional amendment on “the preservation of Hungary’s Christian culture,” the creation of an administrative high court, and on banning homelessness. The amendment also declares the protection of Hungary’s constitutional identity as a duty of the State. It also states that foreign nationals cannot be resettled in Hungary.

The amendment requiring a two-thirds majority was passed with 159 votes in favour and 5 against. It was supported by the ruling parties, Jobbik, Dúró Dóra, and Imre Ritter. Ákos Hadházy and the representatives of the Párbeszéd group voted no. The MSZP (Socialist Party) and LMP had previously said that they would stay away from the vote, and DK (Democratic Coalition, Left-wing) lawmakers didn’t vote, either.

Jobbik said the proposals “have many flaws,” but the strongest opposition party agrees with the principle that Hungary’s security and protection comes first. According to the party’s statement, they also agree with the protection of Christianity and private property, and reject the migrant quotas. MP Ádám Mirkóczki told a press conference that the directions of the amendment were correct, but “its means are insufficient” to achieve its goals. Mirkóczki insisted that the final draft was very different from the original proposal, and said it was an “illusion” that it could be enforced. He argued that while the proposal was originally drafted “to prevent any form of migration,” entrants from Serbia, a safe country, should be granted asylum under the Geneva Convention. Neither will any rough sleepers be arrested under the amendment, he added.

Socialist Party leader Bertalan Tóth said the constitutional amendment “has many facets,” but was “primarily an attack on the independence of the judiciary.” Speaking at a joint press conference with Párbeszéd co-leader Gergely Karácsony, Tóth said ruling Fidesz “wants to create a tame court of justice” where government officials can make decisions which are otherwise the prerogatives of judges. Fidesz “has tried setting up administrative courts before,” but failed to garner a majority, he noted. The Socialists “are not going to assist this propaganda move,” he said, adding that the parliamentary group decided to stay away from the vote.