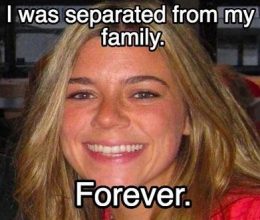 Kathryn Steinle, who was murdered by an illegal Mexican immigrant on July 1, 2015.

If ever there were an argument against giving women the vote, it’s demonstrated in the media’s attempt to hijack women’s hindbrains and override all possibility of rational thought by playing literal audio of children crying for their parents at the US-Mexico border [2].

If there were ever a way to get people who have no vested interest in an issue, and have spent no time studying the facts of a case, riled up enough to march out to vote, this is it. The sound of crying has such a powerful mammalian impact on women that it can literally cause them to lactate [3]. A company called Hygeia attaches a button to their breast pump products that allows women to record the sound of their children crying so that they can press it later to trigger letdown when they’re away from their children.

These are absolutely natural and healthy instincts for women to have. They obviously work to allow women to be more effective at performing feminine duties. But they do not make women better men. They do not scale into the big-picture scale of mass politics.

These people are literally committing emotional abuse against women in order to brutally force their policies past the challenges of public discourse. And you’d better believe there will be thousands of pregnant and post-partum women as well as women with PTSD who will be affected by this abusive manipulation enough to vote for whatever the people manipulating them tell them will make it better.

Never mind the fact that we saw a significant increase in the number of children forcibly separated from their families before this policy was put into place.

Never mind the fact that this is actually exactly why this policy was implemented.

Yes, I’m talking about children forcibly separated from their families by migrant kidnappers.

The Department of Homeland Security [4] reports that between October 2017 and February 2018, there was a whopping three hundred and fifteen percent increase in the number of cases of adults with minors “fraudulently posing as ‘family units’ to gain entry.”

DHS does not have a blanket policy of separating families at the border. However, DHS does have a responsibility to protect all minors in our custody. This means DHS will separate adults and minors under certain circumstances. These circumstances include: 1) when DHS is unable to determine the familial relationship, 2) when DHS determines that a child may be at risk with the parent or legal guardian, or 3) when the parent or legal guardian is referred for criminal prosecution.

Think about what ending this policy would mean. It would mean literally rewarding child traffickers and kidnappers with an increased chance of citizenship for engaging in kidnapping and trafficking. This is exactly what we were doing before, and it’s exactly why we saw a greater than three hundred percent jump in this very activity under the catch-and-release system we had before.

Of course, we could just as easily have seen a campaign calling for the full abolition of prisons using these tactics. And why not? Literally any time anyone ever commits a crime, it separates them from their children. So why aren’t we blasting audio of children crying, since daddy went to jail for armed robbery, in order to manipulate women into supporting the full dissolution of all police forces, prisons, and jails?

“But children aren’t held in facilities when their parents commit crimes,” you might say. That’s only because there’s usually another parent at home who can continue taking care of them. But what do you think happens when a single mother commits a violent crime, or both parents go to jail together? They most certainly are kept in holding facilities. [5] But unless it’s part of a discussion about how throwing blacks in jail for marijuana use separates families [6], you will never see the mainstream media raise a peep about it.