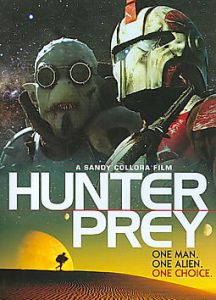 “I sold my comics to make this movie!” — Sandy Collora

Hunter / Prey is an independent sci-fi movie from 2010 by producer Sandy Collora. Although Collora is potentially part of the tribe, Hunter / Prey is such a departure from popular sci-fi in the current year that it’s an interesting examination of how the genre can be revived and redirected. With a constraining budget of under half a million dollars, Hunter / Prey is a tightly-scripted, action-focused film that makes the most out of what can be achieved with that small sum — actors running around in costumes in the middle of the desert, with a computer graphics starship to set the thing in motion. 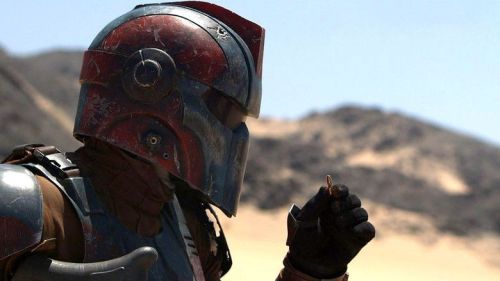 The ship, carrying a dangerous prisoner, is forced to make a crash-landing onto a desert planet that experiences scorching 33-hour days. During the crash, the masked captive makes his escape. The soldiers who pursue him are all dressed in what looks like Power Ranger armor if it had been designed by King Leonidas. Unlike real Spartans, however, these mercenaries are barely competent and argumentative, and so are easily picked off one by one. Nonetheless, they have the edge of possessing superior armor and weaponry, and thus begins a deadly cat-and-mouse game of misdirection and deceit. A rescue ship has been summoned, and the countdown to its arrival keeps the tension high.

With the believability provided by professional actors, costumes produced out of a labor of love, and a plot mercifully free of any politically correct tropes or moralizing, Hunter / Prey is an immersive film that is outright superior to much mainstream cinema. It demonstrates that more really can be less when the audience focus isn’t spread like Marmite over multiple protagonists (for example, Infinity War and The Last Jedi both suffered from an overload of potential leads). Hunter / Prey has eight walking characters plus one disembodied computer voice, and no more than four are present at any one time. As the movie progresses, this is whittled down to two: the handsome and muscular Aryan, Clark Bartram (an American fitness guru and author), and the alien African-American Damon Poitier wearing Blue Man Group face-paint. Poitier stars alongside another alien played by an African-American, Isaac C. Singleton, Jr., so the ethnic breakdown of the cast intentionally matches the fictional species. Besides this, Collora himself stars as one of his own monsters, a bounty hunter with orc ears and plenty of teeth. Between the well-crafted and memorable outfits and clearly inhospitable setting of Mexico, Hunter / Prey creates a racially-charged tale of survival and revenge through its cast and direction alone.

With such paltry resources to work with, and absent big sets and swathes of extras to establish that this distant planet really is another planet, Hunter / Prey has to rely on expository dialogue to build up the universe and bring further meaning to the violence the actors mete out to each other. Without this, Hunter / Prey would lapse into being a costumed tussle-up. In order to make itself work and to make the actors representative of larger, believable factions in conflict, Hunter / Prey falls back on cinematic tropes that have since been abolished by multicultural cant: the heroic white man enduring and overcoming savagery, and something even more taboo, irreconcilable ethnic conflict. Racial animosity and the threat of might-makes-right genocide is at the heart of this film.

Collora and his writers take pains to demonstrate the essential difference between the human prisoner and his pursuers: The prisoner mask Bartram is forced to wear has some kind of inhibiting or feeding tube that goes down his throat, and the aliens drink the blood of the resident rodents by impaling them with a tube that feeds into their helmets. Engrossing body horror elements like this and others make the characters of Hunter / Prey believable as individuals acting out part of a galactic conflict.

We learn early on that the prisoner is “the last of its kind” and that Earth has been snuffed out for the war-crime of harboring refugees of another race. Lieutenant Oran Jericho, bearded and with piercing grey-blue eyes, is on a vengeance mission to return the genocidal favor. When the treasonous Centauri-7 recaptures him, there’s a dialogue of constant taunts and bluffs as “human” (white) and alien try to assert the moral high ground. The audience is explicitly told that Centauri’s race of Sydonians enslaves or destroys all others races it encounters — “if they don’t accept our way of life, then yes!” There is clearly no room for compromise and no separate peace is possible — unlike the cosmopolitan Cantina of Star Wars, Hunter / Prey offers a species that is not only savage and stupid, but believes itself completely entitled to wipe out entire worlds that don’t assimilate to Dhimmitude. “It is our way!” yells the indignant alien. 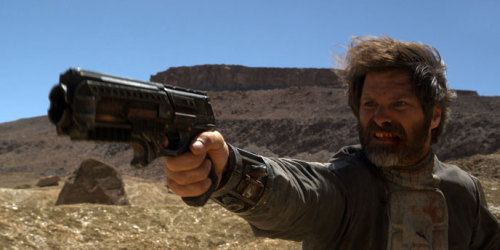 All of this may seem a bit much for the safely neutered soyboys of contemporary geekdom. In order to make it palatable to the Hollywood Left and keep himself employed, Collora has the Amazon Alexa that the soldier Centauri-7 carries sound suspiciously like a coy white woman;  it is too humanized to be properly believable, but this is the future, so I guess an artificial intelligence can have an interracial crush now. They had to cram this crap in somewhere, so Damon Poitier ridiculously schemes with her to off his commanding officer, and calls her “Baby” on more than one occasion. However, in a pleasingly sexist kind of way, she is still just an object (a talking box featuring some lights and a computer chip, actually) and so can easily be repossessed by the white man by the end of the film.

The end of Hunter / Prey leaves a lot to be desired. Having laid its metapolitical cards on the table as a biologically determinist, racial annihilation tale, Collora and crew clearly could not resolve it. Centauri-7 and Oran part ways, presupposed by the film as moral equivalents, even though this idea has already been completely torpedoed by earlier scenes. Centauri-7 is a weak-minded and impulsive simpleton — he flipflops between being a racial loyalist when it comes to blowing up other peoples, and a racial traitor when his resentment towards his superiors gets the better of him. Unlike the original Planet of the Apes, where the “aliens” were explicitly less intellectually-gifted members of the animal kingdom, Hunter / Prey and all other contemporary sci-fi can only go to the point of showing rather than telling the audience about racial differences. Nonetheless, as Sylax the bounty hunter comments, “Nobody likes Sydonians.”

Despite its loose ends and at times threadbare content, Hunter / Prey is brisk and entertaining. The previous year, 2009, had seen two major films of the multiculturalized box-office sci-fi genre: District 9 and Avatar, both of which were laden with implausible anti-white tropes. Hunter / Prey is a refreshing contrast in its moral seriousness. As a piece of filmmaking, it’s an outstanding accomplishment that makes use of physical props and attempts to achieve captivating results. Collora comments that “there’s something that’s been lost from the brilliant films of the late ’60s and ’70s in contemporary sci-fi and fantasy, and I want to try and bring that back.” For Star Wars fans looking for fare more like the original Star Wars, this is it. Thematically, it returns sci-fi to where it belongs as a genre: produced by, for, and about white men overcoming the dangers of a threatening universe. 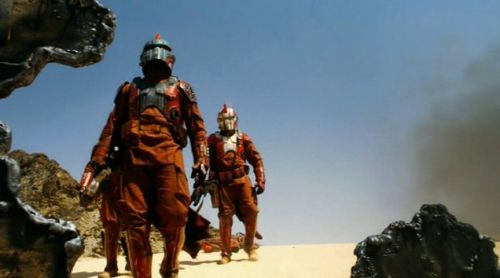 It’s a useful reminder that independent filmmaking need not be constrained by either modern speech rules nor fashions, and that even with a modest sum, creative ambition and determination can produce a work to which the culture at large will respond. Clark Bartram’s Batman, in Collora’s previous eight-minute short, Batman: Dead End, brought a new and believable vision of both the Bat and the Joker to Comic-Con (with Batman donning incredibly fascistic leather gloves to beat up a babbling, narcissistic Joker) which translated in a masterfully comic way to the Bigger (auditorium) Screen, and raised the awareness and hype needed to make Hunter / Prey possible as a movie.

Hunter / Prey itself, whilst not well-known, definitely pulls the zeitgeist away from superhero flummery and towards a harder and more sincere science fiction of the last man standing — more in keeping with the loving fascist pastiche of Starship Troopers than the present day Kosher-Bosher slop served up to “geekdom” audiences. The excellent “Making Of” feature included with it documents the admirable lengths to which the filmmakers went in order to fulfill Sandy’s creative vision. Hunter / Prey shows what can be achieved with ingenuity and dedication, and there is little more inspiring than intrepid heroism and success against the odds.