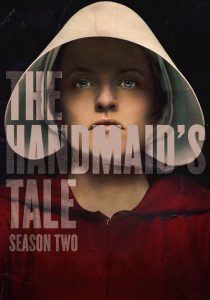 The Handmaid’s Tale (Season 1) is based on the book of the same name that is both a femi-porn rape fantasy like Fifty Shades of Grey and a hard, alarmist look at the drop in the fertility of high class, intelligent, white women. The fact that the book was published in 1985 — after The Pill, the sexual revolution, and the divorce revolution — gives strength to this interpretation. I have reviewed Season 1 here.[1] [2]

There is no sequel to the book this series is based on, so Season 2 is free to go in any direction. The Second installment continues exactly where the first season left off with a standard psycho-sexual horror[2] [3] scene that women seem to like in their fiction.[3] [4] The Handmaids, wearing a scold’s bridle, are threatened to be hanged at the post-apocalyptic Fenway Park. They aren’t hanged, of course, that’d end the series, but I digress.

Before proceeding further, I must say that all feminist cultural works, from Star Wars Episode VIII to some sort of show-my-underarm-hair at a University event, suck. There is no way around it. Feminist comedy isn’t funny, feminist paintings aren’t beautiful, feminist politicians have no real insight into their nation’s problems, and feminist stories have no real ability to see all sides of an issue.[4] [5] Feminist cultural works are also not self-aware or self-reflective. Season 2 is actually a rape/bondage fantasy story while pretending to be about “female empowerment.”

While Season 2, is a feminist story with all the problems of the above, it does have some excellent features. The Cinematography is done by Colin Watkinson, and it’s first rate. For example, when our heroine goes out into the snowy woods of New England, there is only one set of footsteps behind her. The sets and lighting are superb. Furthermore, the world created by the producers is rich with cultural rituals. The funeral scene for the slain handmaids is very well done as well as the group wedding. If there is any problem, the ambience of the sets seems like Ontario, not Massachusetts. The accents are Canadian[5] [6] not New English.[6] [7] The architecture and sunlight also feel different. (It’s noticeable, but hard to put a finger on.) The entertaining series Orphan Black is the same way, it’s North America, but not the United States . . .

There are some good storytelling features which explore reality in a way outside of feminist dogma. When Offred (Elisabeth Moss) attempts to escape she becomes an object, a princess if you well, helped entirely by men. (The season’s only burst of self-awareness.) Offred’s adultery in the time before the Republic of Gilead is also shown. Indeed adultery really hurts a great many people. The backstory of Offred’s rival Serena Joy’s (Yvonne Strahovski) barrenness and political activity is ably shown. Interestingly, it is clear that that the antifa/leftist shut-downs of Right-wing speakers has made it to the consciousness of the cultural-creator class.

Other than the femi-porn rape fantasy, the series is also Oppression Porn for the Obama Coalition. Gays are hunted down and killed, and SWPLs flee to Canada, just one step ahead of “The Guardians.” There is also a well-done visitation of “the colonies.” The scenes there are reminiscent of Renaissance paintings of the Black[7] [8] Death.[8] [9] Furthermore, there is a scene with Jews speaking Hebrew in “the colonies” while there is a marriage ceremony with the “oppressive” leadership of the Republic of Gilead singing Onward Christian Soldiers. It’s a clear shout out to the lachrymose/Holocaust view of Jewish history that so many activist Jews genuinely believe. There are also a great many interracial marriages and friendships that are portrayed as natural rather than the forced relationships they really are. In short, Season 2 is a disappointing metapolitical propaganda work for the Obama Coalition just in time for the mid-term elections.

One thing, I’ve noticed is that heterosexual relationships are shown as unloving, warped, or oppressive while homosexual relationships are excitement itself. To a lesser extent this is also true in the Orphan Black. Art follows cultural change. The divorce revolution has scarred a great many people so cultural creators are displaying their childhood trauma. However, there is a problem here too. Homosexual marriages are still new so the data is still coming in, but it is likely that they are even more unstable than heterosexual marriages. One disappointment in Season 2 is how the fictional arranged marriage works out between Nick (Max Minghella) and Eden (Sydney Sweeney). The marriage, of course appears to come apart (there is still Season 3 to come . . . ), but I couldn’t help but wonder if a marriage arranged officially by the State, but in reality, by conspiring older mothers is better than the modern “dating scene” way of finding a mate. I suspect that arranged marriages planed out by aunts and moms can’t be worse that the present situation.

One further thing I wish to add regarding Season 2 being Oppression Porn for the Obama Coalition is how the subject of rape is treated in the show vs. in reality. In the show, one of the Handmaids kick a commander after he collapses due to a post-coital heart attack. Here, the victim gets revenge on the actual perpetrator. In the real world, the feminist movement is one based on resentment, not rationality, so those punished vs. those actually guilty don’t connect. The feminist movement ignores very real problem of rape perpetrated by black athletes,[9] [10] but imagines rapes by fictional white men.[10] [11] It also doesn’t mention the sexual assault epidemics in Sweden and Germany due to the refugee invasions.

Ashley Judd’s “Nasty Woman”[11] [12] speech during the 2016 “Woman’s March” is also an interesting example of feminist resentment causing misdirection. Judd was protesting the implicitly white Trump victory in the 2016 election, but her actual sexual assault tormentor was the Hillary Clinton mega-supporter Harvey Weinstein (Jewish).[12] [13] The “pussy hat” thing during the “Woman’s March” is also strange, more of a sexual display than a march for a rational political movement with rational goals.

In short, The Handmaid’s Tale Season 2 is a big disappointment. If one is making oppression porn for the Obama Coalition, then one isn’t saying anything really meaningful. It’s a bit like the cultural products of the Evangelical Protestant movement. Instead of a goal of making great stories, songs, etc. the art must somehow get to the pre-existing message as its endpoint. As a result, it’s all garbage. This is unnecessary, the wildly successful Game of Thrones series explore ideas and humanity from nearly every perspective. In light of that it is possible to make The Handmaid’s Tale Season 2 into a really interesting story. Unfortunately, Season 2 winds up as a mix of a Take Back the Night rally and Brokeback Mountain. The Handmaid’s Tale has been picked up for a third season, hopefully something might change.