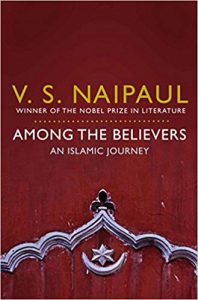 The further to the political Right one gets, the easier it is to connect with the mentality and ideas of those of a Hindu background while becoming increasingly alienated from the Bible’s Old Testament and its vicious cast of desert-dwelling thieves, murderers, perverts, and swindlers. One example of this phenomenon is the late V. S. Naipaul’s (1932–2018) look at one prickly Abrahamic faith of the desert: Islam, entitled Among the Believers (1981).

Naipaul had a unique background. He was of Hindu Indian origins and grew up in the British Empire’s West Indian colony of Trinidad and Tobago. Naipaul wrote darkly of his region of birth, stating, “History is built around achievement and creation; and nothing was created in the West Indies.”[1] [2] His gloomy take on the region is a bit inaccurate; the racially whiter places such as Cuba have produced societies of a sort of dynamism. Cubans did field a large mercenary force on behalf of the Soviet Union in Africa late in the Cold War, and the mostly white Costa Rica is a nice place to live. But Haiti is a super-ghetto of Africanism. In some cases, the West Indians can’t even give themselves away. At a time when the American people were enthusiastic for expansion, the US Senate bitterly opposed the Grant administration’s attempt to annex what is now the Dominican Republic. Who wants to take over Hispaniola’s problems?[2] [3] Naipaul’s prose is so good that he will be extensively quoted throughout this review.

In Among the Believers, Naipaul takes a look at the nations where Islam dominates the culture but where the populations are not Arabs. He wrote this book in the immediate aftermath of the Iranian Revolution, so we are seeing what happens when a people with a rich heritage attempt to closely follow the religion of their alien Arab conquerors. What you get is a people at war with themselves, and a people who, to put it mildly, turn away from the light of reason. He can express this in civilizational terms as well as individually. For example, in highly readable prose, Naipaul writes of a Malay woman who courts a “born again” Muslim man. Before she got with him, the young lady danced, dived, and went camping, but afterwards she took to the hijab and the drab long gowns, “and her mind began correspondingly to dull.”[3] [4]

When one reads Naipaul’s work, one comes to appreciate Islam; not the sort of pretend appreciation that virtue-signaling liberals have right up until a group of fanatics run them over with a car and then knife them to death as they lie injured [5], but an appreciation of just how terribly the Islamic worldview impacts all of society. After reading this book, one can see that Islam is the following:

Quite possibly the most interesting part of this book is Naipaul’s account of the Arab conquest of what is now Pakistan, but which was then called the Sind. Starting around 634, the Muslim Arabs began attempting to conquer the region. They launched at least ten campaigns over seventy years; all were unsuccessful. However, the Arabs eventually won. During the time of the Arab menace, the people of the Sind were weakened by a prophecy of doom, and palace intrigue had weakened their political elite. The Sind people were also awed by the apparent unity and discipline of the Muslims. The common people surrendered in droves, and the Sind’s King was killed in an avoidable death, or glory battle.

For the people of the Sind and their Hindu/Buddhist culture, the Arab conquest was a disaster. “At Banbhore [13], a remote outpost of the earliest Arab empires, you walked on human bones.”[10] [14] However, the Pakistanis today cannot admit to themselves that they lost their traditional culture. The story of the Arab conquest is told in a work called the Chachnama. Naipaul argues that the Chachnama is like Bernal Díaz’s great work, The Conquest of New Spain, except for the fact that the Chachnama’s author was not a soldier in the campaign as was Bernal Díaz; it was written by a Persian scribe centuries after the event. Like all things in Islam, the insights offered by the Chachama are dull at best, and “The intervening five centuries [since the publication of the Chachama] have added no extra moral or historical sense to the Persian narrative, no wonder or compassion, no idea of what is cruel and what is not cruel, such as Bernal Díaz, the Spanish soldier, possesses.”[11] [15]

The arrival of Islam to the Sind is the disaster which keeps on giving. Pakistan’s economy [16] lags behind India’s, although India has a large population of low IQ, low-caste people. Pakistan also cannot produce world-class cultural works like India does. There is no Pakistani version of Bollywood. The best thing the Pakistani government can do is to provide exit visas for its people to go and work elsewhere, as well as advice on the immigration laws of receiving countries.

Perhaps because Naipaul is from the West Indies – a Third World region which has long touched the more dynamic societies of the white man – he is able to so accurately describe the disaster of Third World immigration, especially as it applies to Pakistan and its pitiable people. He is worth quoting at length:

The idea of the Muslim state as God had never converted into anything less exalted, had never converted into political or economic organization. Pakistan – a thousand miles long from the sea to the Himalayas, and with a population of more than seventy million – was a remittance economy. The property boom in Karachi was sustained in part by the remittances of overseas workers, and they were everywhere, legally and illegally. They were not only in Muslim countries – Arabia, the Gulf states, Libya; they were also in Canada and the United States and in many of the countries of Europe. The business was organized. Like accountants studying tax laws, the manpower-export experts of Pakistan studied the world’s immigration laws and competitively gambled with their emigrant battalions: visitor’s visas overstayable here (most European countries), dependents shippable there (England), student’s visas convertible there (Canada and the United States), political asylum to be asked for there (Austria and West Berlin), still no visas needed here, just below the Arctic Circle (Finland). They went by the planeload. Karachi airport was equipped for this emigrant traffic. Some got through; some were turned back.[12] [17]

Once they got there:

. . . the emigrants threw themselves on the mercies of civil-liberties organizations. They sought the protection of the laws of the countries where the planes had brought them. They or their representatives spoke correct words about the difference between poor countries and rich, South and North. They spoke of the crime of racial discrimination and the brotherhood of man. They appealed to the ideals of the alien civilizations whose virtue they denied at home.[13] [18]

Naipaul shows that Islam is a tremendous, though retarding, metapolitical force that works its way into all areas of human societies: the law, philosophy, medicine, and even city planning. He shows the power of its simple theology over less intelligent, Third World minds. He shows its dark, violent core. Once the virus of Islam infects a society, whatever higher culture that society had is destroyed. Islam’s ultimate endpoint is a world of barren desert dunes squabbled over by uncreative, violent fanatics. In short, Islam is so powerful because it is fortified by its own failures and contradictions rather than defeated by them.

Naipaul’s criticism of Islam has drawn its own critics, such as Salman Rushdie [19] and the late Edward Said [20], but in light of the Global War on Terror and the rapid descent of many Islamic lands into even deeper, darker forms of barbarism, they have been given extended life by the imported lights of the white man’s science and technology, and Naipaul has become something of a prophet.

In conclusion, from the perspective of the white man who believes in civilization, Islam must be resisted by all means. Furthermore, “civil rights” is a tool of white displacement. Dismantling “civil rights” agencies is critical. Of the greatest importance, though, is to break free of the tremendous sense of guilt and self-loathing in the Western world. As long as whites continue to worship Emmett Till, Martin Luther King, and the rest of the pantheon of non-white idols, the dull, slack society of Islam will punch above its weigh.

Don’t let your nation become one of those counted as among the Believers.

[2] [22] Unfortunately, the US did purchase the Danish Virgin Islands and capture Puerto Rico. The 2017 hurricane season was the scene of two vicious storms: one devastated Houston, Texas, which recovered rapidly. The other storm destroyed Puerto Rico, which took months to recover basics such as electricity.

[4] [24] I’ve had to condense the prose here to generalize what Naipaul is saying about several Iranians during the Islamic Revolution. See p. 80 for the full quote in context.