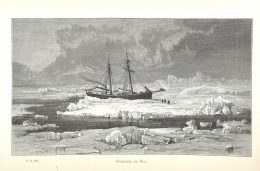 Germany undertook two Arctic expeditions from 1868 to 1870. The prospects of heroic adventure, national glory, and scientific advancement were all motivating factors. Polar exploration was hailed as a demonstration of Germanic courage and fortitude, as well as of the strength of German science and technology. Polar ventures held a similar significance for other nations as well, but this was particularly the case in Germany on the eve of unification.

The catalyst for pursuing Arctic exploration was an article written in 1866 by the German cartographer August Petermann entitled “Die deutsche Nordfahrt: Aufruf an die deutsche Nation” (“The German Northern Voyage: Appeal to the German Nation”), urging Germans to support an expedition to the Arctic. The title was a deliberate allusion to Fichte’s Reden an die deutsche Nation (Addresses to the German Nation), one of the landmark texts of German nationalism. “What a triumph for Germany and the German navy,” Petermann wrote in one article, “if the seas and lands beyond 80° north latitude received a German nomenclature, if a German mariner first advanced there, if a German keel first furrowed the floods of the North Pole!”[1] [2] Petermann also stressed the scientific advancements that polar exploration would bring.

The man chosen to lead the first German North Polar expedition was Karl Koldewey, who declared, according to Petermann, that he was willing “to sacrifice all his hopes to take part in the North Pole expedition, even if it costs his life, since one knows one dies for the renown of the German name.”[2] [3] The team departed from Norway in the summer of 1868 on the ship Grönland with the intent of mapping the coast of Greenland and attaining “the highest possible latitude.”[3] [4]

The first objective was thwarted by thick ice sheets that obstructed the ship’s passage. Koldewey thus sailed to Spitsbergen, where he and the crew mapped the island’s northeastern coast. The ship managed to reach 81° 5’N – the highest latitude ever attained by boat. The expedition overall was a modest success, but it prepared the way for the next expedition and piqued the general public’s interest in polar exploration. Koldewey wrote that it was “success enough to have held upright in every respect the honour of our young German flag.”[4] [5]

Koldewey and Petermann soon began planning and raising funds for a second expedition. One fundraising appeal distributed in Berlin read:

Fellow citizens! The question whether the sea around the North Pole of our globe bristles with eternal ice, or if there too creative nature has spread life on unknown shores, is still unsolved. . . . German explorers have already brought high honor to the German name in all the zones of our globe, but in the solving of this question Germany has recently played little part. Thanks to the national rebirth of our fatherland, it is appropriate that it here takes its place among the other seafaring nations. The affair is a truly German matter, since the first exploratory voyages in those icy districts of the North Pole proceeded from Germany more than eight hundred years ago, and the German Hansa tested in the northern seas her then still young powers.[5] [6]

The second German North Polar expedition was also led by Koldewey. The main exploratory ship was the steamship Germania, which was accompanied by a smaller schooner, the Hansa, commanded by Friedrich Hegemann. The crew departed from Bremerhaven on June 15, 1869. The crew’s departure was celebrated as a public festival; King Wilhelm I and Otto von Bismarck were in attendance. The politician Alexander Mosle addressed the explorers thus: “Through you, knowledge of the North Polar sea shall be made accessible to all peoples, to the honor of the fatherland, to the honor of the young German flag, to the honor of German science and German navigation.”[6] [7]

The two ships were separated on August 20 due to a misreading of a signal. The Germania continued steering northwestward until it encountered a blockade of ice and anchored at Sabine Island on September 13. The crew prepared to overwinter at the island and began setting up observatories. Over the course of the next ten months, they collected a significant amount of astronomical, geomagnetic, and meteorological data. They did not stray from their routine even in the face of violent storms, extreme cold, and other obstacles. They also embarked on arduous sled journeys in order to explore various islands on the coast of Greenland.

The crew departed the island on July 11, 1870. A pack of ice once again blocked the way north, so they headed south. In doing so they discovered a major fjord system of northeast Greenland, which they christened the Kaiser Franz Josef Fjord. Koldewey wrote of its sublime beauty: “An unknown land, the actual interior of Greenland, opened itself ever more beautifully and imposingly before our astonished eyes. Glaciers, cascades, waterfalls came down from the ever-ascending mountains.”[7] [8] The Germania returned to Bremerhaven shortly thereafter and arrived on September 11.

Meanwhile, the Hansa had become trapped in the ice. It was slowly crushed and finally sank on October 22. The crew survived by salvaging some provisions and constructing a shelter built from coal bricks, with snow and water as mortar, upon a raft of ice. They drifted southward along Greenland’s eastern coast. In due course the floe upon which their shelter rested broke into several pieces. Another storm followed and destroyed the shelter itself. The crew were left stranded on a small block of ice for the entire winter, enduring terrible conditions and frigid weather.

It is a miracle that every member of the crew survived, and furthermore that the crew overall maintained a buoyant disposition and a sense of law and order. Hegemann wrote, “Throughout all the discomfort, want, hardship, [and] danger of all kinds, the frame of mind among the men was good, undaunted, and exalted.”[8] [9] Like the men of the Germania, they continued to collect scientific data regularly despite the hardships they faced: “We were always actively employed, and daily order and regularity were rigidly kept up.”[9] [10]

The crew finally encountered open water in June and made their way to the Danish settlement of Friedrichsthal. From there they were able to return to Europe. The Hansa returned at about the same time as the Germania. They returned amid the Franco-Prussian War, during which German nationalism had reached a high point. Mosle praised them upon their return: “We are now able to look with pride and joy on the achievements of the sailors and scientists. They have gloriously demonstrated German nautical proficiency, German persistence and German striving for the enrichment of science.”[10] [11]

German audiences were particularly captivated by the saga of the shipwreck of the Hansa, whose story “was in every mouth.”[11] [12] Their survival was attributed to Teutonic bravery and stoicism, and they were hailed as “true Germans.”[12] [13] One crew member stated that “only German tenacity, German discipline could have borne these dangers.”[13] [14] “Just as on the bloody field of honor in France, so Germany gained a magnificent victory on the peaceful field of science in the North,” one author wrote.[14] [15] The official account of the expedition urged young German readers to remember the mission “begun by German men in the greatest spirit of sacrifice and under the most difficult conditions” so that they might “bring honor to the German name.” The authors added that “in a strong healthy nation, deeds repeatedly led to new deeds, and it will be necessary and appropriate for Germany to never rest on laurels won.”[15] [16] Popular books for young people like Heroen der Nordpolarforschung also retold the story of the Hansa.

The expedition was a success from a scientific point of view. The findings from the expedition constituted an important scientific contribution and were analyzed and published by the Bremen Committee for the North Polar Journey in a 936-page volume. The expedition was also responsible for a number of geographical discoveries, including Kaiser Franz Josef Fjord, Petermann Peak, Bismarck Cape, Koldewey Island, King Wilhelm Land, and Payer Cape.

The impetus for polar exploration waned as the German Empire turned its attention to colonial expansion, and about thirty years passed until Germany embarked upon another polar expedition, this time to Antarctica, at the urging of Georg von Neumayer. This expedition was a failure in terms of what it set out to achieve, though it was successful from a scientific standpoint and contributed substantially to the scientific body of knowledge about Antarctica. The second Antarctic expedition was generally unsuccessful, for various reasons. A third Antarctic expedition followed in 1938, and succeeded in mapping New Swabia. 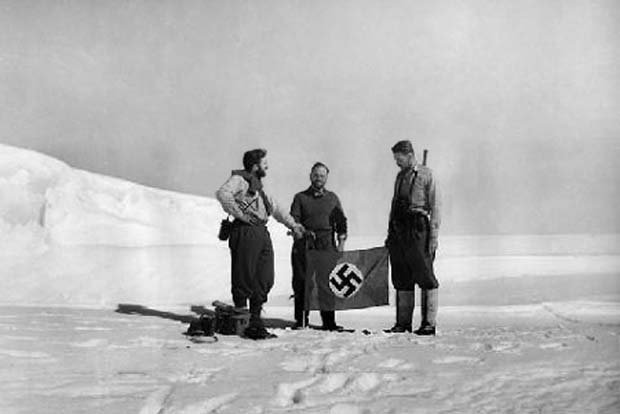 Germans at New Swabia in Antarctica, 1938

Germany embarked on two more Arctic expeditions: the polar flight of the Graf Zeppelin on July 24, 1931, and the German Greenland Expedition led by Alfred Wegener. The advancement of science was the leading motive, but both ventures also had nationalist undertones. The Zeppelin was seen as a “symbol of German greatness and hope”[16] [18] and helped restore national pride in the aftermath of the losses Germany suffered during the First World War. Of the Greenland expedition, historian David Thomas Murphy writes that “the deliberations of the Greenland commission were permeated by a sense that German national pride demanded continued participation in the great Western cultural work of opening the polar world.”[17] [19] The expedition was a heroic undertaking and resulted in the collection of a large amount of meteorological and glaciological data. Wegener died during the expedition, and was hailed as a national hero.[18] [20]

German polar explorers are generally overshadowed by their British, American, and Scandinavian counterparts. They failed to attain any major firsts. Germany’s Antarctic expeditions in particular suffered from bad luck and failed to achieve their primary goals. Murphy also attributes the relative obscurity of German explorers to the fear of celebrating German achievements in light of Hitler’s legacy. They are worthy of recognition; they demonstrated great courage in their endeavors and made many contributions.

The poles are no longer terra incognita; today it is outer space and Earth’s oceans that remain to be explored. But exploration has taken a back seat in the modern era. Dreams of exploration have been sacrificed on the altar of racial integration and political correctness. It is hard to imagine a fractured and racially divided country like modern America uniting in the manner in which all of Germany came together to support the German North Polar expeditions, “to unite the strengths of German scholars and German mariners, to attempt a great deed.”[19] [21] These expeditions illustrate that the common sense of purpose afforded by national identity is what makes feats of exploration possible.

[1] [22] David Thomas Murphy, German Exploration of the Polar World: A History, 1870-1940 (Lincoln: University of Nebraska Press, 2002), p. 20. ” . . . floods of the North Pole”: Petermann subscribed to the Open Polar Sea theory, which erroneously held that the North Pole consisted of an ice-free body of water.

[16] [37] Murphy, p. 112, quoting Hugo Eckener. Eckener was a vocal opponent of National Socialism, but he seems to have been a conservative nationalist with monarchist sympathies. Zeppelins bore the flag of the German Empire until the Zeppelin operation was nationalized under the Third Reich.

[18] [39] An interesting fact relating to Wegener is that the National Socialists were the first to recognize the import of his contributions, while scientists abroad were denouncing the theory of continental drift as “Germanic pseudoscience.”