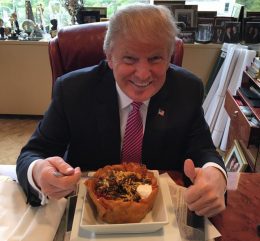 The Crime of Passion

Peculiar that, in these progressive times,
As ratified by the Almighty State,
The more impersonal cold-blooded crimes
Are deemed less heinous than those done from hate.

No more committees,
No more discussions,
No more golden rules,
And no more concussions;

Just empty cities
Fallen in ruins,
Where the fractured skulls
Are stone-deaf to nuance.

The baby misses milk.
A shame his mother-love
Is dry, of stranded ilk
Unkept by God above
And skimmed so early from the cradle,
Herself a trothless lonesome dove
Too poor to try, a public ladle
Of broth her fated crumb to covet.

Few birds obliged to fly by night
Have found a perch near the Big Dipper.
The Spirit in the Sky
Does not bend down to cry
Or urge a son to learn aright
And keep the fatherlode well zippered.

Often we are very serious.
At other times our faces get all smiley.
That’s what happens when the three of us—
Just me and Dr. Phil and Bill O’Reilly—

Have a drink together on our lunch
Break. Used to be, when news developed slowly
And contentment ruled at home, we’d munch
Tortilla chips with lots of guacamole

Till they served the tacos, bringing on
Another round of conversation
All about the constant marathon
Of gaunt illegals streaming from the nation

To our south. “We must communicate
And channel our humanity,” Phil stated.
Bill said, “Pins are showing on your pate,
And you’re not looking out for me.” I waited.

After each of them had said his piece,
I cleared my throat and put in my two cents’ worth:
“Rather than provoke the Thought Police,
Let’s skip the food and stick to liquor henceforth.”

Chardonnay is good enough for Phil,
Who’s not inclined to wink at overthinking.
Whiskey better fills the bill for Bill,
Which he will never let us catch him drinking.