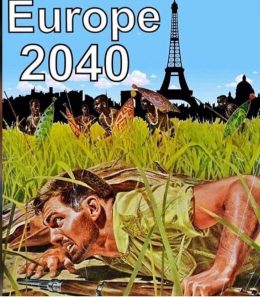 If present demographic trends are not halted and reversed by White Nationalism, the white race will become extinct [4]. Eventually. In the long run.

But this presents a problem. It is difficult to justify making fundamental political changes today in order to avoid catastrophes that will only unfold in the far future. Such a program appeals only to the small percentage of people who have the foresight to think about the distant future and the altruism to want to make it better, even if they will not personally benefit.

But most people are short-sighted and selfish. They think only of the short run and have very weak senses of responsibility, even to their own children. Their standard response to problems like white extinction is, “It will never happen during my lifetime, so I don’t have to worry about it.”

Nevertheless, we can take heart from the fact that the environmental movement faces the exact same problem but has been enormously successful. Moreover, small groups of highly idealistic and altruistic people make history all time, often by exhorting people to ignore short-term self-interest for greater long-term goods.

Indeed, such elites might be the only ones who actually make history. After all, the short-sighted and selfish are easily outsmarted. Long games beat short games, even in the short run. And idealists who are willing to sacrifice themselves have a systematic advantage over the cowardly and the selfish, other things being equal.

But even the most idealistic movements have to find ways to move the masses through appeals to short-term self-interest. Fortunately, diversity will cause a great deal of ruin in white countries before our race reaches extinction. Thus White Nationalists can appeal both to the long-term threat of white genocide and the short-term negative consequences of increasing diversity.

Furthermore, our people don’t really need to imagine the consequences of whites becoming a minority, because there are countless cities, towns, and regions where that has already happened. You don’t need a time machine to visit a majority non-white future. You simply need a plane ticket to Detroit or Los Angeles or London, where the future that awaits us all has already arrived.

And these are mere pockets of blight within majority-white, First World countries. To appreciate what life will be like once whites are a hated and powerless minority within a majority non-white, Third World country, we only need to look at the fates of whites in Rhodesia and South Africa.

The idea that our future will be like the white minorities of Latin America is wishful thinking, for those societies are essentially white supremacist, and if whites in Europe and North America had such attitudes, we would not be facing race replacement in the first place.

The most convincing appeal to short-run self-interest is to stress the systematic anti-white inequities built into the current system. In the game of multiculturalism, whites can only lose.

Imagine multicultural politics as a poker game. Each ethnic group has a place at the table and a certain number of chips, representing its collective wealth and power. Whites currently have the largest stack. But every group gets to play a wild card, “the race card,” except for whites. No matter how big our initial advantage might be, if we play by those rules, we can only lose.

Non-whites, however, get to play by different rules. When they play the race card, that simply means that they work as teams. They demand that individualists give them a fair shake in every transaction, and individualists oblige. So if non-whites offer the best product, the best price, or the most meritorious candidate, individualists hand them the prize.

But when the situation is reversed and an individualist offers the best product, price, or candidate to a non-white, the latter will give preference to members of his own tribe wherever possible, regardless of merit, regardless even of short-term self-interest. This is because he thinks in terms of maximizing the collective power of his tribe, which to him outweighs the inconveniences of employing a less competent cousin.

The tribal strategy can also be likened to parasitism. A parasite tribe is not part of a larger body politic. Instead, it is a distinct community that lives within the larger community, a host population which the parasite tribe victimizes to its own advantage.

As long as whites continue to play this rigged game, we will continue to lose, until we have surrendered our wealth, our power, our country, and any control we might have over our destiny to non-white tribes—or we kick over the table and refuse to play a game rigged against us.

But how? There are only two possible solutions.

First, we can somehow convert non-white tribalists into individualists. But this will never happen, for two reasons.  (1) The present system is advantageous to tribalists, so why would they throw away a winning strategy? Why would they want to adopt a moral code that would disarm them to the same sort of exploitation by some other non-white tribe? Why would they want to be losers like us? (2) White societies gave up even trying to assimilate non-white immigrants when we embraced multiculturalism and open borders.

Second, whites can adopt a tribal strategy. An individualist society will inevitably collapse if it is hacked by parasite tribes. To protect themselves, individualists must think of themselves as a group, with distinct interests that clash with those of other groups that live by different codes. In those clashes, whites need to take our own side. Even if we think of white identity politics as merely a temporary expedient to restore a meritocratic, individualist form of society, we need to remove parasite tribes from our societies and prevent new ones from entering, which requires that we drop the dominant taboo against identity politics for white people.

This brings us to the problem with conservatives: they conserve nothing. In the long run, White Nationalists will have to convert people from the whole of the political spectrum, Left, Right, and center. But in the short run, our natural constituency is people on the Right, who keep voting for conservative parties. If you break voters down by race, center-Right parties in every white country are increasingly becoming the parties of indigenous whites. They are implicit white identitarian parties, but their leaders are absolutely opposed to being explicit about this fact, much less embracing it.

The Left has spearheaded open borders and race-replacement immigration policies, and they receive the vast majority of non-white votes. (For instance, in the 2016 US Presidential election, Hillary Clinton won 88% of black votes, 69% of Asian votes, and 66% of Hispanic votes—and she was an exceptionally weak candidate.) The Left is, moreover, quite open about why they are committed to creating a new, non-white majority: whites consistently vote for conservative parties; once whites are in the minority, conservative parties will become unelectable, and Left-wing values will triumph. In town after town, district after district, state after state across the US, the rising tide of color is drowning conservatism, establishing a Left-wing one-party state.

The mainstream conservative response to this blatant plan to demographically swamp and disenfranchise their electorate is a complex mixture of delusion, cowardice, and treason.

Second, to escape from the charge of identity politics, conservatives insist that their goal is not to conserve a particular people—Americans, Germans, etc.—but rather to promote a list of abstract values. These values, moreover, are supposedly universally valid, which means that they should appeal equally to people of other races and nations. This leads to the absurd conclusion that if Americans were completely replaced by Mexicans, this would be a triumph of conservatism as long as the new bronze nation professed belief in el Sueño Americano. (That’s “the American Dream” to you Gringos.)

It is easy to understand why the Left promotes a taboo on white identity politics: Leftists know it is the only thing that will save whites from demographic replacement. It is, however, hard to understand why the Right clings to this same taboo. I used to think that conservatives were unprincipled. But I was wrong. They will happily follow the taboo on white identity politics regardless of the costs. Unfortunately, this rule was rigged by their enemies to destroy them.

The suicidal stupidity of mainstream conservatism is an enormous opportunity for White Nationalists to appeal to the short-term self-interest of large numbers of whites.

Our message is simple: as whites become minorities in our own homelands, it will be impossible for conservative politicians to win elections. Therefore, it will be impossible to implement conservative policies. Therefore, the things that conservatives love will disappear. In the United States, that means limited constitutional government, fiscal responsibility, private enterprise, freedom of speech, freedom of religion, gun rights, etc. These values have tenuous enough footholds even in white countries and are almost non-existent in non-white countries. If we wish to preserve these values, we need white identity politics today.

White liberals have taken the lead in promoting white dispossession, thus they will be most resistant to white identity politics. But even they will come around in the end. The liberal strategy is to defeat conservatives by displacing them with non-white immigrants who will vote for the Left. Once white demographic displacement creates a permanent liberal majority, liberals believe can ensure the final triumph of religious tolerance, women’s rights, drug legalization, abortion rights, gay rights, free healthcare, funding for the arts, environmentalism, organic foods, walkable communities, etc.

But none of these values are conspicuous in Latin America, Africa, India, or the Muslim world, which are the primary sources of race-replacement immigration. Do white liberals really think that they can dictate policy to these people forever, even after non-whites have become the majority? That is a highly dubious assumption. Indeed, it smacks of an unconscious form of white supremacism.

Why would a rising non-white majority continue to uphold the values of white liberals, who have given their societies away? Wouldn’t the new majority instead hold white liberals in contempt and seek to remake formerly white nations in the image of their homelands, where white liberal values have no place? If so, then the things liberals love will also disappear along with the white majority.

A racially conscious Left is not impossible. We know this because it has actually existed. For instance, in the United States, Canada, Australia, and New Zealand, Asian immigration was promoted by capitalists whereas Asian exclusion was promoted by the labor movement.

The key to winning over white conservatives—and eventually white liberals as well—is convincing them that the things they value are not universal but particular to white people. We will never have either American capitalism or a Scandinavian welfare state if the people who created these systems are replaced with non-white invaders. All white politics—Right or Left—is white identity politics in the end.