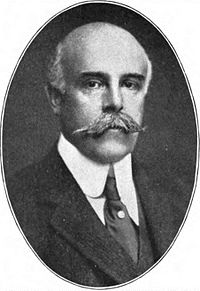 The early conservation movement in America was closely intertwined with support for scientific racism, eugenics, and restrictions on immigration. Both environmental conservation and eugenics were part and parcel of Progressivism. This article will provide brief biographies of five notable conservationists who were also race realists and eugenicists. Theodore Roosevelt is the most obvious example, but there were several others, including Madison Grant, Henry Fairfield Osborn, Charles M. Goethe, Joseph Le Conte, and David Starr Jordan.

In addition to authoring The Passing of the Great Race and lobbying for restrictions on immigration, Madison Grant was an important member of the early conservation movement. He helped create the Denali, Everglades, and Glacier National Parks and also helped found the New York Zoological Society, the Bronx Zoo, the Save-the-Redwoods League, and the American Bison Society.

Grant also wrote books on a variety of zoological topics, including The Caribou, The Origin and Relationship of the Large Mammals of North America, Saving the Redwoods, The Rocky Mountain Goat, and Early History of Glacier National Park, Montana.

The New York Times wrote in its obituary for Grant that “the preservation of the redwoods, of the bison, of the Alaskan caribou, of the bald eagle . . . of the spirit of the early American colonist, . . . and of the purity of the ‘Nordic’ type of humanity in this country, were all his personal concerns, all products of the same urge in him to save precious things.”[1] [2] 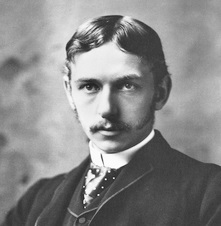 Henry Fairfield Osborn was a paleontologist, geologist, and conservationist. As President of the American Museum of Natural History, he oversaw the construction of dioramas, murals, and dinosaur mounts, making the museum what it is today. He accumulated a significant collection of vertebrate fossils and authorized many AMNH expeditions. As a paleontologist, he led expeditions in the American Southwest and was responsible for naming some dinosaurs, including Tyrannosaurus Rex and Velociraptor.

Osborn co-founded the Save-the-Redwoods League with Madison Grant and John C. Merriam. He was also a member of the Boone and Crockett Club, America’s oldest wildlife conservation organization.

Osborn presided over the Second International Eugenics Congress, which was hosted at the American Museum of Natural History in 1921. He joined Madison Grant in lobbying for the Emergency Immigration Act of 1921 and the Immigration Act of 1924. He also wrote a foreword to The Passing of the Great Race. 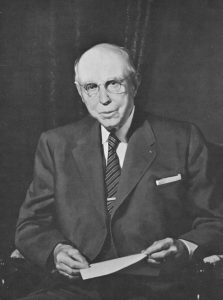 Charles M. Goethe was a conservationist, philanthropist, and eugenicist. He is best known for founding the National Park Service’s interpretive program, which involves park rangers delivering talks on natural history and biology while showing visitors around the national parks. For this the National Park Service gave him the title of “Honorary Chief Naturalist.”

He was an active member of many wildlife conservation societies, including the Sierra Club, Audubon Society, the American Bison Society, and the Wilderness Society. Like Grant, he helped preserve redwoods and helped establish the Everglades as a National Park. As part of his campaign to educate the general public about nature, he helped found the Boy Scouts and funded subscriptions to environmentalist magazines for universities. Goethe himself was an avid naturalist and birdwatcher.

Goethe also served as President of the Eugenics Research Association and founded the Eugenics Society of Northern California. He wrote dozens of pamphlets advocating eugenics. He was strongly influenced by Madison Grant. He admired Hitler and praised him for his enactment of compulsory sterilization. He wrote in 1935: “However much one abhors dictatorship, one is also impressed that Germany, by sterilization, and by stimulating birth rates among the eugenically high-powered, is gaining an advantage over us as to future leadership.”[2] [5] Goethe also sought to outlaw Mexican immigration into the United States. 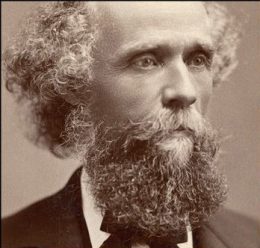 Joseph Le Conte was a physician and geologist. He began his teaching career in the South but moved west due to his dissatisfaction with Reconstruction, citing “a carpet-bag governor, scalawag officials, and a negro legislature controlled by rascals.”[3] [7] He became a professor at the University of California, Berkeley and was responsible for developing their paleontology program and fossil collection. He also wrote a few books, including a textbook on geology. Le Conte served as President of the American Association for the Advancement of Science and the Geological Society of America.

Le Conte was a friend of John Muir, with whom he founded the Sierra Club in 1892. Two years before, Muir had successfully lobbied Congress for the act that established Yosemite National Park in 1890. The Sierra Club was born out of the founders’ desire to protect the Sierra Nevada as well.

The Sierra Club recently renamed the Le Conte Memorial Lodge in light of Le Conte’s views on race. In an article entitled “The South Revisited,” he wrote that ” . . . race antagonism is not a wholly irrational sentiment. It is an instinct necessary for the preservation of the purity of the blood of the higher race.” He also wrote that miscegenation would “debase the higher race” involved and that “the results of such mixture are undoubtedly bad.”[4] [8] Le Conte was not active in the eugenics movement, unlike the other figures listed here, though he did write that “race-improvement” must be carried out “with Spartan firmness.”[5] [9] 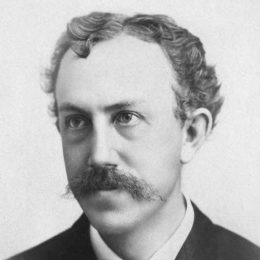 David Starr Jordan was an ichthyologist and eugenicist. He wrote over fifty books, most of them about fish, and served as the President of Indiana University as well as the first President of Stanford University. Many species of fish are named after him.

Jordan was a co-founder of the Sierra Club and a staunch advocate of conservation, writing that “millions of acres have been deforested and destroyed, the best lumber taken, the rest burned, and the soil with it, leaving a scar on the earth to the end of time. We have the right to say that even the private owner shall not murder the forest or burn the soil . . . .” He added: “The forests come first in the problem of conservation, because to protect them we must act now or never.”[6] [11] Jordan also helped save some species of fish from extinction and contributed to the passing of legislation that protected fur seals.

Jordan was a vocal advocate of eugenics and wrote a series of pamphlets entitled The Blood of the Nation intended to promote eugenic breeding among the general public. He helped found the Human Betterment Foundation, whose publication “Sterilization for Human Betterment” had a great influence on Hitler.

He is celebrated for his pacifist and anti-imperialist views, but both were products of his support for eugenics and race realism. He argued that modern warfare was dysgenic, resulting not in the survival of the fittest but in the removal of healthy, strong young men from the gene pool: “The clown can shoot down the hero, and doesn’t have to look the hero in the face as he does so.”[7] [12] In an article entitled “Anti-Imperialism,” in which he argued against annexing the Philippines, Jordan wrote that he held “no objection to national expansion . . . but colonial aggrandizement is not national expansion; slaves are not men. Wherever degenerate, dependent or alien races are within our borders today they are not part of the United States. They constitute a social problem, a menace to peace and welfare.”[8] [13]

Wildlife conservation, eugenics, and racial preservation are more than compatible; they mutually support each other. Madison Grant’s campaign to save the bison was no different from his mission to preserve the white race; he saw both as noble lifeforms that were threatened with extinction. The parallel is apt, as the bison nearly became extinct through commercial hunting, and the white race is likewise threatened by mercantile interests seeking to exploit white altruism for commercial gain.

It is fitting that environmentalism and eugenics/racialism should go hand-in-hand. Both are concerned above all with securing a better world for future generations. In present-day political discourse, environmentalists and White Nationalists are the only two groups that ever invoke the future. They have common cause for the simple reason that whites, more than any other race, possess the foresight necessary to conserve natural resources and protect the natural world. The natural affinity between environmental conservation and racial preservation is best expressed by this quotation from Irving Fisher’s National Vitality, Its Waste and Conservation:

[7] [21] David Starr Jordan, The Blood of the Nation: A Study of the Decay of Races through the Survival of the Unfit (Boston: American Unitarian Association, 1906), p. 70.