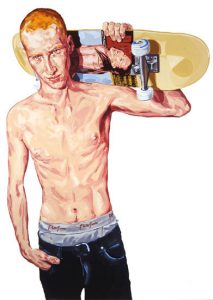 White Identity or ‘Whiteness’ is a fundamental aspect of Skateboarding. My aim is to provide a bridge and reference point for Skateboarders and Alt-Righters to make common cause.[1] Through this, boarders can become aware of themselves as White and under attack from a racial perspective and not merely for their chosen sport — though Skateboarding is, as we shall see, being attacked as being representative of healthy White norms and as a de-facto bastion of White Identity, and to empower boarders to represent themselves in racial solidarity with Whites as a whole through, potentially, infusing Skateboard culture with pro-White ideals, iconography, slogans and so on.

When Skateboarding is properly examined, it should become apparent that while not an integral part of White racial heritage, it is at least a notable part of it, and significant for being both counter-cultural, underground, organic and revolutionary in ideology, whilst simultaneously and unavoidably elitist, “patriarchal” — that is to say, appealing primarily to men and an activity at which White men are naturally dominant and representative of, and healthy. The Skateboarder, from the beginner taking his first tumble to the “Long Distance Pumper” pursuing a record in this more obscure longboard pursuit, is a figure of White innovation, heroicism, and alternately rebellion or altruistic sportsmanship. That the Alt-Right should have a home in Skateboarding (and vice versa) is a moot point of natural consensus that is overdue to be recognized. 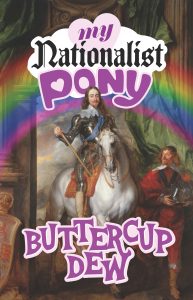 You can buy Buttercup Dew’s My Nationalist Pony here [4]

Skateboarding is undeniably a White innovation. It seems to have been a spontaneous invention across the United States from the end of  WWII to the mid-’50s, a childhood and teen improvisation of roller-skate wheels onto a 2″ by 4″ wooden deck, as at the time the roller-derby was a popular American spectator and suburban leisure sport. Tracing the mechanical lineage of the skateboard back further, it was the 1863 “quad skate” invented by James Leonard Plimpton in New York that transformed existing, rigid skates to ones with an axle damped by a central rubber bushing that allowed the wearer to turn the wheels by leaning. The sweeping curves achievable by riding the boards attracted surfers, and ‘asphalt surfing’ was performed barefoot at its inception. The first commercially available skateboard was released in 1959 by Roller Derby — a flat, red, wheeled plank with the company logo emblazoned on it — and the first shaped professional board (what would be recognized now as a longboard) was produced and sold in 1962 by Larry Stevenson, a Los Angeles Lifeguard, who would go on to pioneer the kickboard and put together the first skateboard competition in 1963.

These garage builder origins of the skateboard are undeniably part of the racial heritage of White America. There might be non-White skateboarders, but skateboarding was irrefutably invented by and for white men and boys, and the primary leap of creating a board without scooter handles occurred a decade before the 1965 Hart-Cellar act that formally deracinated the United States. The manufacture of ur-skateboards by fathers, older brothers, and enterprising boys for leisure use in public, safe suburban spaces is undeniably something that came about as part of a homogeneously White traditional society, because it placed high value on the successful family unit, quality of life and wholesome, communal pursuits, not in spite of it. Prior to 1965 where the moral panic and concern for the safety of skateboarders created a legislative backlash at the local level (within the year of the appearance of the first commercial skateparks and something that resulted in their closure due to prohibitive public insurance costs), skateboarding was socially accepted and commercially encouraged as a normative part of American (White) living. 1965 marked the start of a period of decline for boarding and it was regarded as a passing fad, but Skateboardings’ pioneers had managed to establish it as a pastime with integral ingredients at the childhood level of carefree youth, and at the older teen and adult level of surfing hedonism, athleticism, and grace. Whilst skateboarding is deracinated by default today[2] its primary driver, at inception, was not counter-establishment rebellion but a White society pursuing new innovations in leisure & sport.

It wasn’t until 1972 that urethane wheels were invented and rapidly replaced the clay and steel ones. Bump absorbing urethane wheels of varying hardness were the quantum leap boarding needed to become widely enjoyable and accessible. The commercial skateparks began to reappear from the mid-’70s onwards and combined with improving board shapes and trucks, ’70s skateboarding is recognizable as an evolutionary predecessor to skateboarding today. It was then that skateboarding began to explode in popularity, and ramp and vert skating fully established itself, culminating into a big break into the mainstream in 1995, when ESPN aired the first “X” games, and skateboarding began to be commercialized as an “eXtreme” sport. The mass adoption of skateboarding brought it into the punk rock scene, and punk rockers who boarded formed bands to make music to accompany skating and skate videos. Thrasher magazine defined the genre of “Skate Rock” with cassette tapes of Californian punk rock bands in the early 80s, which helped establish an ideological core to skate culture.

The establishment of a punk-rock, aggressive ideological core to skateboarding was perhaps inevitable as skateboarding by nature is an individual and individualistic pursuit that can be extremely physically punishing. It can also be wielded as a counter-establishment demonstration of rebellion (through boarding illegally on public spaces), and taken together this necessitates a musical expression of how gnarly boarding can be. The much safer pastime of surfing perhaps culturally peaked (or found its definition) with “Surfin’ USA” reaching number one in 1963, but the release and wild popularity of “Skate and Destroy” by The Faction in 1983 highlights surfing’s fading relevance to White culture and racial interests, and skateboarding’s inherent potency and power as an expression of individual will. It’s also worth noting that the punk rock revolution was a White youth movement of de-shackling from a perceived failed past, and aggressive punk rock was and is produced by all ideological factions by and for a White target audience.

Whites, increasingly disenfranchised and denounced for advocating for themselves in explicitly racial terms, have gravitated to skating as a subcultural expression and ersatz community. The invention of the popsicle deck — symmetrical, double kicktailed and therefore able to be skated in both directions without revolving the board — allowed street skating to surge in popularity in the late ’90s as all the aforementioned cultural ingredients in skateboarding’s history came to a head, and skateboarding became a youth-marketed, mainstream mode of expression for rebellious white teenagers. For Whites, boarding is a physical liberation from the psychological rigors of modern deracination, and for Blacks, Mexicans, and  other Diversity Mystery Meat as a way of “passing” in a White space by adopting a shared sport. Non-whites in contemporary skateboarding can simultaneously identify with a White sport and also with skate culture which is an outsider, politically apathetic, counter-mainstream culture that stands in defiance of the establishment “man” and his perceived system of “white oppression.”

Thus the multiracialization of skateboarding as a product of the intentional demographic eclipse of Whites in the West is inherently contradictory, all the way up into contemporary skateboarding, as any skateboarding that is not normatively White is a trans-racial sporting appropriation. Skateboarding that is not ethnically contiguous with its White origins — even a skateboarding that is sufficiently globalized to include whites but render them ‘persons’ in an Extreme Sports marketing machine — is simply fucking around on a board (or, more respectfully, pure athleticism) rather than the continuation of a sporting culture. Skateboarders (of all races) need to become aware of the ethnic origins and normalcy of boarding as a White pursuit in order to retain an authentic claim on the Skater identity.

For Non-Whites, rejecting the racial origins of Skateboarding means taking it purely as a material activity not representative of anything other than itself. For White boarders, it means becoming conscious of their sport as an expression of their ethnic heritage and, unavoidably, of themselves as targeted for being representative of implicit Whiteness.[3]

[1] By which I mean White Nationalism consistent with the viewpoints of the North American New Right as a metapolitical movement, and all other counter-Semitic, pro-White ephemera representative of healthy racial consciousness and self-esteem now broadly assimilated into the “Alternative Right.”

[3] That is to say, of representing something Whites normally gravitate to and excel in, not to the exclusion of other races, but through natural dominance of innate gifts, time investment, circumstance, and the “White Privilege” of inheriting a society built by their forebears.