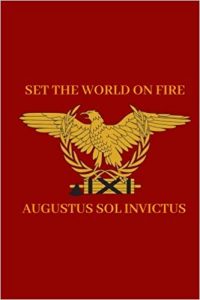 They say that you can only judge a piece of art by its internal consistency and integrity. The surreal work of Salvador Dalí and the raw unreality of Picasso are abysmal by any standard which judges art according to its ability to encapsulate the actual appearance of the real world. Their status as masters was not earned by conforming to the expectations and standards of the public – British author Martin Amis has claimed that no artist worth anything cares about good taste [2]. Rather, their status was earned by practicing their craft in accordance with their own set of principles, diligently and consistently. Their morality is their own, and if they are skillful, they allow themselves to be bound by their own rules. Through their artwork, we can see what the world might be like in other dimensions and realities. If we judge their work by the laws of our own world, we fail as the audience.

There is no rational way to understand a person like Augustus Invictus or his meatgrinder of a political autobiography, Set the World on Fire, other than as a living piece of artwork. By the standards of common contemporary morals, his history and campaign are appalling in some ways, from his LSD trips and poetic language to his unsqueamishness in proximity to White Nationalists, holocaust revisionists, and other deplorable, hateful people. But beneath the alien religion – he’s a Thelemite – and sexual promiscuity is an absoluteness in sincerity and seriousness in following the principles he holds, unmatched by even the most “moral” of contemporary, harmless, “good guys.” One gets the distinct impression that, had he been a Christian instead of a Thelemite, he may very well have been a monk, living out a celibate life in the desert somewhere.

Set the World on Fire takes its true form once this personality is understood. It is not the story of an eccentric Floridian lawyer and his failed campaign for political office; it is the story of a collision between absolute seriousness and the Kafkaesque world of American politics.

The story begins, interestingly enough, with the betrayal of Invictus’ religious Order, a realm ostensibly outside the boundaries of political corruption. After briefly explaining the historical origins of Enochian magic which helped shape the foundation of Aleister Crowley’s Thelemite religion, Invictus describes his own journey with magic (or “magick”), which took him out of law and into the wilderness. When his religious practice gave him visions of war to come, however, his Order, the Ordo Templi Orientis, not only expelled him but reported him to the FBI. Apparently, another Thelemite libertarian named James Wasserman became convinced that Augustus Invictus was a threat to the Order and that his controversial beliefs might damage the reputation of the faith in the eyes of the public, or even put it in the state’s crosshairs.

At first, this seems paranoid, and maybe even hypocritical. If Wasserman’s fears were valid, one wonders why he would have joined a religion started by as benign and uncontroversial a character as Aleister Crowley. But in a way, perhaps Wasserman’s concerns were reasonable: in a world where everyone has eyes on each other, and everyone has a say about everything, sincerity is dangerous. No matter how obscure or small a community may be, some reporter or bored citizen can investigate and write about you, drawing malicious attention from the outside world. Sincerity means acting in accordance with your beliefs, and if your beliefs don’t align with those of the majority, then your sincerity appears as immorality – even evil – to the democratic mass.

This same story repeats itself in Invictus’ involvement with the Libertarian Party. Adrian Wyllie takes James Wasserman’s place as the fearful diluter of the organizational spirit, overturning the revolutionary spirit of Rothbard, Nozick, Rand, and Mises (taking the place of Crowley) and trying to make it friendlier to a generalized public. Wyllie tells Augustus that his pronouncements were “terrifying” and that they “sent chills up [his] spine.” And why shouldn’t they be terrifying? Like Dalí and Picasso, Invictus’ sincerity is not just unfriendly to the general public, but is likely to appear as outright insanity. Corruption is how you survive in a large, multicultural democracy, which is true in the world of religion but most especially in that of politics.

On its face, this is not a new story. Everyone seems to intuit the corrupting influence the process has on those who enter the poisoned world of politics – those who were not already poisonous themselves when they entered it, that is. We cheer when we think we find someone who is uncorruptible – like Bernie Sanders – and then we sigh and carry on when our hopes are dashed, either due to their failure or when we realize that their purity didn’t survive the collision. Every time, the candidate bends in the wind to preserve his career, or else breaks under its power. Better luck next time; perhaps someone else will manage what no one else could. Maybe God-Emperor Trump will be “the one” . . .

What is new in Invictus is the proposed solution: Burn down the weeds so a new crop can grow.

This rather simple solution is of course not entirely innovative, least of all on American soil. Jefferson’s famous, if somewhat hyperbolic, quote about needing a revolution every few decades to keep things running belies a seriousness in the American intent to always hold our government to account, and even recycling it on occasion. No patriot doesn’t know by heart that “the tree of liberty must be refreshed from time to time with the blood of patriots and tyrants.” Needless to say, the weeds do not approve of such measures. “The Swamp,” as it has come to be known, has other ideas; such revolutionary measures are harmful and unnecessary – “a threat to our democracy,” as so many media drones have mouthed.

Invictus is the latest in a long line of unsuccessful modern American revolutionaries, including Barry Goldwater and Ron Paul, but Set the World on Fire makes use of the failure of his campaign to illustrate the nature of the weeds in action – of the Swamp as an organism. Ron Paul’s emphasis on the Federal Reserve, interventionist foreign policies, and so on missed the real mark, which is the mechanism that has built itself into our civic and economic system and set itself against any possibility of revolutionary renewal, of the kind that the Founding Fathers believed to be critical for the preservation of our Republic (because it isn’t “our democracy”). Otherwise, the aggregation rent-seekers and other parasites in power will reach critical mass, and the creeping incursions on liberty might become outright dystopian.

In order for a republic to function, it must be run by real people, people who are genuine, and such people inevitably fall short of being universally appealing due to the inconsistent standards to which politicians are held in a multicultural democracy. An inconsistent standard of perfection rewards only liars, and the truth-tellers become a threat to them. Genuine people, even those who are moral, have edges. Thus, in a large and multicultural democracy, a real person can be attacked simply because he is being exposed to all groups. Most will inevitably take issue with their aesthetic or political opinions, because only a two-faced liar could be seen as virtuous by a multitude of disparate groups with differing standards of what constitutes the good. The result is an undermining of integrity itself which is fast being enshrined in American politics.

Augustus Invictus is a genuine person, with a great number of sharp edges. You would be hard-pressed to find someone who would not be offended by something he has said or done at some point. But the story of his collision with the Florida Libertarian Party, with the Antifa, with his own religious Order, and with the political system at large is a story that involved other genuine people of more conventional moral inclinations. Set the World on Fire tells this story with unprecedented self-disclosure, often at Invictus’ personal expense. This self-disclosure seems to be what was lacking in previous stories of would-be revolutionaries, and it is the key to this one’s relevance. If the weeds’ power over you lies in their ability to reveal your “true self” to the whole world, and only some small segment of the world will approve of any authentic self, then no authenticity is possible, in politics or elsewhere. Self-disclosure breaks the spell of their power, but it comes at a high cost.

This is the system Invictus describes in his story. It may prove useful to other would-be aspirants to office, or weekend warriors against “the Swamp,” though it is unlikely that the public at large will recognize that we are presently at war until the war ceases to be a cold one, and such lessons become less useful. Whether or not America will have the strength to disentangle itself from the weeds is uncertain; there are reasons for both optimism and pessimism. But if Set the World on Fire is any harbinger of things to come, we can at least expect that the story will be an interesting one.