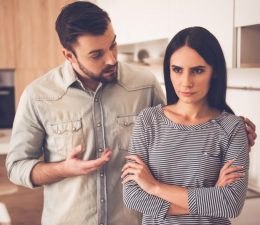 We all know what the problem is, but the recurring question we keep asking ourselves is, how do we fix it? This article is not a comprehensive, step-by-step master plan on how to establish the ethnostate. Rather, it’s a conversation-starter on what we can do to be more effective as a movement. This was inspired by – and is written as a response to – Jared Taylor’s video exploring the liberal mindset, “Do They Really Hate Us? [2]”, which he concluded by correctly stating that we need to become more effective.

My proposed solution? Acknowledging human nature as it exists, not as we would like it to exist, and internalizing this knowledge into our mindset. By adjusting our persuasive approach accordingly, we will be able to arrive at the most effective means of overcoming the obstacles we are facing: the mass indoctrination of our people based upon a utopian view of human nature that cannot be easily dispelled due to people’s emotional investment in it, and their life decisions that were built upon these false narratives. Truly understanding human nature at a deeper level – such as the fact that we are led by emotions as opposed to rationality, that we are both selfish and group-oriented in nature, and that there are numerous cognitive biases impacting our perception of reality – will allow us to develop the means required to solve the problems we’re facing. As Jared Taylor said in his video, it matters that we get it right. We can’t fix a problem we don’t understand. We must improve our understanding of and ability to act upon human nature; in other words, our emotional intelligence.

Emotional intelligence is what set Donald Trump apart from his challengers, both Republican and Democrat, during his presidential run. He won not because he had the best arguments, but because his understanding of human nature and his ability to act on it far surpassed that of any of the others. Emotional intelligence can and will work for us, as it worked for Donald Trump, if we decide to embrace it.

One of the most important lessons to be learned about human nature is that the things you discover don’t merely affect others; they also affect you to the same degree. When we talk about white advocacy, the implication is that we’re doing something to help other whites, but in reality our efforts are directed at advancing our desired worldview and/or goals pertaining to whites, be it freedom of association (voluntary separation), the ethnostate, or an anarcho-capitalist free society by and for whites. These goals represent conclusions each of us arrived at after deliberating on our understanding of reality. Objectively speaking, this is not white advocacy; rather, it is self-advocacy.

Advocating for or empowering whites means providing them with the information they need to make informed decisions rather than trying to force our conclusions onto them. I’m not saying this to assign blame, as we’re all equally guilty of this (it’s human nature, after all); rather, it’s to reinforce the point that we can only fix the problem if we have an accurate understanding of it, and that includes acknowledging that we’re also part of the problem. In order to break through the barrier of prejudice when interacting with other whites, we need to make them our focus, and not our vision of the future.

What whites need to know and understand is what it means to be white. How is being white different from being a member of any other ethnic group? What are the advantages and disadvantages of being white when dealing with members of other groups? This is what they need to know in order to make informed decisions. Sure, we address a few of these points somewhere along the way as part of our current approach, but only to make the case for our desired outcome. We will reach many more hearts and minds if our approach is based upon genuine empathy for our fellow whites.

Furthermore, people naturally dismiss ideas outside their frame of reference (i.e., what they consider normal). This tendency has major implications when it comes to persuasion. We need to work within our audience’s frame of reference as much as possible. Whatever capacity they have to move beyond their current mindset should be exploited towards helping them to acknowledge the reality of white identity and race realism. But in order for people to think about race, they first need to become aware of it. By focusing our approach on our conclusions (such as the JQ, or opposition to race-mixing), we step outside of our audience’s current frame of reference, and the real message – raising awareness in order to expand their viewpoint – gets lost. You can’t teach someone calculus before they’ve mastered the basics of addition and subtraction, and the same principle applies here. Let’s all take a vow to stop trying to teach calculus to first-graders.

You might be thinking that we’re already making gains as a movement and that it’s possible that we’re already on the right track, and thus that what I’m proposing isn’t really necessary. I think that’s a dangerous frame of mind to be in. The reason race realism is gaining some traction at the moment – albeit arguably limited to the political Right – isn’t because we’ve somehow become more effective. Rather, it’s that some of the more reasonable people on the Right have seen and heard things that they simply cannot explain away with their current belief system and are seeking answers for themselves, which they discover when they find us. However, the same cannot be said for all white conservatives, and especially not for those whites on the Left who are brainwashed to the extent that they’re able to rationalize any and every event reality throws their way that doesn’t correspond to their beliefs. I sometimes wonder what the final thoughts were of those liberals whose lives were sacrificed upon the altar of diversity. Did they spend their final moments rationalizing their victimization, or were they finally able to acknowledge the truth that race matters? We’ll never know.

My point here is that the current approach relies on things getting progressively worse, hoping that more people wake up to the truth before it’s too late. This is not a winning strategy, especially considering the human mind’s ability to distort reality in order to protect one’s feelings and preconceived notions. Victims of sexual abuse don’t become predators themselves because they enjoyed their abuse and want others to share it. Rather, to protect themselves from the trauma of what they experienced, they normalize and reenact it in order to maintain a consistent worldview. This is just how the liberal mind operates. To say we’re doing okay as we are is to wager Western civilization on the ability of Leftists to think and act rationally, when the truth about human nature already confirms that this is nearly impossible. How is that approach working out for the Boers in South Africa?

To effect real change, we need to be able to reach out to both liberals and conservatives alike, and to do that, we need to bring our A-game. We need to improve both ourselves and our approach by increasing our emotional intelligence and making spreading knowledge of the reality of white identity and race realism our one and only priority, until we’ve attained the ability to exercise influence at the political level. Once we’ve established political clout, we can and will discuss alternatives as a collective, weighing the pros and cons of different courses of action – but now is not the time for that. By refining our approach, we will attract more supporters, drawn from those individuals currently sitting on the sidelines, unable to contribute due to the negative connotations associated with some of our conclusions (the ethnostate, freedom of association, the JQ, views on race-mixing, etc.).

However, if all we’re doing as a group is raising awareness about what it means to be white – a right that is granted to every other ethnic group – it makes the case for public support of our beliefs that much more compelling. We need the movement to go mainstream. We need powerful and influential allies in both the cultural and political realms. This approach lays the groundwork for doing exactly that.

As Jared Taylor said, we need to get it right; we need to become effective, and to do so, we need to understand how the human mind works in order to change things for the better. Time isn’t on our side, but there are still things we can do to bring about meaningful change, and the first step is to reevaluate our current approach and embrace the concept of emotional intelligence.