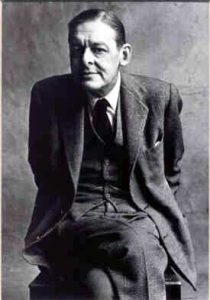 Thomas Stearns Eliot was one of the 20th century’s most influential poets, as well as an essayist, literary critic, playwright, and publisher. He won the Nobel Prize for literature in 1948. Born in St. Louis, Missouri, from old New England stock, Eliot emigrated to England in 1914 and was naturalized as a British subject in 1927.

Eliot, like Ezra Pound, W. B. Yeats, Knut Hamsun, Wyndham Lewis, and many other great writers of the 20th century, was a man of the Right, although he never crossed “the line” into overt fascism. To learn more about his life, work, and metapolitical significance for the New Right, I recommend the following works published on this site:

, which is not actually complete, but the best one-volume selection; Selected Prose of T.S. Eliot [11], which is a good selection of his literary criticism, and

Christianity and Culture [12], his principal work on religion and culture.