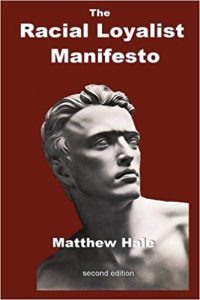 Greg Johnson’s White Nationalist Manifesto [3] (2018) is a big hit. It remains in the top ranks of the Political Philosophy category at Amazon. According to the publisher, it is selling “like gangbusters.” After reading this book, I decided to take a look at Matt Hale’s work with a similar name, The Racial Loyalist Manifesto, to see how the two books compare. Matt Hale is the successor to Ben Klassen, the founder of the pro-white religion often called the Creativity Movement. Today, he is in prison.

In looking over Matt Hale’s career – that is to say, looking over his career as described by terribly hostile sources – I am quite certain that the two of us might have crossed paths at some point. Hale is from East Peoria, a nice town built upon the rich soil of northern Illinois. Nonetheless, I’d never heard of Hale until the after the national news reported that a federal judge’s mother and husband had been murdered. In the wake of the horrible slayings, the media went on a frenzy, blaming Hale’s followers for the killings, given that the judge in question had presided over a legal case against Hale’s organization, the World Church of the Creator, and Hale himself was then on trial for having allegedly solicited an undercover FBI agent to kill the judge (he was subsequently sentenced to forty years in prison for this). By that time, I was redpilled and suspected that Hale and his disciples were not really involved. When an immigrant [4] turned out to be the culprit, and later that same year, blacks (ironically) burned down parts of Toledo, Ohio [5] to protest a neo-Nazi-led protest march against black crime, I decided that those like Matt Hale had a point, and that I needed to do something for my race. But going on some sort of hopeless, violent revolutionary crusade was out of the question for me. (I wasn’t to discover Counter-Currents until many years later.)

Although it is highly likely he was railroaded based on the testimony of an FBI informant and agent provocateur, nevertheless, Hale’s pro-white activism is more of an example of what not to do. He became active in the late 1980s, at a time when Americans who had been alive during the Second World War, but who were too young to have served in it, were at the height of their social power. This generation, often called the “Silent Generation,” fully believed the story of the war as described in pro-Jewish metapolitical narratives like the 1988 War and Remembrance and the 1978 Holocaust. As a result, the northern Illinois establishment moved against Hale as though he were Satan himself. When Hale burned an Israeli flag, he was arrested for violating open-flame laws; when he distributed fliers, he was fined for littering. Hale was simply too young and naïve to resist the establishment.

His activism at this time can be compared to a reckless frontal attack upon the strongest points of his enemy’s defenses. White Nationalism is a small movement, and that movement is the designated devil figure for American society’s official religion. In this religion, Americans are all J-Left Negro-worshippers. The Jews who died during the Second World War are this religion’s crucified Christ.[1] [6] Auschwitz is its Calvary Hill. In this view, protections under the First Amendment don’t apply to pro-white protests, unless one has a considerable amount of time and money to get one’s case through the courts.

Additionally, Hale did several imprudent things in his youth, such as attacking a mall cop. As Massad Ayoob has written [7] concerning the self-defense laws [8], how one gets into the “The System” of criminal justice matters. Once in “The System” as an offender, one is stuck there. When the State of Illinois denied his license to practice law, it had a case – Hale had actual arrests that they could point to as a rationale. Again with the frontal attack – why didn’t Hale get a law license in Wisconsin or Iowa first? Thus, when one of Hale’s followers went on a shooting spree, it was only a matter of time before he himself would be imprisoned.

Greg Johnson’s White Nationalist Manifesto (2018) is the best work explaining White Nationalism that I’ve read. It is much like David Duke’s Jewish Supremacism (2007), or non-White Nationalist Peter Brimelow’s book about immigration that touches on pro-white themes: Alien Nation (1995). These three books are similar in that they explain complex problems and high concepts in simple terms that can be understood by many. By contrast, Kevin MacDonald’s trilogy was written on a much higher level – high enough that I suspect more people have claimed to have readhis Culture of Critique (1998) than have actually read it.

The Racial Loyalist Manifesto reads like a religious text. When I started it, I was reminded of the Bible’s Book of Psalms or the Sermon on the Mount. Hale has a different message from the Bible, but the cadence and rhythm of this book feels like that of a sermon. This is not necessarily a bad thing. Matt Hale is first a reverend. And there are a number of things which Hale writes in it that are also mentioned in The White Nationalist Manifesto and other writings that have appeared at Counter-Currents.

We will serve no economy. Rather the economy will serve ourselves.[3] [10]

White Nationalism simply means the right of all white peoples to sovereign homelands.[6] [13]

Conservatism is thus a needless distraction at best, a sepulcher at worst. Our values must serve our race, not our race our values. Neither “left” nor “right” but White is the issue.[7] [14]

Second, to escape from the charge of identity politics, conservatives insist that their goal is not to conserve a particular people—Americans, Germans, etc.—but rather to promote a list of abstract values. These values, moreover, are supposedly universally valid, which means that they should appeal equally to people of other races and nations. This leads to the absurd conclusion that if Americans were completely replaced by Mexicans, this would be a triumph of conservatism as long as the new bronze nation professed belief in “el Sueño Americano.” (That’s “the American Dream” to you gringos.)[8] [15]

Some of What is Different

There are also some considerable differences between Hale and Johnson’s ideas. Hale endorses something of a White Imperium – a unified political body under a unified ideology. Hale writes:

. . . [N]o nation of the White Race can be allowed to come before the survival of the White Race as a whole. No branch of a tree (the nation) can be more important than the tree (the race) itself. True national (ethnic) pride is good but never with the result of harm to the greater White Race itself. We Racial Loyalists thus reject the term ‘nationalism’ in favor of Racial Loyalty and it is long overdue that all those who are actually Racial Loyalists do the same. ‘Nationalism’ only confuses the true issue: whether our race will live or die.[9] [16]

Johnson’s ethnostate takes into account the very real differences between white ethnic groups. His idea is something like small nations grouped together in mutual defense organizations. To get a clear view of his ideas, or about similar ones from others, one can read articles here at Counter-Currents about independence movements in Scotland [17], England [18], and Catalonia [19], and there is an in-depth discussion on the matter here [20].

The White Nationalist Manifesto is a much easier read than The Racial Loyalist Manifesto. Greg Johnson’s ideas are designed to take people from where they are now toward understanding and supporting the idea of a white ethnostate and White Nationalism. Matt Hale’s manifesto is more for after the revolution. It is so dense that, theoretically, a preacher in the distant future could take some verses out of one chapter and speak on them for an hour.

So what to do about Matt Hale, who has been unjustly imprisoned for more than a decade, and will likely be kept there for many more years? It doesn’t seem that there is much that can be done in the short term. President Trump could commute his sentence after his second term starts, given that FBI Informants are often dishonest people seeking to railroad someone; after all, the FBI has been attempting to do the same to him.

But it is unlikely that freeing Matt Hale will be taken up as a cause in the short term. The risks would be quite steep, and in any event, White Nationalists don’t yet have the clout to get him a pardon or an early release. The best way to free Matt Hale is to continue doing what we are doing: being good citizens and working to change society through metapolitics.

[1] [21] At least according to one denomination of this religion. Other denominations have Martin Luther King, Jr. as their Christ.