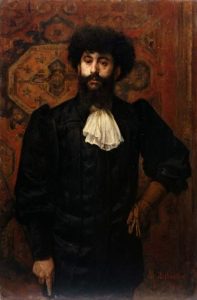 Joséphin Péladan, as painted by Marcellin Desboutin in 1891

France gave the world the French Revolution in 1789. It was an epochal event, albeit a symptom of a line of cultural decadence that gave birth to both liberalism and Communism, and which remains a pall over the entire West and wherever the West reaches. It is ironic that those who were condemned as “collaborators” in France during and after the Second World War were for years prior to the war the most vociferous in their lamentations regarding the decadence of the French Republic. None lamented more the rapidity with which France had fallen to the Germans; it was regarded as a national dishonor and the result of France’s moral, spiritual, and cultural rot.

Among those who had brought ruin to France, Freemasonry had a prominent role.[1] [2] Rationalism, secularism, scientism, and materialism were used as methods of subversion by occult forces in a struggle between Counter-Tradition and the few remaining vestiges of the Traditional.[2] [3]

In France during the decades leading up to another epochal catastrophe, the First World War, this occult war between Tradition and Counter-Tradition intensified. Since Counter-Tradition makes use of Counterfeit-Tradition, it is often difficult to discern what role sundry secret societies and individuals play in this conflict. For example, what side is Nicholas Roerich on, and what side the apparently “sinister” Aleister Crowley?[3] [4] The answer is not as obvious as one might suppose. At the time, there was an occult revival; a product of a civilization in crisis, and the existential angst of those who could not endure the tedium of scientism, secularism, rationalism, and atheism, which since the time of the French Revolution had been heralded as new religions. In the liberal ideal of the “happiness of the greatest number,” few are happy with the tedium of equality and democracy. While in Britain, William Butler Yeats, Crowley, and sundry other eccentric and intellectual figures were responding to the age of Darwin, industrialism, and science through the Hermetic Order of the Golden Dawn, a remarkable individual emerged from the occult revival in France: Joséphin Péladan.

Péladan was the head of the Ordre Kabbalistique Rose-Croix (Kabbalistic Order of the Rosicrucian), succeeding his brother Adrien. While the original Rosicrucians, who had appeared mysteriously in Europe during the early seventeenth century and issued anonymous manifestos, seem to have been among the precursors of the Masonry and Illuminism that fermented the French Revolution against the Church and the Monarch, Péladan, on the contrary, was a Catholic traditionalist who repudiated the ideals of the French Revolution and the “Liberty, Equality, Fraternity” of the Grand Orient of Masonry, stating in 1883, “I believe in the Ideal, Tradition and Hierarchy.”[4] [5]

Interestingly, when a schism occurred within the Order, one of the reasons was that among what was regarded as Péladan’s eccentric behavior was his having issued a public condemnation against a female member of the Rothschild banking dynasty. Among the leaders of the schism were the morphine-addicted Marquis Stanislas de Guaita, an individual who was to display decidedly Satanic convictions,[5] [6] and the conspiratorial figure Papus, who brought Martinist Freemasonry to Russia with decidedly subversive results, culminating in Bolshevism. Under their control, the Ordre Kabbalistique worked the degrees of this Martinist Masonry, which had a linage reaching back to the infamous Illuminati via the Kabbalist, Martinez de Pasqually.

At the time of the schism, Péladan and de Guaita had been involved in “magical warfare” against another sinister character, the apostate priest, the Abbé Boullan, who was the head of a depraved Satanic cult (this description is without sensationalism). However, de Guaita was himself interested in the Left-Hand Path magic of Boullan.

Leaving the Ordre Kabbalistique, Péladan founded the Ordre de la Rose-Croix catholique et esthétique du Temple et du Graal (Order of the Temple and the Graal and of the Catholic Order of the Rose-Croix), the title explicitly explaining the character of this Order.

On March 24, 1893, the Supreme Council of the Ordre Kabbalistique issued a public statement signed by Stanislas de Guaita and Papus, condemning Péladan as a “usurper, schismatic, and apostate,” and denouncing his Ordre de la Rose-Croix catholique. The battle lines between Tradition and Counter-Tradition had been drawn publicly.

Péladan saw the purpose of his Rosicrucian Order as being to encourage the resurgence of the arts that were in decay. A novelist himself, he was a central figure in the Symbolist art movement, and many artists, musicians, and poets of note were initiated into his Order. Péladan considered the artist to be the embodiment of king, priest, and magus; the nexus with the divine. He explained:

Art is man’s effort to realize the Ideal, to form and represent the supreme idea, the Idea par excellence, the abstract idea, and great artists are religious, because to materialize the idea of God, the idea of an angel, the idea of the Virgin Mother, requires an incomparable psychic effort and procedure. Making the invisible visible: that is the true purpose of art and its only reason for existence.[6] [7]

Péladan saw art as the religion that persists above all atheistic efforts to repress the spirit. He called for spiritual battle against the profane:

Artist, you are a priest: Art is the great mystery and, if your effort results in a masterpiece, a ray of divinity will descend as on an altar. Artist, you are a king: Art is the true empire, if your hand draws a perfect line, the cherubim themselves will descend to revel in their reflection . . . They may one day close the Church, but [what about] the Museum? If Notre-Dame is profaned, the Louvre will officiate . . . Humanity, oh citizens, will always go to mass, when the priest will be Bach, Beethoven, Palestrina: one cannot make the sublime organ into an atheist! Brothers in all the arts, I am sounding a battle cry: let us form a holy militia for the salvation of idealism . . . we will build the Temple of Beauty . . . for the artist is a priest, a king, a mage, for art is a mystery, the only true empire, the great miracle.[7] [8]

The Salon de la Rose et Croix was established in 1892 to exhibit Symbolist art to the public. Art was magic, not rituals and incantations. It was intended as the harbinger of a spiritual revolution that would overthrow the materialistic and the decadent, and as the antithesis to the art of the other salons. The first exhibition drew fifty thousand visitors. Clearly, the French yearned for something transcending the crassness of Grand Orient liberalism and secularism, which had rotted France for a century; the “disenchantment of the world,” as he called it. Richard Wagner’s music had a special place, Péladan regarding Wagner as “a therapeutic detoxifier of France’s materialism.” Erik Satie was the Order’s official composer, and Debussy was a close colleague. Péladan defined what was required in his appeal for exhibitors: “The order favors the Catholic Ideal and mysticism. After that, Legends, Myths, Allegory, Dreams, the paraphrasing of great poets, and finally, all lyricism.”

Péladan’s fight for the recovery of Tradition from the corruption of those Black Adepts (to use Crowley’s term) who had engineered the French Revolution – which in a proto-Bolshevik reign of terror destroyed churches, killed priests, and performed a virtual Black Mass on the altar of Notre Dame – was echoed by another famous French occultist, Éliphas Levi, also a Catholic and who was perhaps an initiate into the Rose Cross’ eighteenth degree,[8] [9] where one at last learns the true subversive character of Masonry:

Masonry has not merely been profaned but has served as the veil and pretext of anarchic conspiracies . . . The anarchists have resumed the rule, square and mallet, writing upon them the words Liberty, Equality, Fraternity – Liberty, that is to say, for all the lusts, Equality in degradation and Fraternity in the work of destruction. Such are the men whom the Church has condemned justly and will condemn forever.[9] [10]

August Strindberg, the Swedish novelist, playwright, poet, and painter who turned to the occult during an existential crisis, later returned to Catholicism as a Traditional anchor in a decaying world. Upon visiting Paris, he also noted the decadence there in an autobiographical account in which he indicated his intention of returning to the Church. On reading Péladan, he remarked:

On May 1st I read for the first time in my life Sar Péladan’s Comment on devient un Mage.

Sar Péladan, hitherto unknown to me, overcomes me like a storm, a revelation of the higher man, Nietzsche’s Superman, and with him Catholicism makes its solemn and victorious entry into my life.

Has “He who should come” come already in the person of Sar Péladan? The Poet-Thinker-Prophet – is it he, or do we wait for another?[10] [11]

Péladan’s salon exhibitions were an enormous success. However, by the sixth and final exhibition in 1896, he had become worn out with the very public so-called “War of the Two Roses” between his “Catholic Rose-Cross,” as he called it,[11] [12] and the Martinist-Masonry of the Ordre Kabbalistique. For someone such as Péladan, such psychic conflicts, whatever we may think of their mundane reality, and likely augmented by Papus’ Masonic friends and Rothschild influences in the press, would have taken a heavy toll.

[8] [21] This is indicated in a footnote to his History of Magic, where Levi states, “Having attained by our efforts to a grade of knowledge which imposes silence, we regard ourselves as pledged by our convictions even more than by an oath. . . . and we shall in no wise fail to deserve the princely crown of the Rosy Cross . . .” (London: Rider, 1982, p. 286).