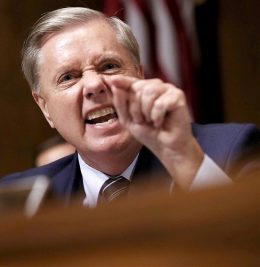 I’ve always thought of Lindsey Graham as a milquetoast and a useless RINO. But – surprise, surprise – last Thursday he emerged as the man of the hour, with his impassioned defense of Supreme Court nominee Brett Kavanaugh. Graham’s unscripted remarks (totaling less than five minutes) are fascinating in part because they give us a window into the mind of a conventional establishment conservative – one who seems to be reaching a point where he can no longer stomach life in the swamp.

Of course, Kavanaugh’s own remarks (lasting about forty-five minutes) have gotten the most press. Recognizing that he might very well not be confirmed (depending on which way the hot air blows), Kavanaugh decided to go out with his dignity intact. And so this mild-mannered man fought – bravely, and with great passion and eloquence. He called the Democrats’ performance “embarrassing” and the confirmation process “a national disgrace.” He called the liberals out on their inflammatory rhetoric (which included branding Kavanaugh “evil”) and blamed it for, among other things, the death threats he and his family have received in recent days. It was an inspiring display of righteousness and manly courage.

When Kavanaugh spoke about how his ten-year-old daughter had prayed for his accuser, Dr. Christine Blasey Ford, his voice broke. It was a dramatic and completely natural moment, and reportedly many a viewer shed tears of sympathy. Word on the street is that President Trump was glued to the proceedings, and delighted that Kavanaugh had gone on the offense. But of course, this is what Trump himself would have done, and has done many times.

The words of Senator Graham have received less comment, but to my mind they are actually more interesting. (You can see the video above.) Earlier in the day he had introduced himself, remarkably, as a “single white male from South Carolina” who was not willing to “shut up.” This was a reference to the September 19 remarks of Rep. Mazie Hirono, a Real Grade-A Dingbat, who told men that they should just “shut up” about Ford’s accusations. Graham called some of the wilder accusations against Kavanaugh (e.g., that he was the mastermind behind multiple gang-rape parties!) “garbage,” and said that we’re in “the Twilight Zone.”

He went on to defend the rule of law and the presumption of innocence. Remarkably, in recent days, Democrats – especially Democratic women – have challenged the presumption of innocence and declared that female accusers have “a right to be believed” – automatically, it would seem, with no questions asked. I don’t know which is worse: that Leftists might actually believe this garbage, or that they are just so cynical and reckless they will say anything to win, even if it means undermining our most basic principles of justice.

Graham’s opening remarks were impressive, but he became genuinely incandescent later in the day, when it was his turn to question Kavanaugh. At times he groped for words, sometimes choosing the wrong ones. His remarks meandered, as if he is was experiencing so much intense anger and righteous indignation that he was having difficulty composing himself and controlling his thoughts. And, just as with Kavanaugh, the emotions were real and they were raw. One admires Graham’s remarks not for their eloquence, but for their tongue-tied, honest passion. I didn’t think old Lindsey had it in him.

The emotion that came across most clearly is outrage. Literally shouting, Graham addressed his liberal colleagues as follows:

If you wanted an FBI investigation, you could have come to us! What you want to do is destroy this guy’s life, hold this seat open, and hope you win in 2020! You’ve said that, not me! [To Kavanaugh:] You’ve got nothing to apologize for. Boy, you all want power! God, I hope you never get it. I hope the American people can see through this sham. That you knew about it and you held it. You had no intention of protecting Dr. Ford. None.

However, what stands out above all else in Graham’s remarks are the parts where he said that he feels betrayed by the Democrats. To Kavanaugh, he said:

When you see Sotomayor and Kagan, tell them that Lindsey said hello because I voted for them. I would never do to them what you’ve done to this guy. This is the most unethical sham since I’ve been in politics.

In other words, when Sotomayor and Kagan came up for confirmation, Graham did the right thing: He made an objective assessment of their merits, and based his vote on that. (I do not agree with his conclusions or his vote – but basing them on an assessment of merit is clearly correct.) And now he is shocked, just shocked that Democrats haven’t played by the same gentlemanly rulebook and done likewise with Kavanaugh.

Yes, folks, Graham’s shock really did seem genuine. It’s actually kind of touching – touchingly naïve, and naïvely decent. How the guy could have been such an innocent after twenty years in politics is a bit of a mystery. Clearly, he had been deluding himself about the character of his opponents. And what one sees in this little four-minute tirade is that the scales have suddenly been lifted from his eyes. He now sees these people for the scum that they are. At one point, Graham says, “God, I hate to say it because these have been my friends.” Yes, he actually thought that his Democratic opponents were his friends. (If it’s an act, it’s Oscar-worthy – watch the video and you’ll see.) Yes, it’s easy for those of us who are much, much further to the Right than Graham to feel contempt for this man – for a variety of reasons, and not just his dopey illusions about the Democrats. But let’s not lose sight of the basic fact here: This is a man who has been tricked and manipulated through his virtues, chiefly his commitment to fair play, reciprocity, and generosity.

At least he’s now awake to who he is dealing with. We’ll see how long it lasts or what good it produces, but he has been Kavanaugh’s toughest and most vocal supporter. And he realizes that it’s not just the Democrats who pose a threat here, but the weak and feckless Republicans as well. So Graham ended his remarks by saying:

To my Republican colleagues, if you vote no, you’re legitimizing the most despicable thing I have seen in my time in politics. [To the Democrats:] You want this seat? I hope you never get it. [To Kavanaugh:] I hope you’re on the Supreme Court, that’s exactly where you should be. And I hope that the American people will see through this charade. And I wish you well. And I intend to vote for you and I hope everybody who’s fair-minded will.

At this point, everyone should have risen with cheers and applause, and the Democrats should have scurried back to their ratholes, leaving behind trails of slime. But not so fast! The appropriately-named Sen. Jeff Flake got cornered in an elevator by some shrieking, hysterical female opponents of Kavanaugh. This is must-see TV [2]. Watch how the weak and feckless Flake falls silent, hanging his head as if ashamed. It reminded me of how Bernie Sanders reacted to having one of his speeches hijacked in 2016 by Black Lives Matter. It was the same thing: a kind of hangdog, po-faced submission. The result: Flake flaked out and called for a new FBI investigation into Kavanaugh – because the first six FBI investigations apparently weren’t enough. And, predictably, the weak and feckless Republicans went along with Flake’s proposal. So now a committee vote on the nomination will be delayed for a week or so while the FBI investigates an alleged assault that has no specific date, time, or location, and no witnesses. Incidentally, Flake is a lame-duck Republican who is not running for reelection because he knew he didn’t have enough support from his base.

Graham and Flake are portraits of everything that is wrong with mainstream conservatism. They continually allow Democrats to lead them around by the nose, letting them set the agenda. They consistently allow Leftists to claim the moral high ground, and are terrified to challenge their basic premises. They agonize over what the increasingly irrelevant, Left-leaning media has to say about them. They play by the rules, act like gentlemen, and make conciliatory gestures – only to be repeatedly surprised by the fact that Leftists are opportunistic scumbags with no shame and no principles. In short, they act like born losers. Someone – I forget who – pointed out that the basic attitude of the Never-Trump Republicans is that they would rather go on losing gracefully until demographics tosses their party into the dustbin of history, than support a nouveau-riche vulgarian who might outshine them by actually meaning the things that he says. No wonder they call the GOP “the stupid party.”

The lesson Graham ought to learn here, but probably won’t, is that it doesn’t pay to play fair with Leftists, and that they will undermine you at every step by using your virtues against you. Cooperating with Leftists is not even possible, because they cannot be trusted, and their values are completely at odds with ours. A recent poll [3] shows that nearly a third of Americans think that we are headed toward a second civil war. This is actually not that implausible. It is difficult to imagine how differences like ours can be settled entirely by peaceful, democratic means. At stake is the survival of our culture, and the white majority of the nation, without which the culture – including such achievements as the rule of law and the presumption of innocence – is not likely to persist.

The probability is that, in the end, we will have to consider some pretty radical measures when it comes to dealing with the Left. Their ideology is the most pernicious and destructive force ever visited upon humanity. It is inimical to life, to social order, to the continuance of distinct peoples and cultures, and to all that is healthy and decent. To paraphrase Nietzsche, it is a revolt of everything that crawls on the ground against everything that has height. We must not just defeat this ideology electorally, we must make sure that it never gains a foothold again. This will almost certainly require radical measures of the kind that were enacted in post-Communist European countries.

To wit: We will have to consider banning some of their organizations and parties. Left-wing professors will have to be dismissed from universities (as happened in post-Communist eastern Germany), and their pet programs eliminated (as has now happened with “Gender Studies” in Hungary [4]). The curricula of K through 12 schools will have to be completely revamped and, again, some instructors barred from teaching. There will also need to be some kind of regulations imposed upon the media, to stop one individual or entity from owning multiple outlets and promoting one agenda or perspective. And a new “fairness doctrine” will have to be imposed to keep journalists honest.

These are just a few examples, and they all involve tough choices. I very seriously doubt that Lindsey Graham and his ilk would make them. Yes, at least Lindsey did wake up for one brief shining moment and stared into the abyss that is the soul of the Left. But, mark my words, next week he’ll be reaching across the aisle . . .