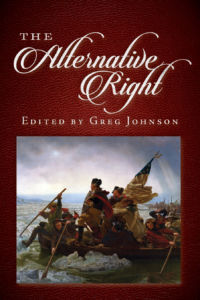 This is the second installment of the opening essay of a forthcoming anthology called The Alternative Right.

From the summer of 2015 to the fall of 2016, the Alt Right was winning debates and changing minds. Even more significantly, it was also changing the parameters of political debate. It was increasingly capable of driving the news cycle and forcing the political establishment to respond to it. It was also funny, creative, and cool. Naturally, people wanted to join the movement and embrace the brand.

But that presented some problems.

Second, the Alt Right brand was effective because of its vagueness. But the flip side of that vagueness was that nobody could control how it was used. Anyone who dissented from the Republican establishment could call himself Alt Right, and as the Trump campaign gained momentum, increasing numbers of young Trumpian populists and civic nationalists wanted to use the term. However, many of these newcomers were ideologically naïve and half-baked.

The main bone of contention was race. The core and vanguard of the Alt Right were White Nationalists. They believed that whiteness is a necessary condition for being a member of any European or European-derived society like the United States. Many newcomers rejected this idea. They were ignorant of the problems of multiracial, multicultural societies. They believed the widespread dogma that being an American is a matter of a civic creed, to which people of any race can adhere. Many of them greeted White Nationalist ideas with indifference or downright hostility.

The utility of the Alt Right brand was as a tool of reaching out to people who were closer to the political mainstream, the “normies.” The normies were now coming in droves, and some of them wanted to define the Alt Right in more comfortable civic nationalist terms. This led to a crisis in the Alt Right.

For years, people in our movement had complained about only “preaching to the choir.” But now that White Nationalists had a vast audience of people who didn’t already agree with them, they did not feel elated; they felt threatened. Many people were worried that their movement was going to be “coopted” by “entryists” and started thinking in terms of how to repulse newcomers.

I thought this was self-defeating. I urged people to see the situation as an opportunity to convert a vastly expanded audience to White Nationalism. The reason we had come so far is that we had the best arguments and propaganda. We just needed to have faith in ourselves and our message, then we needed to get back in the battle and continue winning new converts.

We also needed to be realistic about the limits of our ability to control a decentralized, grass-roots, online social movement with anything less than the best memes. It is empty to talk of entryism and purges when one is dealing with an online movement with fuzzy boundaries. We cannot prevent people from going online, nor can we throw them off the internet. Finally, we needed to develop an ethos that would allow us to collaborate productively with people closer to the center, whose links to the mainstream were channels for our ideas and influence.

Perhaps the worst loss, however, was in the ideological realm. The most important intellectual battle White Nationalists face is to destroy the taboo against white identity politics. After Hailgate, the Alt Lite  differentiated itself from White Nationalism by drawing a firm line against white identity politics and digging in behind it, strengthening the taboo among the very people who were most receptive to questioning it.

It was a disaster. But it did get high marks from Andrew Anglin, who had been at the forefront of the effort to identify the Alt Right with Nazism: “Basically, Richard Spencer did something at NPI that was needed exactly right now in the post-victory period: he separated the Alt-Right from the Alt-Cuck and the Alt-Kike. We are better off without these people.”[1] [4] We were better off only if one’s goal was to assert control over a marginal, subcultural political movement. We were significantly worse off if one’s goal was to interface with the cultural and political mainstream and move it in our direction.

Some figures on the Alt Lite have speculated that Spencer engineered Hailgate precisely to drive off civic nationalists by identifying the Alt Right with racial nationalism in its most stigmatized and toxic form. For what it is worth, I ran this theory by someone who socialized and worked closely with Spencer over the years, and he rejected it as “giving him too much credit” for Machiavellian strategizing. Instead, he chalked Hailgate up to a mix of impulsiveness, drunkenness, and unfathomable bad judgment.

Whether Hailgate was intentional or not, however, it became the pattern for what came next: a drive to centralize the Alt Right under the leadership of Richard Spencer, which led to further division and dysfunction.