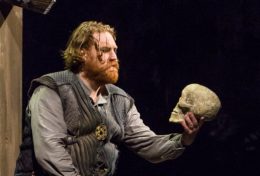 Last week was a very bad week for the globalists. First, Jair Bolsonaro won the Brazilian presidency in a landslide; then, Angela Merkel was forced to resign the chairmanship of the Christian Democratic Union after her party received another drubbing in regional elections. Then on Tuesday, the visiting Hungarian State Opera gave the American premiere of Ferenc Erkel’s opera Bánk bán (1861) at the David H. Koch Theater at Lincoln Center in New York City. Erkel (1810-1893) is one of Hungary’s best-known and most beloved composers. He is also the composer of Hungary’s official national anthem [2]. Bánk bán (The Viceroy Bánk) is regarded by Hungarians as their national opera, and is concerned with themes that will be familiar to observers of contemporary Hungary: patriotism and nationalism are the sine qua non of a nation-state; and Hungary will cease to be Hungary if foreigners are allowed to dominate and despoil the country. That this opera was performed in Hungarian-born George Soros’ city of residence and at a theater named after one of the Koch brothers added a delicious layer of Schadenfreude to the proceedings.

The opera is set in thirteenth-century Hungary. King Endre II is off at war. Back at the court, Endre’s wife Gertrude (a foreigner from Meran) is left in charge, and she packs the court with Meranians who are hostile to Hungary. Otto, the Duke of Meran and brother of Gertrude, has decided to seduce the beautiful Melinda, the virtuous wife of Bánk bán. Otto’s attempted seduction was instigated and is being egged on by Gertrude. A character named Biberach gives Otto a powder that will cause Melinda to fall unconscious and allow Otto to have his way with her. Meanwhile, Gertrude and Otto plan to take over Hungary and make it part of Meran. Hungarian rebels seek out Bánk bán and ask him to assist them in their defense of their homeland.

Then, Melinda arrives on the scene and appears to be insane, the result of her having been raped by Otto. She begs for Bánk to kill her but to spare their child. Bánk then puts Melinda and the child into the custody of Tiborc, an old, trusted retainer, and asks him to escort them to safety. Bánk goes to the castle to confront Gertrude. She pulls a dagger on Bánk, who uses it to kill Gertrude. A terrible storm is building and Tiborc is trying to get Melinda to cross the river while they still can. Melinda, however, has become so mad with grief that she grabs her child, jumps into the river, and drowns. King Endre returns to find Gertrude dead. Enraged, Endre accuses his court of treachery, but the chorus relates Gertrude’s many acts of treason. Bánk confesses to the crime but says that only the nation can judge him. Just as Endre is about to raise his sword, Tiborc enters and announces the death of Melinda and the child. Bánk then asks to be buried with wife and child and collapses. After a funeral chorus, the opera ends.

Needless to say, the opera’s production was historically accurate, and exhibited none of the horrors of modern, Regieoper productions [3]. There were no unsubtle negative references to Orbán or Trump; there were no attempts to change the “gender identities” of any of the characters. The opera was presented essentially as the composer and librettist intended, and in this day and age, that is almost a radical concept. Although the role of Bánk bán was originally written for a tenor, it is more of a Heldentenor role, and baritone Levente Molnár acquitted himself very well. His rendition of the famous aria, “Hazám, hazám, te mindenem!” (Homeland, homeland, thou art my all!) was particularly affecting. In many ways the star of the evening was soprano Zita Szemere. Her performance of the role of Melinda was nothing short of phenomenal. She is possessed of perfect intonation and has such vocal control that she can do decrescendos to imperceptibility without going off pitch. The orchestra of the Hungarian State Opera performed with a warmth of sound that one typically finds in Central European ensembles. Unfortunately, this type of sound is seldom exhibited by American orchestras, which tend to favor technical virtuosity over musicality.

The Hungarian State Opera and Ballet’s residency for the next month at Lincoln Center is part of the Orbán government’s lavish spending on the arts, which they regard as a national treasure. Of course, as a recent New York Times article [4] revealed, Leftists do not like it when a Right-wing government spends money on the arts. Of course, these same Leftists also bitterly complain when Right-wing governments do not spend money on the arts. But the real reason why the Leftists do not like Viktor Orbán spending on the arts is that it reminds everyone that Hungary has a unique and highly sophisticated culture that is worth fighting for, and is one that will disappear if the savage hordes from Africa and the Middle East are allowed into Hungary. Hazám, hazám, te mindenem!