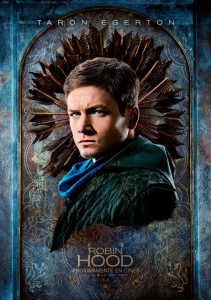 Here is another cash grab served up in time for Thanksgiving. This train wreck of a film is a turkey that cannot be pardoned. Of the countless film adaptations of the Robin Hood legend made since the early twentieth century, the latest is somewhere at the very bottom of the pile.

Director Otto Bathurst wants you to know that his adaptation is different from its predecessors: modern, cool, up-to-date. He ditches the pastoral “Merry England” aesthetic for an urban, soot-stained look that calls to mind mediocre teen dystopian films. Robin Hood’s Lincoln green garb is gone, replaced with a slick quilted jacket. He is called simply “Rob” or “The Hood.” Viewers are told at the beginning of the film to “forget history, forget what you think you know, forget what you’ve heard before.”

The Robin Hood of legend is the ultimate national hero: a man of the people and a patriot loyal to his king and country. By the sixteenth century, he had become a popular English folk hero who featured in May Day celebrations, plays, Morris dances, and other folk traditions. He became an avatar of Englishness and “Merry England” in the nineteenth century with the emergence of folk revival movements that came about in response to industrialization.

The Robin Hood myth is inherently Right-wing both because of its essential Englishness and patriotic significance and because it involves a gang of men who take justice into their own hands and restore order to a corrupt, decadent society. Robin Hood is not the proto-Communist revolutionary of Leftist fantasy: he is a patriot who respects the folk traditions of his land and wants to restore the integrity of the crown. The Buddha criticized the Brahmins of his time not because he was a revolutionary who wanted to tear down the caste system, but because he believed that they had fallen prey to materialism and avarice.[1] Robin Hood likewise targets corrupt elites not because he is a Communist, but because they are greedy and unpatriotic.

This is all absent from Bathurst’s retelling, which paints Robin Hood as the leader of a modern proletarian uprising. The peasants are shown wearing antifa-style red/black bandanas with bludgeons and Molotov cocktails in hand. The sheriff’s men are fascistic in appearance—dignified, orderly soldiers dressed in black uniforms. (It is worth mentioning that the strained attempt to render both sides recognizable to viewers as antifa and “fascists” respectively means that the latter end up looking better, in accordance with real life.)

The sheriff initially appears to be a Trumpian caricature who rants about the threat of a foreign invasion and the need to fight Islam. But we later learn that he and the cardinal are funding the Arabs in order to keep the war machine going and to antagonize the king (presumably Richard the Lionheart, then in the Middle East fighting for the English). He ends up being more of a Bush-like figure who gleefully ships young men off to die in the Middle East while declaring that Arabs “hate us for our freedom.”

This equation of villainy with treason, necessary for the film’s clumsy Iraq War allegory, somewhat undermines Bathurst’s negation of the patriotism/traditionalism of the original tale. This could explain his eagerness to make it clear which side his bread is buttered on. He also writes the king out of the picture, despite that Robin Hood’s loyalty to Richard the Lionheart (the rightful king) is a major theme in most retellings of the legend.

The casting of a black actor (Jamie Foxx) as Little John is another concession to political correctness. It has been customary in recent decades to make one of Robin Hood’s men a Moor, but the film takes this further by depicting him as an omniscient father figure and relegating the other Merry Men to the sidelines. They meet in the Middle East after Robin is drafted to fight in the Crusades. John is a master archer/martial artist who appears to kill off a number of Robin’s fellow soldiers and nearly kills Robin himself. The other English soldiers decide to kill his son in revenge. For some reason, Robin is suddenly moved with compassion for the faceless Arab guy who just killed a bunch of his friends and lunges at the other Englishmen. The boy is killed anyway, but this is the catalyst for Robin’s friendship with John.

John is the mastermind of the whole scheme and hand-picks Robin as his accomplice. Robin generally takes his cue from John and is the more dim-witted of the two.

The tension between the film’s Leftist signaling and the actual myth of Robin Hood is mirrored in its stylistic incoherence. It wants to be at once a light-hearted action comedy flick, a political allegory, and a serious, Christopher Nolan-style reimagining of Batman—John as Ducard, Will Scarlet as Harvey Dent/Two-Face, and Robin as our Caped Crusader (John as well: there’s one scene in which the sheriff channels Falcone by teasing him about how his son “begged” for death). It ends up a confused hodgepodge of clichés that disguises its uncertainty with sloppy, over-the-top special effects and pyrotechnics, a cheap knockoff of Batman Begins that’s impossible to take seriously.

The film also can’t settle on a time period. “I’d tell you what year it was, but I can’t remember,” Robin quips in the opening voiceover. The war sequence is something right out of CS:GO; the Arabs have machine gun-like weapons that can shoot several arrows per second. When not dressed like antifa thugs, the characters look like they’ve just walked out of a trendy modern clothing store. The dialogue is likewise anachronistic and uninspired.

There is only one good thing about this film: Taron Egerton’s archery skills. He went through extensive training for the role, and the results are impressive.

The best adaptation is the classic 1938 version, a magnificent Technicolor pageant with Errol Flynn as Robin Hood, Basil Rathbone as Sir Guy of Gisbourne, and Olivia de Havilland as Marian (plus a great score by Erich Wolfgang Korngold).

Bathurst’s Robin Hood postures as an anti-establishment fable, but it willingly submits to the system it professes to despise with respect to both style and content. The film yields to consumer capitalism by upholding a form of aesthetic eclecticism and cynically pandering to audiences with lazy action film gimmicks, and it yields to the system at large by aligning itself with current political trends and anxiously steering clear of taboo topics. It’s fitting that the costumes in this film consist of pretty much either antifa rags or trim designer outfits because, at the end of the day, both liberal elites and antifa are servants of the establishment in equal measure.