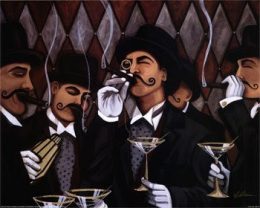 Avner rustled the Evening News, pursing fat lips to speak. “I say Machen’s got a damn fine piece about ghostly bowmen saving the boys at Mons in the paper!” Then, folding the page, he proffered, “Given the Boche a right bloody nose!”

“One thousand six hundred fallen, I’m afraid. Seems like the West Kents fought the Hun to a standstill with their Lee-Enfields blazing.”

The Baron sighed. “My interest lies less in the flesh broken than in the ordnance procured,” he replied distractedly. “Bullets, bayonets, swords, and howitzer shells, that’s the stuff. The fate of the Royal Fusiliers does not concern me one jot,” he added, puffing on a Joseph Samuel & Son Havana. Then, sipping a snifter of honeyed cognac, he added, “The more bloodshed, the greater the profit, my boy! Remember, with every whizz of a sixty pounder over the Conde canal echoes the ring of a cash register in Putney.”

Turning a surly yellow eye on Avner, he continued, “Our friends Mr. Lloyd George and that squirrel-faced Mr. Asquith knew that when they made good the assignment. Our money keeps them and their kind solvent. The library at the University of Leuven is only the first to burn, and the shining crowns of Tsars and Kaisers will fall, as was foretold at the meeting in Biarritz. Our friends, the Mocattas and Goldsmids, will not be denied their moment in the Sun. After all, look what investments they have made in the whole business. The Kahal Kadosh Sha’ ar Tziyon temple is testament to their commitment. By their prayers, like Shakespeare’s merchant, shall we demand our pound of living flesh.”

Avner nodded. “It is the butcher’s hour. Today the German First Army loses a limb, tomorrow the French cavalry their cockerel, and the day after, the Middlesex regiment will be subjected to a Sunday roast.”

The room fell silent. The skeleton rattle of carriage wheels rolling down St. James Street below the Nimrod Club’s open window resounded off the swirling vines, leaves, and flower patterns on the William Morris wallpaper. Montagu sent another blue plume towards the chandelier. “What news of our boats from the Caribbean?”

“Excellent! Our-broad shouldered lads from the Indies will be needed to fill the vacancies this war is creating. They bowl fast and smooth and will crack open some Welsh girls’ wickets, no doubt.”

Avner coughed into a clenched fist. “The word is that the dock workers are becoming restless, Sir Montagu.”

“Then we’ll play on Taffy’s prejudice. God knows that is a well-turned trick. The dullards will set a curse against Ol’ Edward as quick as they raise a toast to the legend of Owain. That is how we’ll get them. Send a message to the Alexander family in Bristol to pay for a team of likely lads to break any picket line they throw up against our mulatto brood. Damn it, there’s more to play for here than a cargo of bananas. Our vision is to bring Trinidad to Tiger Bay. The Land of My Fathers will resound to the sound of calypso.”

“I’ll send a telegram to the West Country first thing!”

“Good. Now on to other matters. What are the odds on that Arabian at Kempton?”

This brief fictional vignette was first read to the Silures, an intimate circle of kindred spirits who very occasionally gather to bask Inkling-like in the warm glow generated by a wood fire at the center of a stone-hearth, under a hand-carved dragon’s head, in a centuries-old inn buried deep in the Anglo-Welsh borderlands.