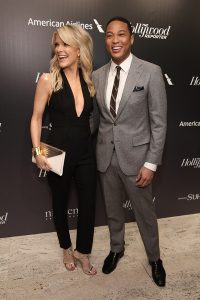 Megyn Kelly & Don Lemon in happier times. One still has a career.

The problem that arises when you’re the greatest nation in the history of the world is that there’s no real problems to deal with. There’s no war. Anybody who wants a job can get one. Nobody starves to death. Everybody has access to medical care. Even beggars can make six figures a year. [2]

But happily ever after breeds complacency. Once people get what they want, they tend to want something else. So, if life is good, and there’s no legitimate problems in paradise, abstract ones are created in La-La Land.

A few examples of these “problems” are things like “systemic racism” and “white privilege.” Or “transphobia” and “anti-Semitism.”

The reader is well aware of the “problems” to which I’m referring. In fact, most of you have likely been accused of being “part of the problem.” And it’s not even because of anything you’ve done personally. It’s just because of the color of your skin, and your assigned gender. Yes. I’m talking about white men.

Allow me to demonstrate my point. The narrative goes something this: White men created the greatest civilization the world has ever known, but that’s just because they were white supremacists. And now that they’ve used their superiority to make an amazing world that nobody else could’ve even imagined, let alone create, we don’t need white men anymore. So we’re going to use the “rights” that white men gave us to usurp his power.

Perhaps I’m being a bit vicious. Therefore, I’ll illustrate my point with this Salon article titled, “White Men Must be Stopped: The Very Future of Mankind Depends on It [3]”:

The future of life on the planet depends on bringing the 500-year rampage of the white man to a halt. For five centuries his ever more destructive weaponry has become far too common. His widespread and better systems of exploiting other humans and nature dominate the globe.

Does that mean it’s time for white men to be submissive?

Let’s be totally honest here. Excluding historians, and apparently the white man [3] (one Frank Joyce) who wrote that article, does anyone really care what happened five hundred years ago?

Before you say something racist or anti-Semitic, let’s analyze this using the Socratic method [4]:

Why would a white man write an article like that?

Are “human rights” a concept of white men?

What would philosophy be without white men?

Would we have electricity without white men?

Would the United States exist without white men?

What would science be without white men?

What would modern medicine be without white men?

If you haven’t gotten the point, just take any luxury or innovation that you can think of, and ask yourself, “Would this exist without white men?”

And if for one second you assumed that self-hating white men are the only people who think white men are the problem, you’d be wrong. The mainstream media supports that narrative as well. Like the tolerant folks over at CNN who allowed Don Lemon to make racist remarks about white men [5]:

Did Don apologize for his racist comments? Nope. He doubled down [6]:

I said that the biggest terror threat in this country comes from radicals on the far Right, primarily white men. That angered some people. But let’s put emotion aside and look at the cold, hard facts. The evidence is overwhelming.

Really? So, Don wants to “put emotion aside and look at the cold, hard facts” when he makes racist statements? That’s interesting. Somebody should remind him of that the next time he calls a white guy “racist” for opposing illegal immigration, or for discussing the disproportionate amount of black crime [7].

Here’s an intriguing thought: same scenario, but Lemon is white and he’s talking about a “black guy ban.” Would he still have a job?

No need to answer that rhetorical question, because we actually saw this play out recently when Megyn Kelly asked a seemingly harmless question [8] about dressing up in blackface for Halloween:

Look, I don’t even like Megyn Kelly. I haven’t watched her since Trump made her look stupid when she was with Fox News during the 2016 election. But she apologized [9] at the beginning of the next show, and she still got fired. And to be totally honest, I have no idea what she said that was offensive.

That epitomizes the tyrannical essence of American liberalism. A black guy can unapologetically say whatever he wants, but a white lady is fired for asking a question about a silly social norm, even though she apologized for it.

America has become the world’s leading manufacturer of “isms.” The reason for this is that we hit our peak in the 1950s, and have since then not only demographically changed, but we have evolved into the post-theological society that Nietzsche prophesied when he said, “God is dead,” going on to explain that “[t]he time is coming when the struggle for dominion over the earth will be carried on in the name of fundamental philosophical doctrines.”[1] [10]

These “philosophical doctrines” (i.e., “isms”) have become the catalysts for power. Essentially, they are ideological ponzi schemes which promise utopian returns, yet produce dystopian ruins. They take from one and give to another.

The twentieth century provided two obvious examples of post-theological societies which were governed according to philosophical doctrines: Communism and Nazism. Regardless of how one feels about either of them, their catastrophic results speak for themselves.

History predicts [11] that at some point in the twenty-first century, the United States will engage in a major war. If so, will liberalism play a role?

A liberal might read this and roll his eyes, and say something like, “The concept of liberalism is freedom and equality for the individual” (i.e., “muh individualism, but we’re all the same, though”). Maybe. But a lot of people also believed that Communism was the way to create a truly utopian society.

The concept of liberalism, and what neo-liberalism has become, are two different things. Liberalism has evolved into emotionally-based rhetoric that places people’s feelings above common sense. Not to mention, it’s also explicitly anti-white.

Fundamentally, liberalism is a secular version of Christian values.

Ideologically, liberalism is the god of the godless.

Metaphorically, liberalism is a snake that eats its own tail.